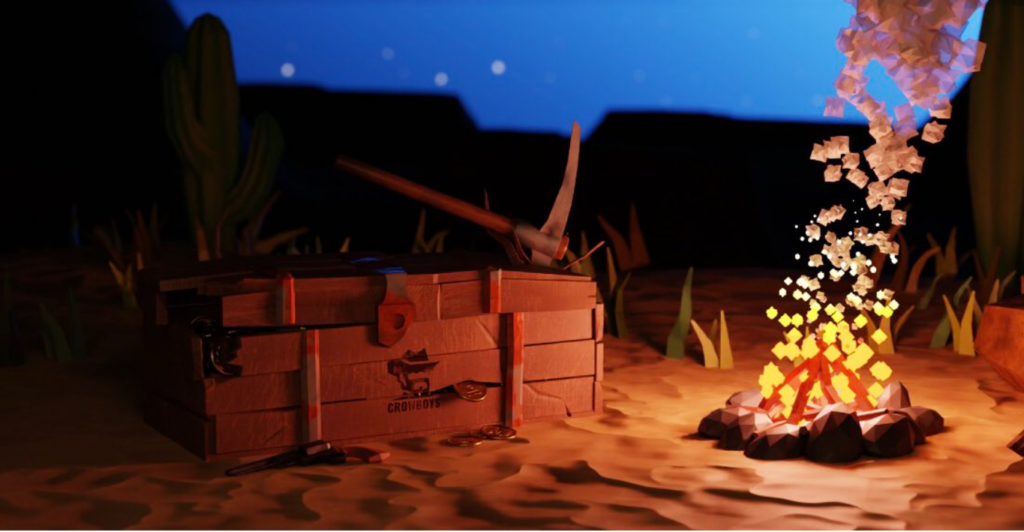 10 Upcoming NFT Games In May We’re Excited For!

As the blockchain ecosystem evolves rapidly, the games built leveraging the technology are becoming more and more competitive each day. This results in great versatility both in terms of the game genres and also the type of blockchain network the NFT games are built on.

Our list of the upcoming NFT games in May reflects this variety. We see new games are working at the edges of metaverse concepts combining genres like racing, open-world RPGs, card trading, and exploring different themes ranging from western worlds to Korean comics.

So, without further ado, here’s our list of the most exciting new NFT games in May 2022.

Crowboys is a western-themed shooter game built on Cronos blockchain. Each player becomes a crowboy in the wild west world and competes against other players in the compete-to-earn mode. You’ll need to own a 3D NFT avatar to join the game. The genesis crate collection goes live on May 5 on the Cronos NFT marketplace Ebisusbay. The collection will feature 5,000 unique crowboys NFTs.

There’ll also be a free-to-play option allowing you to play in the casual model if you don’t hold any Crowboys NFT.

An upcoming NFT game metaverse project is BNV. The focus of BNV is play-to-earn experiences tailored for fashion NFTs. The team plans to build a fashion-first metaverse by making fashion NFTs wearable and creating p2e income sources for the owners of these wearables. To this end, the first 1,000 high-end digital glasses, called Gs NFTs, are offered in Decentraland, and there’s a pre-sale 50% discount until May 4.

There’ll be two other NFT drops for the Gs NFTs. The holders will access the alpha version of the BNV metaverse and enjoy the staking and play2earn rewards.

Evergarden, the first open-world P2E RPG game by blockchain game developer Rakuen, releases the first NFT drop on May 6. The collection includes 1,000 Evergarden angel and demon characters. Players will use them as their game characters, and each NFT will function as an alpha pass to the game in development.

An upcoming NFT game backed by Solana is Blood of Yakuza (BOFY). It’s an MMO virtual world where players can earn rewards in BOYF tokens and in-game NFT assets. You can already play the test version; however, the first NFT drop is yet to occur but we expect it to happen through the end of May. The project will include more than 30,000 NFTs.

Scotch Noblemen, a confluence of an NFT staking game and a metaverse land DAO, will reveal its first NFT collection also in May. The collection has 10,000 generative NFTs. 2,000 whitelist spots will open in early May. Those who manage to get on the whitelist will be able to mint on May 15. The public mint is on May 18. Minting will take place on the game’s website.

The upcoming NFT game One World Nation (OWN) will release multiple casual games pegged to crypto markets. Each game character, known as Cryptonite, represents a real-world cryptocurrency. The genesis drop has 3,200 Cryptonites with four levels of rarities. The gameplay will have the breeding feature so that owners can create rarer characters and trade them for profit in the NFT marketplaces.

Built on the Avalance network, Xcart Racing is a racing experience in a metaverse called Zoria. The genesis NFT collection has 5,000 Zorian characters, and the mint is on May 25. The team will grant some privileges to NFT holders, such as a whitelist spot for future land sales, NFT breeding, and passive income through NFT staking.

#8 Rules of the Land

Rules of the Land (ROTL) is one of Korea’s most popular cartoon series. It tells the adventure and love story of the main characters Han Bi-Kwang’ and ‘Dam Hwa-rin’ for the past 28 years. The Dominus game, the studio behind ROTL, is now bringing its heroes to the Ethereum blockchain by releasing an NFT collection called “The Darkstorm Bringers.” It will have 5,000 unique NFTs. The mint is in May, but the exact date is not revealed yet.

The Solana-powered NFT metaverse project, Fancy Fox Association, will deploy a P2E trading card game. The genesis collection includes 9,189 Foxes. The whitelist spots and pre-sale will open in May. The public sale is in early June.

Another upcoming NFT game built on the Solana network is Cosmo Heroes. The project has a science-fi theme, and the first NFT drop includes 2,222 Cosmo Heroes NFTs. Owners will be able to stake their NFTs to earn the project’s native token, COSMO. The flagship game of Cosmo Heroes is called Cosmo Platformer. The team will also release mini lottery and dice games to reward the fans.

Since the NFT game industry is a fast-paced and highly competitive area, we suggest you keep an eye on the social channels of these upcoming NFT games to know about the last-minute changes.