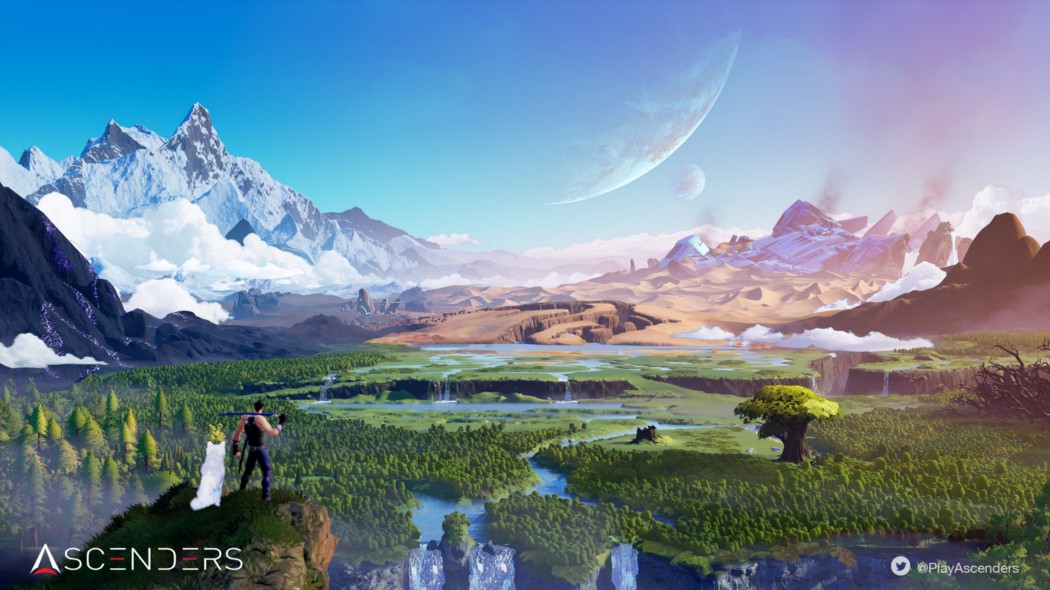 Ascenders run on the Avalanche blockchain, and it’s developed by the Legendary Foundry Games. The CEO of the studio is Jackson Poon, also the co-founder of Paramount Capital. Will Davis is responsible for the game development. He’s an experienced developer with over 35 years of experience in the industry. The game is designed by BAFTA award-winner Chris Rothwell, acting as the amazing design director of the open-world NFT game.

After crash landing on an exotic Alien world, you will be tasked with surviving, building, and exploring the beautiful world of Ascension. Fighting, crafting, and exploring make up just a tiny part of this vast game.

The game deploys a sci-fi fantasy theme. It has a genuinely player-driven economy where gamers build the game’s world and govern the development. In Ascenders, you can explore, build, and fight in a tremendous adventure-fueled environment.

The world of Ascenders is what makes the game so incredibly unique. As per their own description, the exotic world is strange and captivating. The world is largely untouched, with exotic and beautiful landscapes. The natural and vast open world has an incredibly full range of possibilities but also potential dangers and unexpected. Surviving in this unknown world is never guaranteed.

However, what makes the game so unique? The world may appear tranquil and scenic, but there is a deadly danger from the native Aliens in the new world. In the Ascenders world, you may encounter and interact with these Aliens. Some may be hidden in plain sight, and some may lurk below the surface. These aliens may threaten you and your survival in this unknown world. But, to conquer Ascension, you must fight and unlock mysteries.
In the world, you will gradually uncover mysteries, explore its history, and build your civilization in Ascension. With skill and technology, you can combat any potential threats, carrying out the fighting in the third person. Additionally, you can settle and build on the world of Ascension. By using what you encounter in the world, players can craft things necessary for creating a thriving community and economy. The more you build, the brighter and more vibrant the community and world of Ascension will become.

An open NFT world that its players command

As expected from the game’s genre, Ascender allows players to explore the world environment freely. But unlike many of the other open-world NFT games, it leaves the NFT creation in the hands of the players. They can create all NFT assets and build cities on NFT lands.

Players determine the supply and demand. They explore and discover resources to mint their own items and upgrade and sell them to other players in NFT marketplaces.

Players can specialize in different play-to-earn roles with their own economic loops. Decisions made while executing these roles influence the external world permanently.

There’re single-player and multi-player game modes. The game’s environment is divided into “overworld” and “dungeons”.

The team designed 3 reward paths for fans. These are all roles that can be played within the game in order to win rewards.

The Ascenders Governance Council (AGC) is the governance token that will provide the holders with membership in the Ascenders DAO. Members can vote on proposals for new features, for instance. The total number of AGC is capped at one billion.

Owners of AGC will be able to stake it, earn in-game rewards, and unlock bonus incentives.

The primary utility token is Glow Gems (GG). Players can pay for all in-game activities with GG. For example, to create NFT items like swords and armors or construct buildings on the lands. The NFT trading in the marketplace will also take place through GG.

The team will distribute all P2E rewards in GG tokens.

The entire game is not ready yet, but you can participate in daily events called combat challenges to start collecting Ascenders’ tokens.

A combat challenge features a short region of the actual Ascenders’ open world. In this game version, you participate in time attacks to discover containers within the world and earn rewards. It’s available on PC and Mac.

The team will release AGC tokens in May 2022 via a public sale. There are also countless changes titled in their roadmap for the upcoming phase 3. At the moment, there are 8 phases before the official launch of the game. Upcoming changes include the prototyping of gameplay and economy, a land sale event, an in-game guild system, and a Genesis Heroes sale event. This is all available in their roadmap, but if you want more regular updates, stay tuned by following the official Discord and Twitter channels.