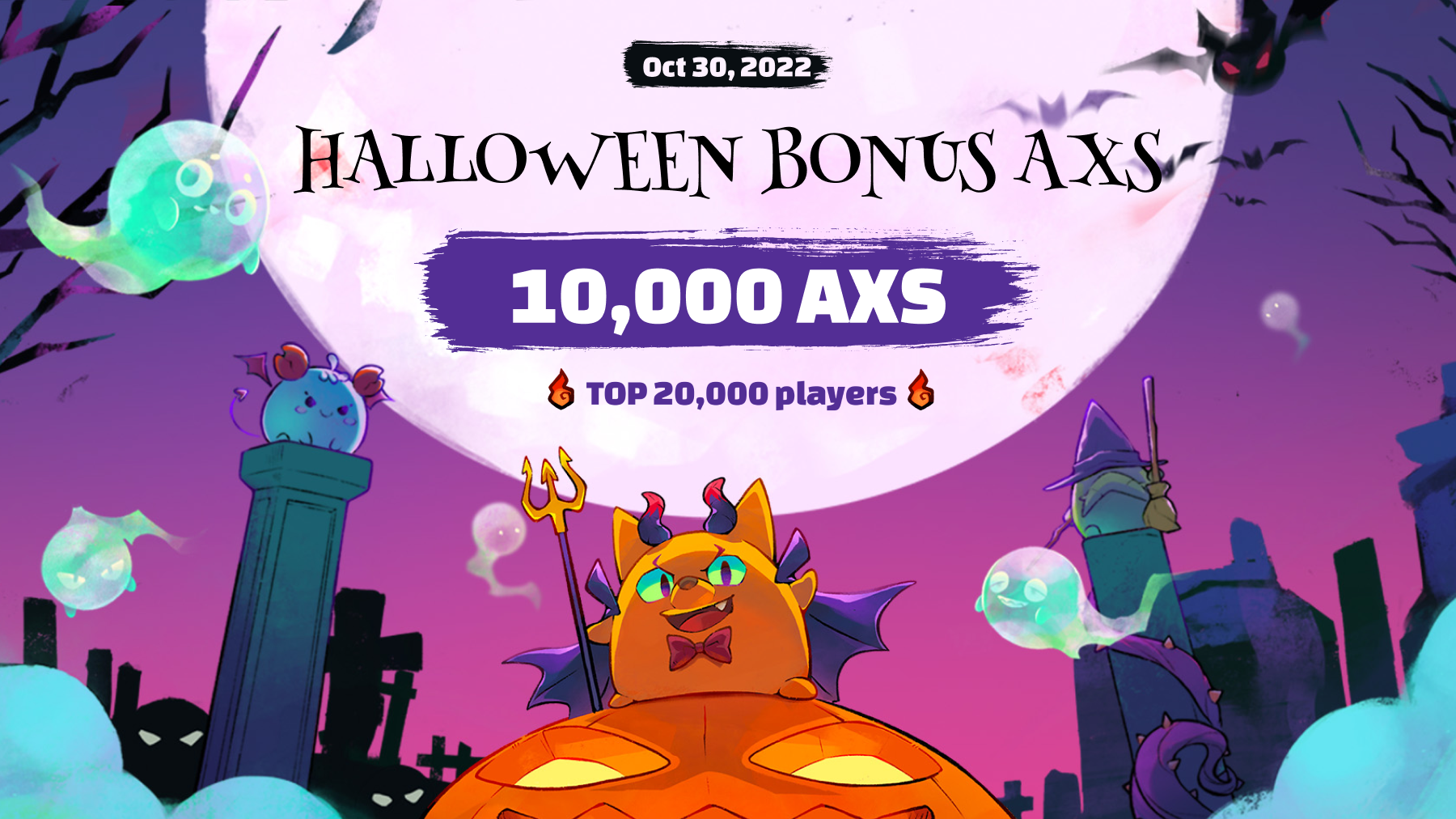 Axie Infinity, the popular play-to-earn online blockchain game, has announced that it will be rewarding users in a brand-new way. The announcement came in through the platform’s Twitter handle, with the promise of rewards for Axie Infinity players. The new rewards scheme is called the Halloween Bonus AXS rewards.

Axie Infinity primarily led the rise of non-fungible tokens (NFTs) and blockchain gaming. The game’s focus is a class of animals called Axies that are similar to Pokemon but have different appearances and abilities. The play-to-earn business model of the game contributed to its increasing popularity and crypto adoption.

However, the Halloween effect is a popular superstition among traders who believe that cryptocurrencies and other assets, such as stocks, perform better from the end of October (when Halloween occurs) until the end of May. This unusual belief is known as ‘the Halloween strategy’ or ‘the Halloween indicator.’

Playing hard through the middle of the season can be a grind! 🎃 To pumpkin-spice things up, let's try something new: Halloween Bonus AXS Leaderboard Rewards!

The top 20k players on Halloween will receive a prize pool of 10k bonus AXS.

Notably, the idea of the Halloween bonus AXS rewards arose, following the latest experiment carried out by the Axie Infinity team during the current season. With this, Axie Infinity seeks to give back to its community. Here is the breakdown of the announcement:

These AXS Rewards do not conflict with the Season 1 Leaderboard. Season 1 Rewards, including AXS, Avatars, and Borders, are to be paid out as usual at the end of the season.

Sky Mavis introduced Axie Infinity in March 2018. It is a real-time card-battle game developed on the Ronin Network, a side-chain connected to Ethereum. The foundation of the Axie Infinity metaverse is a race of fantastical beings known as Axies.

With a total of 2.7 Million daily active participants, Axie Infinity became famous as a good cryptocurrency game. The game’s developer, Sky Mavis, has made millions thanks to the game’s meteoric success.

The developer kept 17% of the $700 million in income from in-game purchases this year and is expected to earn $1 billion by year’s end. More than 2 million daily active users now make up the three-year-old Vietnamese startup, which was 38,000 in April.

Also, the recent $152 million Series B funding spearheaded by Andreessen Horowitz valued the game maker at an estimated $3 billion. The company’s valuation is lower than the market capitalization of its cryptocurrency because it does not possess all of the Axie Infinity tokens.

According to Sky Mavis, it will use the extra funding to introduce a new game, a decentralized economy, and an enhanced warfare system.

The Business Model of “Play to Earn”

Players purchase, breed, and compete with monsters called Axies in Axie Infinity to earn little love potions, the in-game currency that may be converted into real money. Players receive cryptocurrency prizes for participating in a game under the play-to-earn business model.

As a non-fungible token (NFT), each Axie is a unique collectible that can be purchased or traded on exchanges outside of the game. Players need at least three Axies, the most affordable of which costs roughly $200, to start battles. For 300 ether, which is almost $130,000, the costliest monster was sold in 2020.

With a market valuation of $7.5 billion as of October, the blockchain game, Axie Infinity has seen 2,100% growth in its native cryptocurrency since the beginning of July.

800,000 Axis Infinity Shard (AXS) tokens were airdropped to its early adopters earlier this month. It boosted staking capabilities, enabling users to lock away their tokens and generate new ones in exchange, bringing up the value of its coin.

Axis Infinity’s parent firm now boasts a 161% annual percentage rate of return. Staking is frequently compared to earning money. In return for their participation in games, votes, and staking the token, AXS holders will get dividends from Axie Infinity’s community treasury, which is now valued at nearly $2.3 billion.

The existing classic gameplay was upgraded with Axie Infinity: Origins. Just like Axie Classic, the following ideas are present in it:

For a complete list of upgrades, see the Lunacian’s official announcement.

Origin is essential to improve the current Classic gameplay. The gameplay in Adventure mode is repetitive for someone who plays Axie Classic. Many players become bored with this recurrence. Axie Infinity lost even more gamers as the price of $SLP dropped. Hence, Sky Mavis needed Origin as an improvement to attract more players.

However, the onboarding process differs at Origin. Before you could even begin playing Axie Classic, you had to obtain 3 NFT Axies. The cost of ETH gas and Axie were both relatively high in 2021.

This means that the high initial fees turned many people off. New players at Origin receive three starter Axies. More beginning Axies are available to these players as they advance. This will increase the number of players in the Axie ecosystem.