Axie Infinity Origin Enters Phase 3 of Season 0 – What Will This Mean? 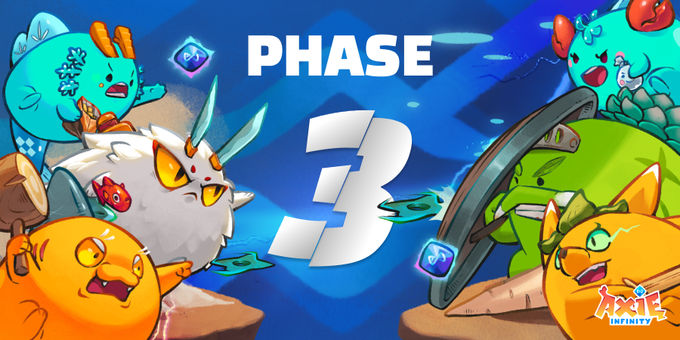 The recent roadmap for Axie Infinity has been released. Within this new roadmap, Axie Infinity Origin has entered phase 3 of season 0. We will discuss this news and what this will mean for AXS and the gameplay.

Axie Infinity is the exciting blockchain play-to-earn game that features small creatures called Axies. In order to play the game, you must battle Axies against each other. These Axies are NFTs, meaning they hold unique value. This means that Axies with better and more unique attributes will be more valuable than others. You can buy and sell Axies on the game marketplace and build your perfect team.

The Axies are unique cryptocurrency NFTs and can hold different values and attributes. The Axies and land in the game represent NFTs, meaning you can build your value and breed more attributes. Additionally, equipping your Axies with buffs and debuffs can enable you to earn more during battles. Leveling up your Axies with different attributes, from tails to horns, can put you at a battle advantage during battles, letting you earn real money.

What is Axie Infinity Origin?

Axie Infinity Origin is a release as part of the Axie Universe. The game was released in late April and was released via Mavis Hub. However, this release was stunted due to the hack of the Ronin blockchain network. This resulted in the thrift of over $600 million worth of cryptocurrency.

Axie Infinity Origin includes three free starter Axies and some new exciting gameplay features. This means that the game is more accessible for those who do not want to buy NFTs straightaway.

Axies can carry out their attacks straight away when cards are played. This differs from having to choose your cards at the beginning of a round in the normal gameplay. In Origin, Axie players can take turns using their cards. Instantly, this makes gameplay more accessible and entertaining for a wider group of players.

The game also includes new cards for Axie’s body parts, including the back, tail, mouth, horn, and earns. Although some of these are an upgrade to the previous name, Axie Infinity Origin has more detailed gameplay mechanics, allowing body parts to have their own cards.

The recent roadmap of Axie Infinity has released that season 0 has entered into phase 3. Recently, the market heat has been felt by Axie Infinity, with their token price decreasing and their game losing traction and popularity.

Phase 3 of season 0 Axie Infinity Origin includes SLP rewards in gameplay mode, with their removal in classic mode. Additionally, NFT runes and charms have been introduced. These require SLP and moon shards in order to craft them, but they can also be minted onto Ronin through the Ronin marketplace. Additionally, the leadership rewards have been adjusted, meaning the crafting and balancing systems have been altered for better gameplay. Towards season 1 of phase 3, all rewards, crafting costs, and card balancing will be expected to have huge updates and chances for the better.

The launch of Origin season 0 includes new updates, including the balancing patch and a huge general milestone in rebooting and improving the gameplay. These new upgrades attracted traders’ and investors’ attention when the price of AXS surged in late August. This price is expected to remain high and even become more valuable. As a result of this surge in price, the native token is priced a lot higher than it previously was.

AXS Price – How Will it be Affected?

In recent months, the price of AXS has depleted, and there has been significant backlash from avid players and investors. Axie Infinity fans claimed the game promised riches and delivered disaster from the crash of the game token. Axie Infinity co-founder Aleksander Larsen hit back at these criticisms, claiming that there were never any promises about financial gain.

The price of AXS increased from its previous 10% depletion due to the release of Axie Infinity Origin. However, this is not expected to last in the long term future. Game-Fi has continuously suffered with token prices, but games continue to release new updates and gameplay features.

With the release of Axie Infinity season 0 phase 3, the entire ecosystem is trying to work harder to come back from its crash. As we mentioned, the new features and gameplay benefits will be sure to get players interested and new players ready to start. However, it is predicted that this will not be permanent.

The release of Axie Infinity season 0 phase 3 has improved the price of AXS, but this is not expected to last. However, Axie Infinity Origin is continuing to add more exciting features to keep players engaged and get new players interested in the gameplay.