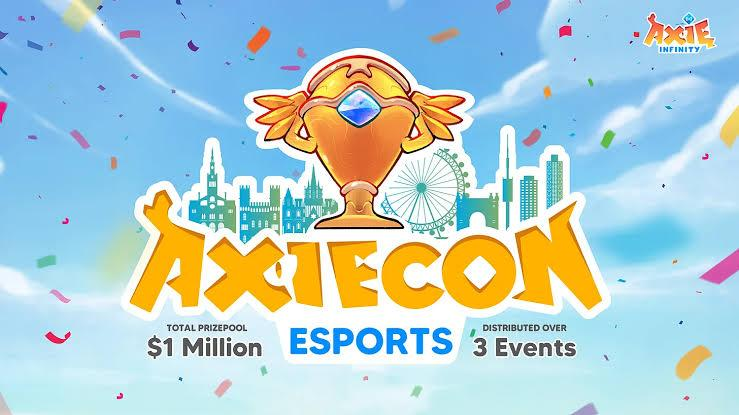 Web3 gaming has gone beyond playing in the metaverse or playing to earn rewards. It has gone beyond developers, players, and the blockchain network on which they operate. Now, Web3 gaming is about how these games affect the ecosystem and the players, as well as bringing players together as opposed to unhealthy competition.

With several events on the list, the just concluded AxieCon organized by Axie Infinity was a sight to behold. The event brought together as many players as possible on the Axie ecosystem in a bid to bring more exciting gaming ideas and promote healthy relationships.

Earlier this year, Axie announced that it would be holding a gathering of stakeholders in the Axie ecosystem in September. According to its announcement, the meeting will feature the greatest thinkers, battlers, and builders on the Axie platform. And activities will be cut across several areas like governance, collection, game design, and eSports.

True to its words, the platform hosted a gathering of fans ranging from newcomers who are awed at the magnificence of the Axie world to the seasoned Mystic-holding veterans in the ecosystem. The summit offered everyone a remarkable and unforgettable experience. The event lasted for four days – September 7, 2022, to September 10, 2022.

September 7 featured a registration party in which everybody present marked the attendance list. The party took place at the Go Beach Club, Barcelona, Spain. On September 8, the attendees participated in a guided run as part of the wellness programs planned by Axie. The registration for the Axie Origin BYOD, as well as the Axie Classic tournament started on the same day.

September 9 continued the wellness activity in which attendees had to participate in Yoga exercises. The day went on to mark the beginning of the Axie Origin BYOD and the Axie Classic tournaments. Later that day, a VIP & Mystic Holders Party was held at the Sea Garden in Barcelona.

AxieCon came to a close on September 10, 2022, after a series of events in a span of just four days. Prior to the end of the event, breathtaking activities took place, putting every guest in suspense and in a good mood.

September 10 – the last day of AxieCon – started with panel discussions. Among the issues discussed is making money in the metaverse. This was led by Tribally Games. Similarly, TechStars’ representatives, Saalim Chowdhury and Animoca Brands spoke about early communities in the Web3 space.

ESports was the final day’s highlight as the discussion centered on having eSports programs in the Axie ecosystem. Speaking on eSports in relation to Axie, Jason Lake of Team Secret explained that eSports does not only add to Axie’s standings but also solidifies its players’ interests.

“Having eSports programs within your community who really aspire for excellence ensures the longevity of Axie, as a community [and] as a game,” said Jason Lake. He added that “eSports is not going to be the focus of the larger community, but eSports has a value in the Axie ecosystem. If you lift up the best players at what they do, it invigorates your community [and] gives them something to look up to.”

MVP’s Thunderstruck banked on a quick advantage by utilizing his reflectile, earning him a win in the 2v1 scenario. However, Supercheria was not abandoned by the ‘gods’ as his God Bug, and crit gods earned him two straight wins, giving METAT8 its first championship at the event.

“The last turns were super intense, I thought I was going to lose,” Supercheria commented after the match. “This was the best experience ever. [But], I want to say a word about everyone who couldn’t come here. [The World Championships] without the Philippines is like [FIBA Worlds] without the USA. My heart goes out to everyone who qualified but couldn’t make it here.”

Similarly, the Axie Origin BYOD finals witnessed lots of drama and tension. It graduated from a battle of five semi-finalists in which QU3ST’s Spamandrice defeated METAT8’s YUUUUU three games to one. Moving on, Spamandrice defeated YCG’s Second Seed Zeliaser to secure his spot in the finals against METAT8’s 1437.

The final battle was a mixture of skill, luck, timing, and perseverance. The two finalists were considered equals, judging from their build-ups and attack mechanisms. Interestingly, Spamandrice took the lead by keeping 1437 at a two-nil distance. However, the tables turned after 1437 performed a perfectly-timed reverse sweep, snatching the championship win from Spamandrice. This also marked METAT8’s second championship win in the event.

“I’m just so happy, I don’t know what else to say,” METAT8’S 1437 commented on his win after the match. “This was not an easy road for me. I thought I was going to get swept so I tried something new that I wasn’t really planning for, and I’m just happy it worked out in the end.”

What Is Axie Infinity?

Axie Infinity is a popular online play-to-earn video game with a game design similar to that of Pokemon. The game is not only one of the most popular P2E games you can find – it is also among the biggest and most productive NFT projects in the Web3 space.

The NFT-based play-to-earn game allows players to collect, breed, trade, train, battle, and mint creatures known as Axies. Every Axies is unique, each with its strengths and weaknesses. Axies are customizable, with about 500 unique in-game traits available. Should players need to trade their Axies, the Axie Infinity marketplace is available for all in-game transactions. Furthermore, Axie Infinity runs on the Ethereum blockchain.