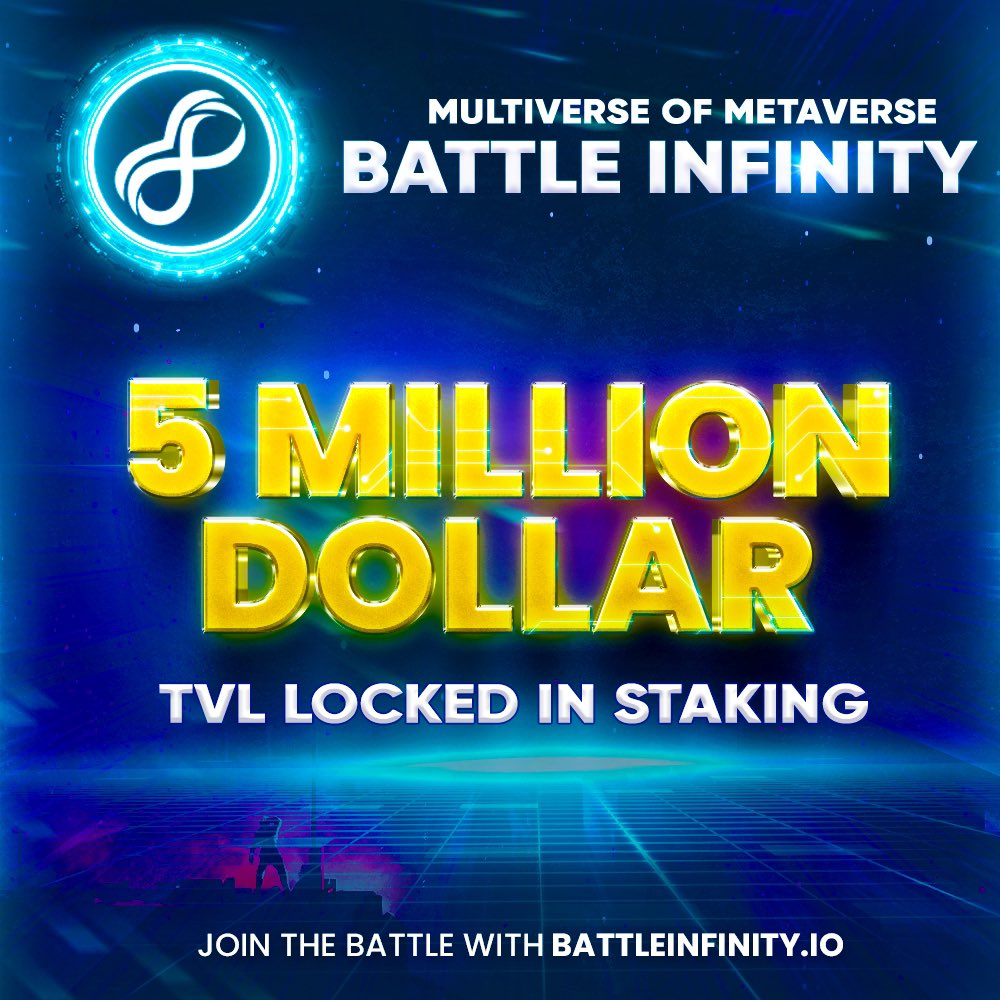 Over the last couple of weeks, the popular NFT gaming platform, Battle Infinity, has been encouraging users to participate in its staking program. The main purpose was to allow users to earn more- in form of yield – while locking away their tokens on the platform. According to crypto experts, this is one of the benefits of functional play-to-earn platforms.

Just yesterday, October 16, 2022, the top-class battle-based metaverse, Battle Infinity, announced that it had crossed a “humongous benchmark” of $5 million+ total value locked (TVL). This is good news as it implies that a reasonably large percentage of the IBAT tokens in circulation have been staked. Also, the staking program is in progress, and more users are encouraged to participate.

Notably, the announcement came after a series of tweets from Battle Infinity, in which the platform showed a total value locked up to $4 million. While users are encouraged to stake, Battle Infinity seeks to give more to them. And by staking their IBAT tokens, they can earn higher yields. Thus, allowing Battle Infinity to fulfill its promise as a trustworthy P2E platform.

Hey IBATers
we crossed a humongous benchmark of $5 million+ TVL.

This comes to a total of almost more than 50% of the circulation supply locked into staking.

As announced, the total value of IBAT tokens locked has just passed $5 million. With this, it is evident that a lot of users participated in the staking program. From a platform’s point of view, that is quite impressive.

While the news about the total value locked (TVL) is commendable, the report shows that more than 50% of the total IBAT tokens in circulation have been locked. As a result, the IBAT token is expected to increase in value. This way, stakers can earn interest on their locked tokens.

In September 2022, Battle Infinity took to its Twitter page to announce the launch of its staking program. The staking program aimed to give users, especially IBAT token owners, the opportunity to lock away their tokens on the platform. This way, they can get high rewards in form of yields. Notably, the minimum number of IBAT tokens for staking is 8,000.

Now is the time!

In simple terms, staking is a way to earn passive income. By keeping the desired number of crypto tokens on a blockchain platform, stakers can come back to collect their tokens after an increase in value. This is similar to the interests attached to money saved in the banks.

However, blockchain platforms do not lend out your tokens to earn interest. Rather than how banks work, they simply keep your tokens out of circulation, reducing the total number of tokens across the platform. This way, the supply is limited and the demand is increased. As a result of increased demand, the overall value of the tokens is increased, and stakers can receive the profits as their returns on investment (ROI).

In addition to the high yields, staking IBAT tokens reduces the tendency to sell. This way, the token gains value and increases demand. Additionally, stakers are the sole owners of their staked tokens and Battle Infinity ensures this by providing secured transactions.

The IBAT token is Battle Infinity’s native crypto token. The token is utilized as the metaverse’s way of rewarding users for engaging in NFT sales and purchases, in-game transactions, and as play-to-earn rewards. Also, it is backed by the functional infrastructure of the Binance Smart Chain, as a BEP-20 token.

With the token being the central point of all Battle Infinity games, it stabilizes the overall demand rate across the platform. According to Battle Infinity, the token offers more. This is because the platform seeks to “create a comprehensive gaming ecosystem with additional services and Metaverse integration.”

To achieve that goal, Battle Infinity employed 3 utilities for the IBAT token. Firstly, the IBAT token is suitable for paying out P2E rewards to players on the platform. Also, it is tradable and supports buying and selling of NFTs. Lastly, staking programs are carried out using the IBAT tokens.

As announced by Battle Infinity, there are two types of staking. And each comes with its benefits.

The first type is Flexible Staking. This type of staking gives stakers the chance to lock certain numbers of tokens on the Battle Infinity platform and get 12% annual percentage yield (APY). After getting their interests, they can either choose to re-stake or withdraw them at any time.

Next is the Locked Staking. As opposed to the flexible staking option, stakers can choose to tap into a higher level of discipline by locking a specified number of tokens. This type of staking attracts higher rewards as well as ‘punishments’ for not sticking to the agreements.

Basically, the locked staking option is a form of fixed staking. That is, a specified number of tokens must be locked for a fixed period. If a participant decides to un-stake before the specified time, he will be charged 10% fee and he will forfeit his staking rewards.

Battle Infinity is a popular battle-based gaming metaverse that offers exclusive experiences to users. By playing on its platform – called the Battle Arena – players can engage in battles and earn rewards as well as watch ongoing battles.

Additionally, the platform has quite some features including:

Battle Swap: A decentralized exchange (DEX) that grants users access to IBAT tokens and supports the conversion of rewards to other currencies. It has functions similar to that of banks. Also, it helps to make the user experience engaging, swift, and smooth.

Battle Market: Here, tokenized assets are accessible. On the market, players can access in-game assets like NFTs, with each being unique. This way, each NFT acquired by a player belongs to him alone.

Premier League: Notably, the IBAT Premier Leaue is the first decentralized blockchain-based NFT fantasy sports game in the world. Integrated with the metaverse, users can create their dream teams and earn while challenging other teams around the world.

Battle Games: This is a multiplayer game store that grants users access to various games on the Battle Infinity platform. Here, they can sell or purchase gaming characters as well as NFTs.

Battle Arena: From upgrades to avatar customization, the IBAT Battle Arena accommodates all users. Here, they can utilize their characters or avatars for various purposes, as desired.

“Our vision is to bring a new revolution to the traditional world of the gaming industry, by integrating gaming with the metaverse and blockchain making it completely decentralized, giving users and creators true ownership in which the gaming ecosystem is completely tamper-proof.” – Battle Infinity developers.