$50 straight for the retweet with the most likes🧡

Cozy and informative talks for some interesting topics

Read on to learn about the event and other exciting opportunities at the event. 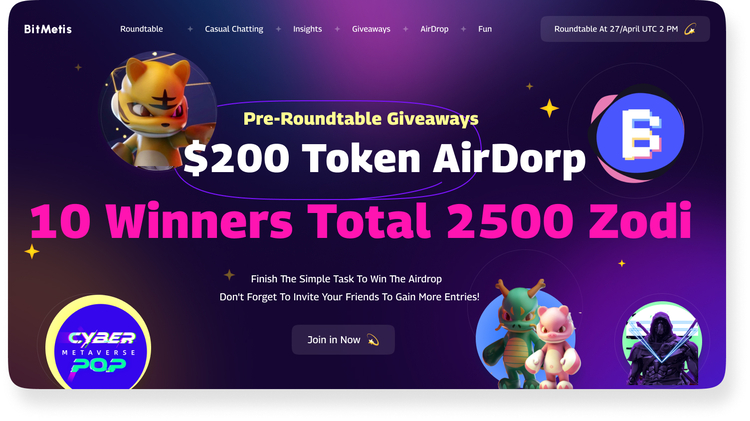 Bitmetis is the first open and decentralized integrated GameFi and NFT infrastructure. The firm boasts of a leading guide and data and guide provider for games and NFT projects. The upcoming AMA event, hosted by BitMetis, is the third of its AMA event series.

The AMA (Ask Me Anything) event features play-to-earn animated NFT series, Zodium as the hosts of the event. Like the theme of the event, these firms foster reshaping GameFi with innovative NFT projects.

There are tons of exciting traditional games, which is definitely not a new thing. However, the advent of earning while having premium gaming fun is an innovation that has taken the gaming world by storm. Yet, GameFi cannot have been GameFi if not because of DeFi and NFTs.

NFTs are the most basic gaming assets of the game; they constitute the assets and resources like lands, in-game characters, weapons, costumes, and so much more. Apart from allowing players to participate in the game, they also serve as earning rewards.

The event will be held on Twitter Space, and it will feature top figures in the crypto and NFT space, including AAA level NFT and GameFi metaverse CyberPop metaverse. Other notable figures including

Apart from benefiting from the eye-opening theme of the event, BitMetis and Zodium also announced airdrop giveaway and token rewards for participants at the event.

To be eligible for the airdrop giveaway, participants must head to the BitMetis AMA page and click JOIN THE BOUNTY. Afterward, they must complete some tasks to win BitMetis points. They can also increase winning chances by referring friends to earn more BitMetis points.