Build The Most Powerful Army In the Metaverse: Kardomance NFT Game

Kardomance is an up-and-coming Ethereum based NFT and play-to-earn card game. The game is set in a fantasy metaverse, and it features unique and exciting gameplay. In the game, players use their NFT assets to fight and compete for in-game rewards.

Kardomance is not the first of its kind in the blockchain ecosystem, nor is it the first crypto card game. However, the game aims at bringing a better card gaming experience than its popular counterparts in crypto gaming.

Features of the Game

Its unique features rely on three innovative core points; replayability, where each game is unique on its own. This will, in turn, create a unique player experience where each gameplay is newer and more exciting.

Secondly, the simplicity. Here, players can easily play and earn rewards regardless of their level. Players can also apply simple to complex gaming strategies and decisions to win their game.

In addition, the game is streamable; therefore, easy to play and watch seamlessly at the same tune.

Apart from in-game features, Kardomance is built on a powerful Unity game engine. Meanwhile, its ecosystem is powered by the ultimate layer 2 ETH solution, Immutable X. This will ensure users benefit from a zero gas fee and extremely fast transactions. 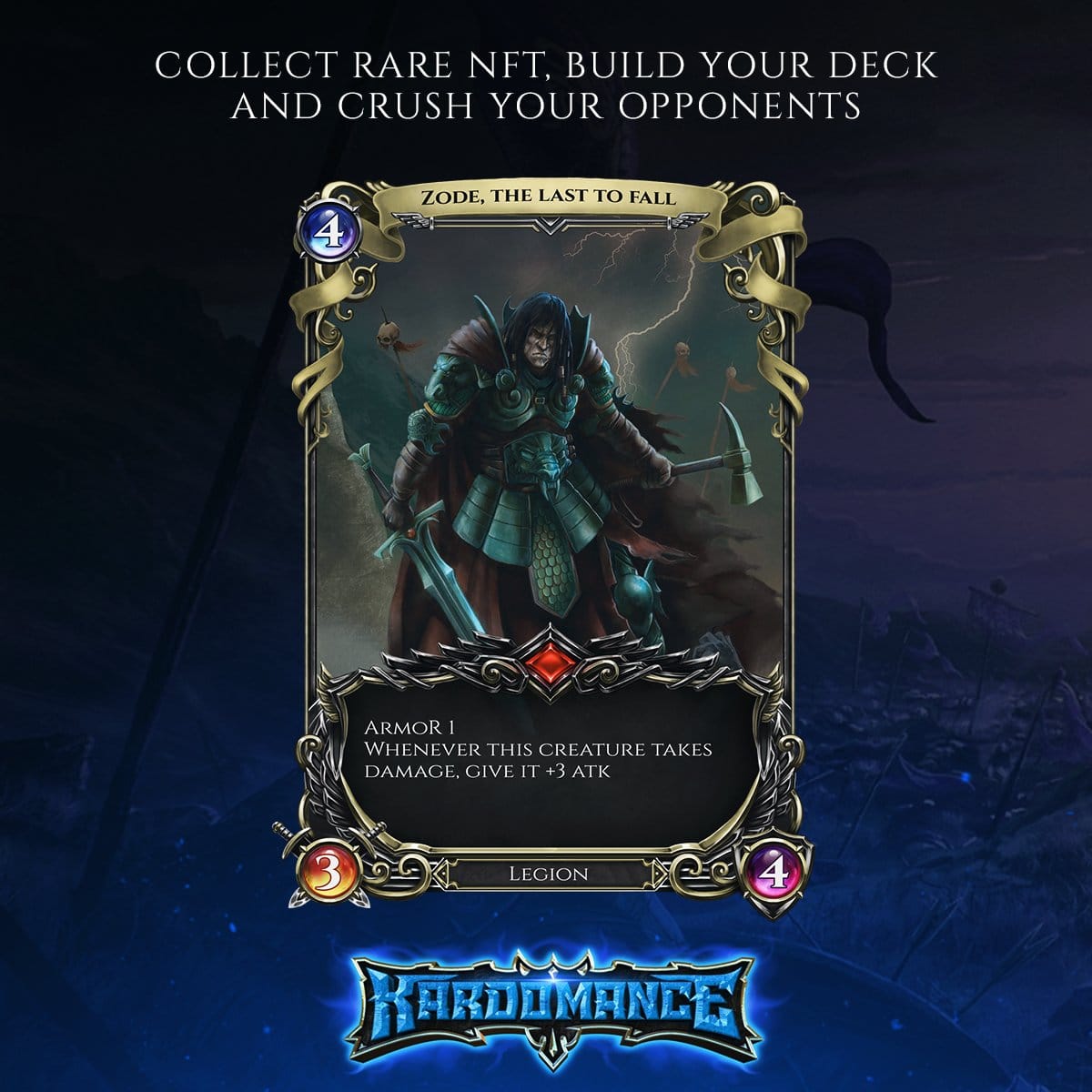 Kardomance, as one of the few card games in the crypto gaming ecosystem, is a competitive card game with a unique turn-per-turn gameplay. In the game, players can square out with their opponents with a 30-card deck.

To win each game, players must strategically defeat and reduce enemies’ HP to zero by summoning cards. Players can summon cards to battle players with mana. Meanwhile, each card can be spells, powerful creatures, or weapons that can damage the opponent’s HP.

Fortunately, each hero and gaming character has special evolutive abilities that can serve as an in-game advantage for players. Therefore, they can evolve and repeal damages to increase the winning rate.

The battleground in the game comprises two parts for each side of the contestants. Each side can apply bonuses to their sides before starting the game and pulling out their deck fragments for battle.

In Ranked Matches, players square out with themselves to earn valuable positions on the game’s leaderboard. Players can earn token and NFT rewards for achieving and maintaining a good position on the game’s ladder.

In the Arena mode, players must select 20 decks of cards to face an opponent in a series of gameplays. The best player must have at least 7 wins. Meanwhile, the higher the wins, the higher the reward.

How to Earn With Kardomance NFT Game

Kardomance’s innovative gameplay is certainly one that will attract the gaming multitude. Additionally, it features exciting, rewarding models for its players. Firstly, Kardomance is a free-to-play NFT game. With this, players can join with zero entry free. Also, all decks of cards are free to acquire and unlock by participating in the gaming activity.

It also comes with a play-to-earn model powered by a vibrant in-game economy. Players can earn token and card rewards for winning different game modes and rank high on the leaderboard. Apart from this, players can also earn according to the number of games they play per week. Therefore, like in the Olympic games, you don’t have to win but participate in the game.

Another way to earn with the game is via its passive invest to earn model. Here, players can earn passively by investing and staking their NFT-based assets, including cards, cosmetics, or tokens, to yield rewards. Apart from yield rewards, stakers will also have access to exclusive game modes and tournaments with huge prizes. They will also have increased card value and token bonuses.

Although the gaming and its ecosystem’s economy are still under development, there is an extensive roadmap and tokenomics for the game. The game will feature an in-game token. Also, the native token will be its main reward token. Meanwhile, it is most likely that the token is an ERC-20 token. Meanwhile, only 28% of its supply will be allocated to gaming and P2E rewards.

The other part of Kardomance’s economy is the NFT assets. The main NFT assets of the game are the card collections. The card holds different information, including the cost, name, capacity, attack, and health points. Also, it holds information on the card tribe and border. 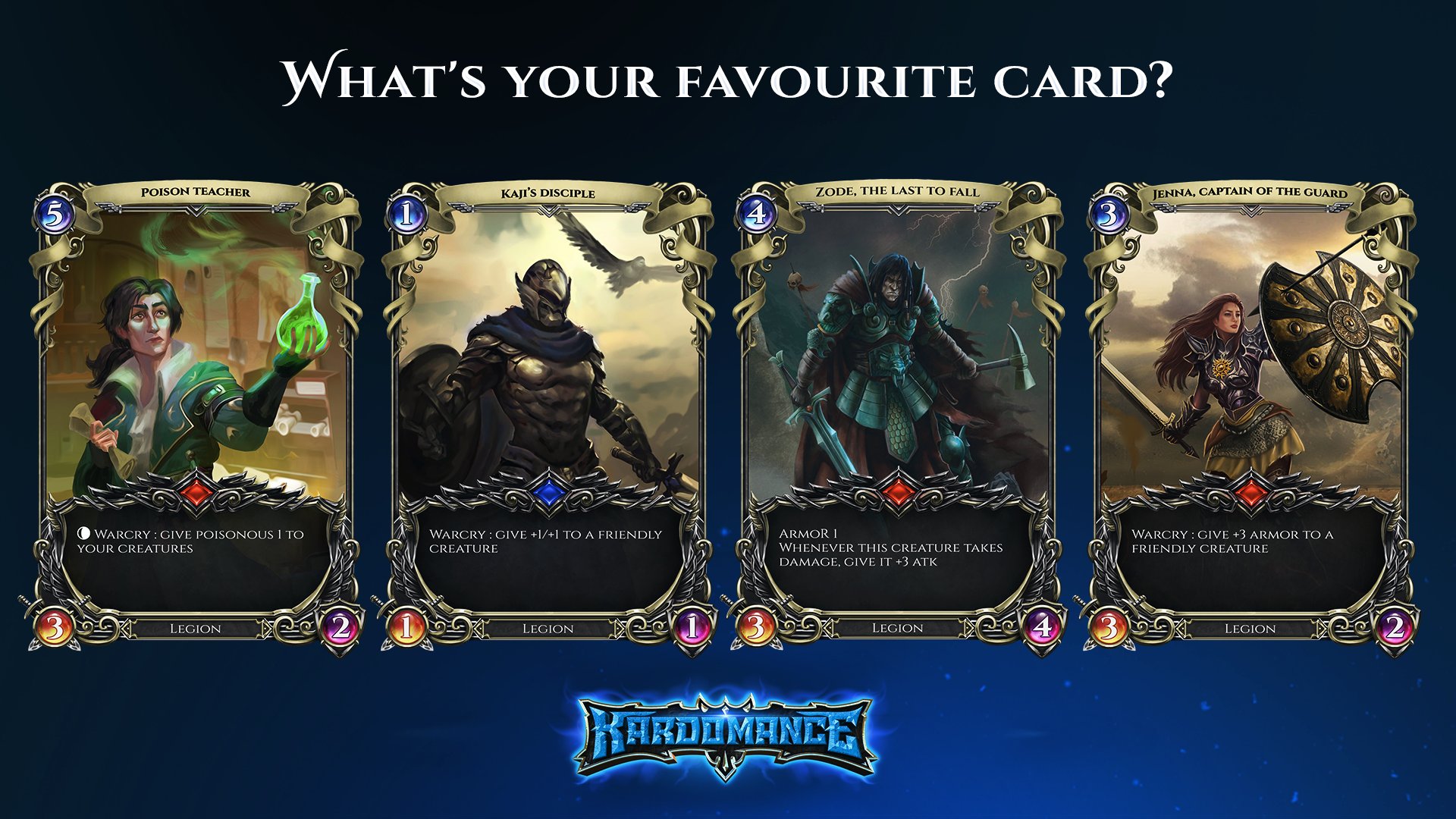 The collection consists of 18,500 NFT cards.

Kardomance is developed by a small team of crypto game developers. Cyprien Claudez leads the team as its founder and game designer. Its lead illustrator is Laurent. The game also has tech and blockchain experts, marketing agencies, and several partnerships under its belt.

The game has a small social presence. However, it is not too bad for an up-and-coming game since growth will be rapid. The game has 2,100 Twitter followers and more than 3,300 Discord members.

Meanwhile, roadmap activities continue in 2022 with exclusive in-game economy development. There will be NFT sales, pre-sales, marketing campaigns, and game trailers. Finally, alpha testing will come up in Q2 2022. Token sales and ICO will follow in Q3.

Apart from the whole game and gaining experience, the Kardomance team plans to release short comic stories and movies for its fans in its verse.