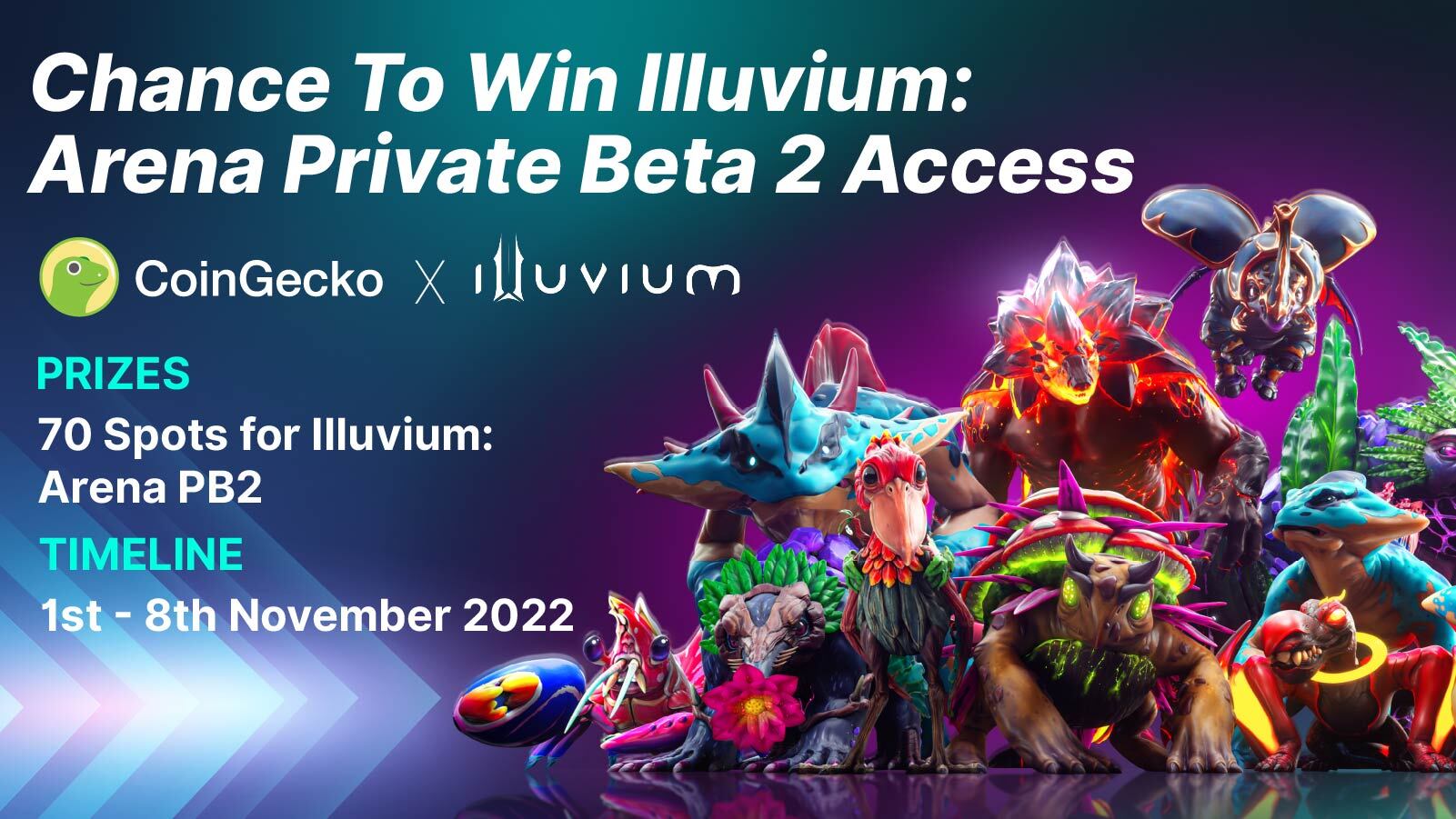 The Private Beta 2, an upgrade from Private Beta 1, is embedded with many new features. With the upgrade, Illuvium seeks to improve its users’ overall gameplay by giving them more unique experiences on the platform.

With CoinGecko on board, Illuvium will grant users exclusive access to the campaign. Users will battle waves of beasts and compete for a spot on the leaderboard. While users can join through this link, they can also retweet the announcement and tag two friends for bonus entries.

🔥Ready for a beast battle?🔥#CoinGecko partners with @illuviumio to bring users exclusive access to Illuvium: Arena Private Beta 2. Battle waves of beasts & compete for a spot on the leaderboard! ⚔️

Crypto gaming platforms are now one of the leading forces driving cryptocurrency adoption (NFTs). Prominent narratives focused on the metaverse, and non-fungible tokens are responsible factors for this.

Consequentially, a lot of investors are now considering top gaming tokens in terms of market capitalization as potential investment opportunities. However, within the cryptocurrency gaming platforms where they are employed, Illuvium game tokens serve a number of purposes.

The decentralized game studio Illuvium combines internet gaming and bitcoin. They create NFTs that are versatile and dynamic. More so, they have a high production value included in a number of games with a play-to-earn component.

CoinGecko keeps track of price, volume, social media, and developer statistics. CoinGecko debuted in 2014 by Bobby Ong and TM Lee as a cryptocurrency data aggregator. The business has produced bitcoin research with Western University in Canada and Humboldt University in Berlin.

The CoinGecko mobile app allows users to follow cryptocurrencies on iOS and Android. According to CoinGecko, the cryptocurrency data aggregator tracks over 3,587 tokens from more than 259 exchanges. It also generates over $3 million in revenue annually.

On CoinGecko, users can monitor the values of over 10,000 cryptocurrencies in more than 50 currencies. Along with BTC to USD and ETH to USD, popular cryptocurrency combinations also include SLP to PHP.

Illuvium earned a name among the Ethereum-based crypto games that have swept the world since its 2021 release. This is due to their ground-breaking concepts of auto-play Fantasy MMORPG and DAO integration.

Illuvium is a blockchain-based cryptocurrency game. It provides players with more than just a conventional gaming experience. Illuvium’s players actively participate in a play-to-earn feature and secure themselves a potential revenue stream.

Illuvium received $5 million in a seed round in March 2011. The money was a donation from Framework Ventures. The company is a renowned venture capital firm in the decentralized banking industry.

As one of the most decentralized NFT games, most investors consider the game a profitable venture. Consequentially, this increases the long-term value of investments in Illuvium cryptocurrency and its NFT assets.

Illuvium is a collectable 3D fantasy role-playing game on the Immutable X network. From its development in Unreal Engine 4.26, players can explore the environment, collect alien beats, and participate in competitive combat. Illuvium has a combat system modeled after Pokémon.

According to Zipmex, it is a Massively Multiplayer Online Role-Playing Game (MMORPG) NFT game developed on Ethereum Blockchain. In the game, players can search an imaginary open world for places where Illuvials live and capture them to use in team combat.

It is crucial to understand that over 100 Illuvials remain undisclosed. Due to their diverse affinities and traits, Illuvials can complement or conflict with one another, depending on the situation. Players must employ a skilled mix of Illuvials to defeat the rival team’s Illuvials team and win the game.

Significant changes have been made to almost every game area to make it more exciting. Illuvium’s Private Beta 2 now presents greater challenges than Private Beta 1. Also, a test of participants’ capacity to overcome difficulties is one of the campaign’s new features.

Almost every Illuvial received considerable improvements, but the game’s core gameplay has also undergone some adjustments. Players are now competing to see who can win the most battles. In addition, players can now employ several tactics because of new improvements, including unit placements, unique powers, synergies, augmentations, and bonding.

Additionally, Private Beta 2’s exclusivity signifes richness in value and substance. This is one of the Illuvium metaverse’s advantages. Illuvium’s co-founder stated that the objective is to “have zero tech debt by the time we get out of Beta”. This is notwithstanding, even if the primary goal of the upgrade is to give gamers a distinctive gaming experience.

Illuvium is one of the rare games with so many user-oriented packages for a global-scope project. It has more than 100,000 users of the platform interested in joining the ecosystem. Additionally, its partnership with CoinGecko is a genius move towards wheeling more users into the metaverse. So, if you still need to jump on the metaverse bandwagon, now is your opportunity.