Crowned PEGA Coming to Pegaxy! Here’s What You Need to Know… 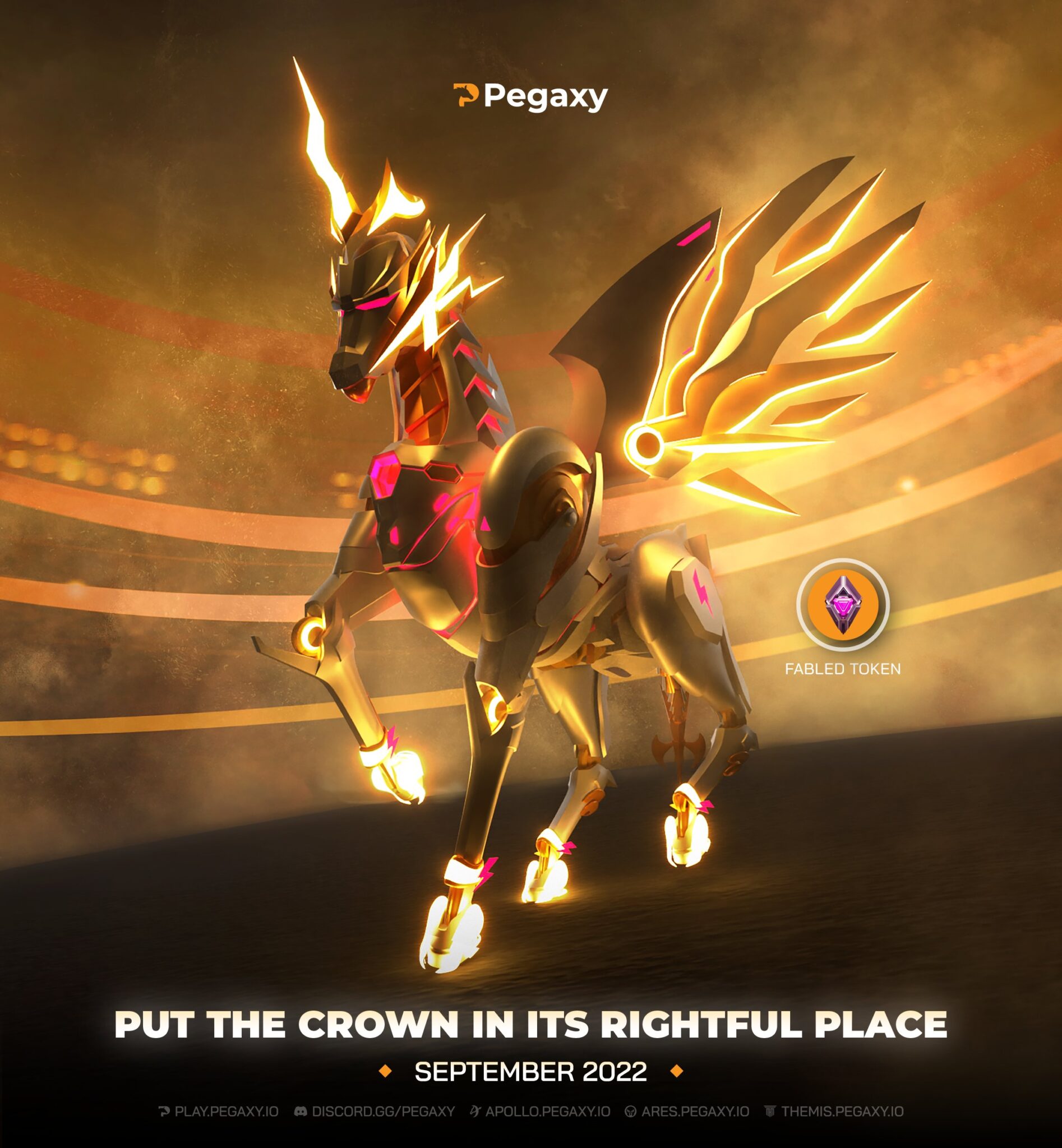 Pegaxy have announced the release of Crowned PEGA in September 2022. This release will make it possible for players to access more Crowned PEGA using their Fabled Tokens. Pegaxy is a relatively new game, so they are constantly adding updates. They work from a detailed roadmap, where you can see all the upcoming updates.

Pegaxy has stormed the metaverse world with its play to earn horse racing gameplay. The game operates on the MATIC – Polygon chain. The project was first introduced in February 2021, and players have been loving it ever since.

When playing Pegaxy, players compete to be in the top three amongst fourteen other racers. Each race includes random elements that will affect the placement of your horse. Players are urged to use food, skills, and upgrades to get into the top three. If you manage to come out in the top three, you will win VIS tokens. Pegaxy is unique because you can play the game without spending a single dollar. Of course, the more you spend, the better your chances of winning.

As a pretty new game, Pegaxy has become extremely popular amongst card game lovers and horse racing lovers. In their 2022 roadmap, they achieved a great deal, and they are continuing to grow and progress. With the beta release of the 3D game released in Q4 2021, the game has attracted a huge range of gaming and crypto fanatics.

In April 2022, official creators announced that there would be a mobile app available in beta mode. This was a long-awaited decision, with many users excited about the mobile version.

In May 2022, Pegaxy introduced a pretty big update. This update consisted of a redesigned marketplace, a lobby section, and a breeding enhancement. As of May, the game had over 20,000 active users, which is a lot for a relatively new game.

Additionally, Pegaxy released their 3D version on mobile in Q2 of 2022. In the past few months, developers have also been busy releasing the new drop system and drop racing, the loot box/gacha system, along with the initial sale of Pega food for the Pegas. As you can see, the developers have been continuously busy, and with the release of the new Crowned Pega game, the future looks bright.

What Are Crowned PEGA?

The Crowned PEGA is known to be one of the top collective items in the Metaverse, with amazing value. Pegas need to be evolved in Pegaxy, and in order to evolve to the Crowned PEGA stage, you will need five Fabled Tokens.

The Crowned Pega is coming in September, with a lot of competition. Fabled Tokens were sent out in November 2021, with one referrer receiving 32 tokens in total. So, those with the tokens can look forward to this Crowned Pega update dropping in September.

Additionally, Fabled Tokens became available on the marketplace in April, making it even better for those who are desperate for a Crowned Pega.

In Pegaxy, you are able to breed, sell, rent, merge, and race your Pega horses in order to win tokens as a reward. Without these tokens, the game is pretty useless. With the tokens, you can upgrade your Pegas, with better opportunities. The more tokens you have, the more you can upgrade your Pegas and win as many races as you can. Let’s look at some of the different tokens, what they mean to Pega, and the release of Crowned Pega.

Governance Tokens (PGX) are located on the Polygon Layer 2 chain, and there are not many ways to earn this token within the game. It is likely that you will use these tokens for your breeding fees, purchasing new Pegas, staking, and receiving as part of tournament rewards.

The Utility Token (VIS) is the main spending and earning token within the game. The token is minted when players come in the top three, and it is burned through the breeding of Pegas. The token is also used for breeding and fusing, and the amount required to do this will depend on the type of Pega.

Finally, the Fabled Tokens are powerful tokens that are difficult to find. With Fabled tokens, you can evolve your Pega into a Crowned Pega.

The Future of Pegaxy

Their roadmap entails a lot of the upcoming updates and developments within the game. After the release of Crowned Pega, there will be a lot more to come. Firstly, there will be a Pegaxy stable management, making it easier for players to keep on top of their Pegas. Additionally, Pegaxy will be adding a quests system. Lots of NEFT-based games have quest systems, such as Splinterlands. Quest systems allow players to earn additional tokens through extra quests that are not the main races.

There will also be a skill-based gameplay mode, where players can race based on skills alone. Additionally, there will be the introduction of the community treasury in Q3 of 2022. This will entail information about updated fees from the marketplace, and Pega breeding.

All of this is super exciting, but Q4 of 2022 looks even more exciting for avid Pegaxy players. There will be a Pegaxy satellite, the introduction of staking PGX into treasury, ranking and new competitions, battle pass, and a black market. These developments could change up the whole game, and attract a whole new range of players.

The upcoming Crowned Pega release is going to be an exciting development for a lot of Pegaxy players. The access to Fabled Tokens on the marketplace is going to get people talking about Pegaxy for the rest of the year.