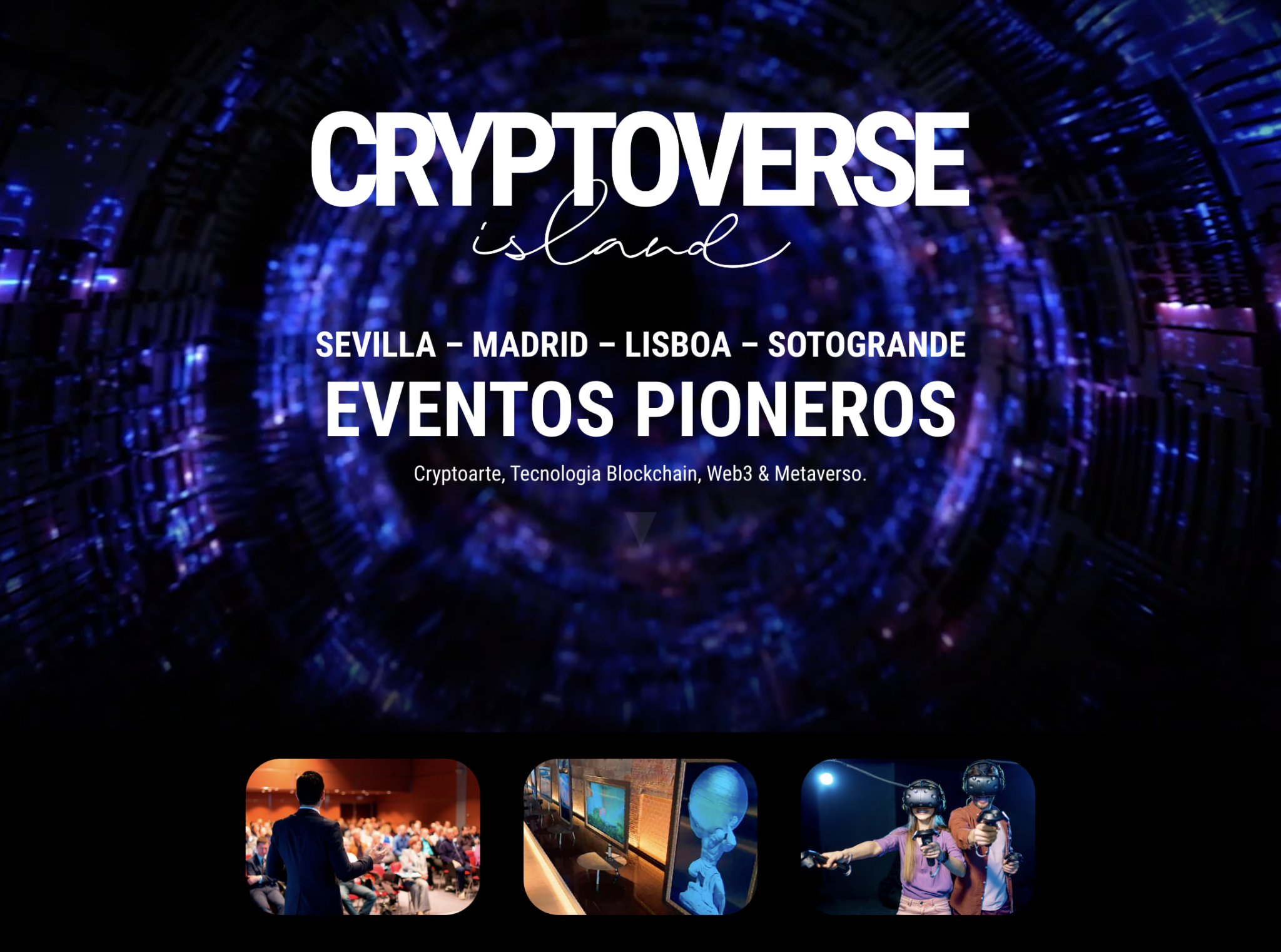 CryptoVerse Island and WISe.ART, a vetted NFT Marketplace powered by WISeKey, a top cybersecurity, AI, Blockchain, and IoT company, announced today that they will collaborate to host the Cryptoverse Island physical NFT exhibition.

What is Cryptoverse Island?

They partner with some of the greatest businesses in each industry, such as Vicox, WiseKey, Samsung, Grupo Prisa, or to cover all the requirements in the creation of high-quality events and settings that promote innovation, investment, and the advancement of art and technology.

What is the Main Cryptoverse Island Event?

This is a physical art show including some of the most prominent digital artists in the world and is organised by Cryptoverse Island, together with talks by notable speakers, networking opportunities, and presentations that foster collaboration between attendees and businesses.

Madrid Cryptoverse Island will combine a digital art exhibition with conferences on ART & NFT, Blockchain, Web3, and Metaverse, as well as a networking session and a presentation of our new projects for 2023.

What does the main event involve?

On WISe.ART, the trusted NFT platform of WISeKey, a selection of the most cutting-edge NFT artwork produced by eminent worldwide artists will be offered for sale during the Seville event.

With a sole focus on the digital medium, Cryptoverse Island is the first NFT art exhibition in Europe to provide ‘phygital’ (hybrid physical and digital) art packages.

The event will see the transformation of Seville’s renowned Auditorio Nissan Cartuja into an amazing immersive viewing experience presenting the most interesting and valuable NFT art in the world.

What are the Agripina Awards?

The Gala for the Agripina Awards will coincide with the art show. For the first time, there is a category specifically created for NFTs at the Agrippina Awards, the festival of choice for individuals working in the advertising, marketing, and communication fields.

How are the NFTs presented?

On big, high-tech screens and high-definition graphic projectors, the eye-catching investment and collection pieces will be offered for sale.

The NFTs will be sold during the exhibition on the new entrusted NFT platform,

WISe.ART, the fully-fledged platform secured by WISeKey technology that guarantees an authenticated and signed version of the actual digital asset, provides proof of ownership and provenance and includes a set of smart contracts Terms & Conditions outlining future use and monetization streams.

Eden Gallery have a bunch of information about Crypto Art if you’re interested in diving deep into the topic. Even top tier outlets such as Esquire are covering the topic.

Spanish national Javier Arrésis one of the most well-known crypto-artists in the world. Among other honours, he was nominated as a pioneer and won the Illustrator People Choice Award Creative Pool 2017 and the London Art Biennale 2019 awards.

He is an Andalusian who lives and works in Fuerteventura. He is renowned for his extraordinarily detailed artwork, which includes cities, complex machinery, and impossible fantasy gifs called Visual Toys.

Among his clientele are The New York Times, The NFL, Corriere della Serra, and the most significant collectors. More than $1 million worth of his NFTs have been sold.

One of the most influential digital artists of the 21st century is Gala Mirissa from Spain, who was born in Barcelona. For the next Jennifer Esposito-directed Hollywood film “FRESH KILLS,” she is an exclusive NFT artist.

Gala also created extremely rare Freedom NFTs for the movie at a cost of $300,000. On International Women’s Day 2021, BeInCrypto named her as one of the three most influential Hispanic women in the cryptocurrency industry who use NFT (non-fungible token) technology and are among the top sales in the rank list of NFT by CryptoArt.io.

The first NFT was made by Gala for ELLE magazine, and it was featured on the cover last month. Gala has a lot more to say as she continues on her path to greatness. She will be showcasing unique NFTs at the Cryptoverse Island gathering, which is a solid hint that there will be plenty of investment opportunities there.

The Sardinero Collection is a private collective initiative of digital art that has amassed more than five well-known artists and wants to conserve and promote a portion of the digital art being created in Spain from roughly 2021 to 2026.

The Sardinero Collection, which has its corporate headquarters in Santander and is made up of artists, critics, and technical staff, strives to be the best and largest collection of digital art in Spain by constantly expanding and improving.

A team of innovative architects known as Meta Building 4 Real (MB4R) is developing futuristic spaces for the metaverse, a new dimension of a computer-generated collection of 10,000 unique 3D models NFTs with proof of ownership stored on the Ethereum blockchain and ready for use in Decentraland and other virtual worlds.

On Cryptoverse Island, distinctive buildings that are all genuine works of art will be on display.

In the Installation category, Ariadna won a national award in her native Dominican Republic. She constantly reinvents herself by combining motion, agility, shapes, lines, and colour.

She has been active in the crypto community since 2021, providing the seasoned with new ideas and a breath of fresh air.

Sweden is where Anna Amgren resides and works. She has practised cryptography and digital art. She describes her paintings as “energy paintings” or “spiritual paintings.”

It indicates that she meditates before beginning and sets an aim for the artwork. Sometimes she paints while her eyes are closed, allowing her hand to naturally select the colour and move.

The magic happens when she imports the draught into the computer to work on various aspects of the painting; in the photographs, characters and symbols appear, all depending on your imagination; the more you look, the more you’ll find.

Anna takes pictures of natural details and uses them in the same way.

The Spanish-Argentinean is a resident of Madrid and has twenty years or more of communication experience.

On significant national and international projects, Diego has worked for some of the most prestigious customers in Spain.

He declares, “I was fortunate enough to win worldwide advertising honours, and my work has appeared in several of the most significant advertising media. Right now, my biggest struggles are still in the areas of photography and art.”

At just 3 years old, he started dancing, and at age 6, he took part in his first flamenco festival. Since then, he has created a route that has allowed him to perform in venues like Carnegie Hall while touring more than 25 countries across 4 continents.

He loves to think of himself as a disruptive artist who takes flamenco to new venues. He attempts to convey his perspective on flamenco in his collections of digital art.

In Spain and Latin America, Morales has won numerous distinguished awards and accolades. He still produces shows and travels the world with his company.

For the past 22 years, Amanda Lynn Veasey has occasionally created art. Due to Grave’s disease and Lyme illness, she began taking her work more seriously six years ago.

Her physical and emotional recovery were aided by art. It gave her a goal and something uplifting to concentrate on. She wants to utilise art, particularly NFTs, to eradicate greed, spread joy, and save the planet. She redefines texture, colour, and detail and appreciates evolution and iteration art.

For her, the adventure is what counts, not the destination.

Filmmaker, artist, and polymath Benedict Hadley resides in Brooklyn, New York. His work has been exhibited all over the world, particularly at the Cannes Film Festival and New York Fashion Week.

He has collaborated with several people, including June Ambrose, Francis Ford Coppola, Jay-Z, and PBS. His work is colourful, emotional, intricate, and profoundly spiritual.

He investigates inner-city African American children to strengthen their position in the neighbourhood and their immediate surroundings.

The abstract division in his art style, specifically in blending colours and geometric patterns or using patterns from nature, is the main focus of his work. In college, he majored in drama and performance arts, and at the University of Sheffield Hallam in the UK, he studied computer science.

He’s constantly looking for new software for artists. He kept playing with with colour, movement (such as animation), lines, patterns, noises, or even a mix of any of these. He is drawn to quantum physics and the fascinating, perplexing ideas it contains.

Using Blockchain, AI, and IoT while respecting the human as the centre of the internet, WISeKey is a leading worldwide cybersecurity firm that is actively deploying large-scale digital identity ecosystems for people and objects.

Today’s Internet of Everything is being shaped by ubiquitous computing, which is secured using WISeKey microprocessors. Almost all IoT sectors have more than 1.5 billion microchips installed by WISeKey IoT, including:

WISeKey is ideally situated to be at the cutting edge of IoT since their chips generate enormous amounts of Big Data. These, when examined with Artificial Intelligence (AI), can assist industrial applications in foreseeing equipment failure before it occurs.

Their solution, which is supported by OISTE/WISeKey, offers secure authentication and identity for the Internet of Things, blockchain, and artificial intelligence. This is both in real-world and virtual contexts. As a shared trust anchor, the WISeKey RoT preserves the integrity of online transactions. This occurs between objects and between things and people.

A complete market place is WISe.ART. It can link all participants in the arts sector. In addition to an authenticated and signed copy of the real digital asset, their white-labelling choices and unique NFT designs make sure that ownership evidence, provenance, and a set of smart contracts outlining future use and revenue streams are all provided.

The WISe.ART NFT platform is completely protected by WISeKey’s cutting-edge security solutions. These allow for the authentication of digital assets in a secure end-to-end procedure based on our experience and established knowledge in this field.