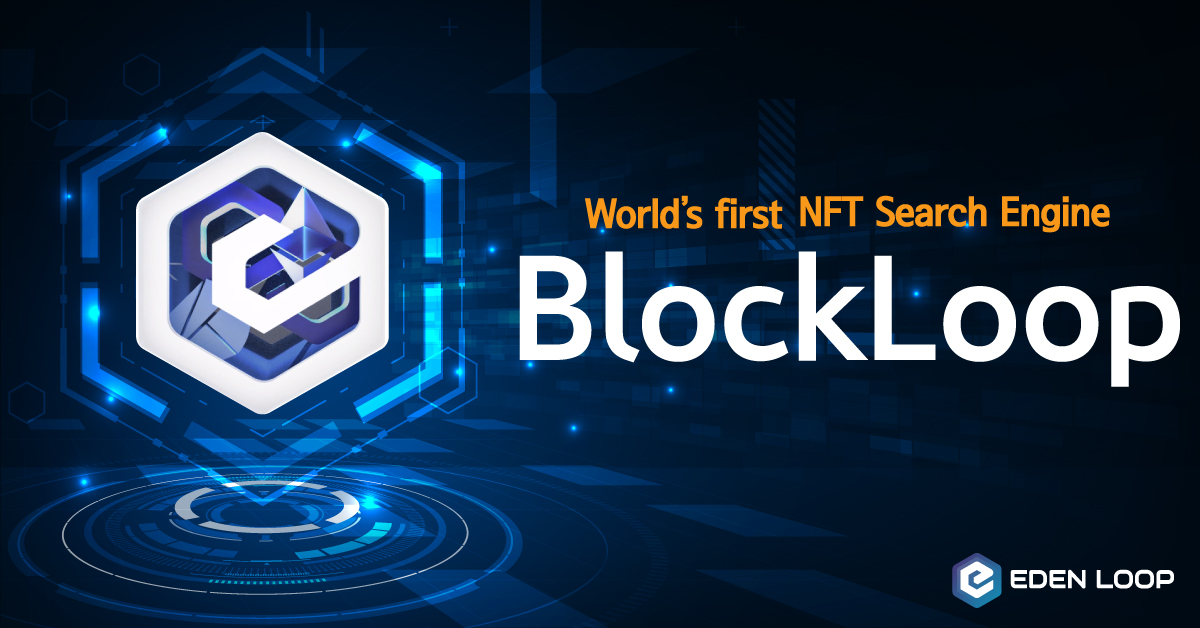 EdenLoop, a Korean company has been making big moves in the NFT industry, looking to truly revolutionize the space. by making the world’s first-ever NFT search engine. The aim is to take away the centralization aspect of existing NFT platforms and decentralize it fully. How would that happen, you may ask? Well, for that, we’ll need to know more about BlockLoop, a technology that the company has just released. Keep reading for more!

Currently, there’s not much different going on in the NFT market. There are countless NFT marketplaces that like to claim that they’re the leading option out of the bunch. However, they all pretty much follow a similar operating model. They’re just centralized NFT depots where anyone can upload anything and sell as an NFT. You can’t really know what’s happening with the rest of the NFT worlds, or truly connect all the NFT marketplaces together.

All this creates an opaque wall of one-directional e-commerce, where one party uploads a good, and the other party buys it. You can’t compare NFTs across the board, search for them all over the internet, and see which ones people are more interested in. BlockLoop attempts to fix all that with its unique take on the NFT industry’s shortcomings.

BlockLoop itself is an NFT search engine that has just been released by EdenLoop. The technology consists of various modules and operational parts that work cohesively together. At its core, BlockLoop allows users to search for NFTs all over the internet across various marketplaces. You can search for an NFT on Polygon, Immutable X, or OpenSea – all from the same place.

This sort of approach provides a significant amount of transparency for the NFT users. Let’s say you want to search for a specific NFT project. Instead of going to its website, and searching for the marketplace it’s uploaded on, you can simply find it via BlockLoop. Moreover, you’ll also find other related NFT projects depending on their rankings and relevance.

How Does it Work?!

EdenLoop itself likes to compare the BlockLoop NFT search engine technology to Google’s crawlers. If you’re not familiar with them, the Google crawlers are basically data-collecting algorithms that visit millions of websites daily. They come back with various datasets and figures that serve as important anchors for analysis purposes. The BlockLoop does the same thing, but instead with NFT collections on different marketplaces.

It collects heaps of data from these sites and pages, and then ranks the most relevant collections on its server. This translates to a visible ranking on the BlockLoop search engine depending on what the user searches. It also helps the algorithm to match perfectly the NFT collection with what the user has searched for.

Moreover, the service also uses SEO optimization, including specific keywords and phrases to, again, match the user’s request. The better an NFT’s keywords match the user’s search query, the higher it will rank on the results page. This way, the user gets the information they require, and the NFT gets more reach as well. A true win-win situation for all parties involved.

There’s only one underlying issue with such a technology in play. Since the platform attempts to showcase almost all NFTs on the internet, it will have plenty of trouble with copyrighting and data manipulation. However, the solution for that came before BlockLoop was even made.

EdenLoop is primarily known for its IP security, and the management of digital artists’ copyrights. Hence, they now have another excuse to use their pre-existing technology on a much bigger scale.

What’s to come for the future for EdenLoop? Well, the company has it written on their Medium page:

EdenLoop’s Web 3.0 BlockLoop technology is expected to establish a more complete NFT ecosystem, as a truly decentralized NFT marketplace that is different from the existing NFT open-designed marketplaces. After the (EdenLoop) ecosystem is constructed through the NFT search engine, it will evolve into a M-COMMERCE platform to provide a next level service. We will restrain the monopoly of NFT markets, pioneering a more transparent and brand new market.

EdenLoop comprises some top individuals with experience in big-shot companies. The NFT-centered project is not looking to mess around, as its core concept has been derived by an ex Vice-CEO of Samsung. EdenLoop looks to completely change the way we perceive NFTs, providing a transparent solution for the tech.

Even with the vastly changing and innovating field of NFTs and Web3 in general, EdenLoop is going a step ahead of the mix with its NFT search engine. Moreover, thanks to their IP security and reinforcement, along with multiple IP gateways set, they can also solidify their concepts safely.

🛒🚀Based on M-COMMERCE, the Eden Loop platform system is established to protect intellectual property (IP) and furthermore, plans are established and implemented to link with the real economy and other metaverse services, raising expectations for performance.🚀🔥#EdenLoop #NFT pic.twitter.com/TqxwJyLuLa

Another big project they’re attempting to work on is M-commerce. You already know what commerce is, and recently the boom of E-commerce has also taken over the world. But, what is M-commerce though? Well, it could be the future of retail shopping with the way NFTs and metaverses are taking over the world.

M-commerce will be the bridge between the purchase of NFTs and real-world commodities. The concept at its core means that whatever a user purchases an NFT of, they’ll get access to the exact same thing in real life. So, if Nike decides to release their own NFT collection of rare sneakers – you could get them in real life just by purchasing an NFT of them. Basically, the NFTs here will act like a ticket for you to get access to the real object, but also as a digital asset to showcase to the world.