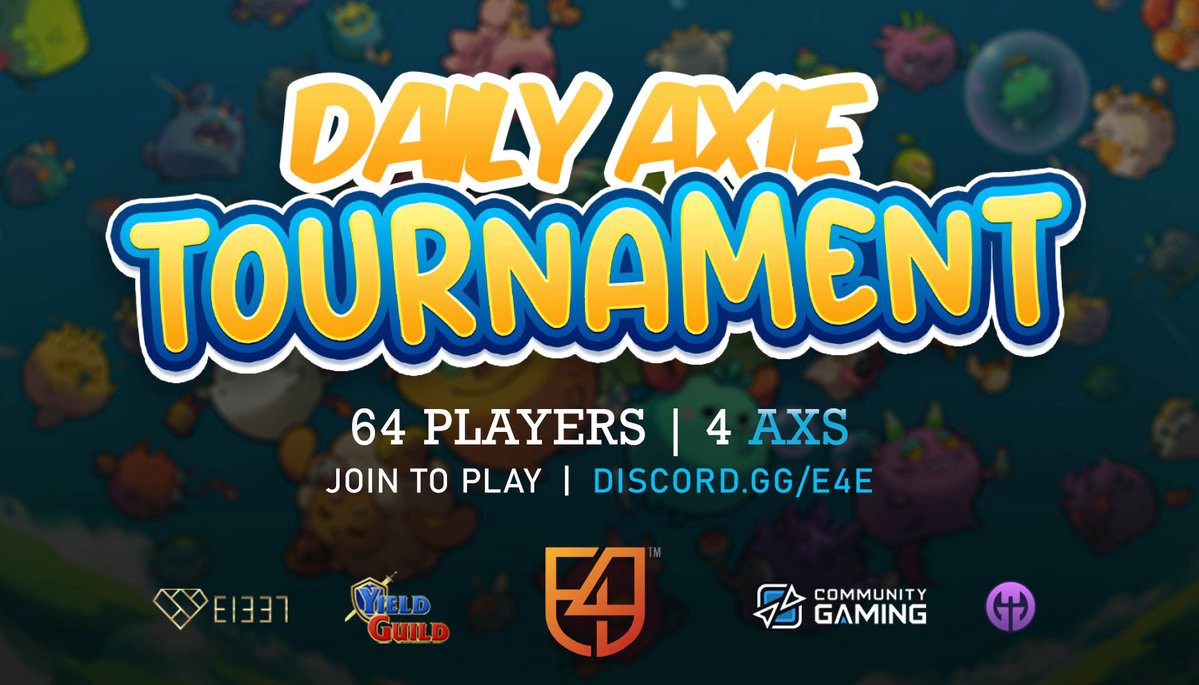 As part of the Axie eSports grant, Esports 4 Everyone has announced new events in the Axie Origins space. According to the eSports platform, the daily and monthly events are “new and improved.” Not only that, but more players will also be able to gain access to the game – which means more rewards.

Notably, Esports 4 Everyone is a leading organizer of eSports across the web3 space. It was established in 2021 in Vietnam, after which it opened its arms to all players in all categories. Furthermore, the popular eSports platform offers tournaments which are free-to-join, with amazing crypto prizes attached.

Additionally, the platform has been up and doing concerning its Daily Axie Infinity tournaments. In that regard, it has stepped up its game by tapping into the grant to give more experiences to its users. Axie Infinity released the update regarding its latest Axie eSports grant in September, featuring a total fund of $2 million.

We are proud to announce that our Daily & Monthly #AxieOrigins Tournaments are now being supported by the @EsportsAxie Grant Program! 🤝

Read about our new and improved Origins tournaments, and learn how to get involved here 🤓👇https://t.co/1Va1dzKm4k 📚#Axie #Web3 #eSports pic.twitter.com/pTmwABnRNC

Esports 4 Everyone claimed that its new tournament events are new and improved with special perks attached. Thanks to the Axie eSports grant 3, which featured a fund pool of 160,000 AXS, the platform has increased its daily and monthly rewards. For the sake of curiosity, 160,000 AXS is equivalent to two million United States dollars.

The eSports-oriented platform has increased the acceptable number of participants for daily tournaments. Rather than the usual 32 players, the tournament will now accommodate a total of 64 players. With this, Esports 4 Everyone hopes that more players can get immersed in the awesome experience.

Also, the game will still maintain its original takeoff plan – which is a Single Elimination, Naked format. This means that throughout the game, no runes and charms will be used. Not only that, but the games will also maintain the usual style of 3 matches per round plus 5 minutes breaks.

As mentioned earlier, the daily tournaments will be open to everyone. This is in line with E4E’s focus, which is to organize and host free-to-join tournaments across all eSports. As such, the daily Axie tournaments are free for all players to join.

Moving on, Esports 4 Everyone stated that 64 players will compete in the daily Axie Origins events. The game will remain as a Single Elimination, Naked game where no runes and charms are allowed. However, the daily Axie tournaments will feature an unlimited Axie pool.

By hitting the top spots in the daily tournaments’ leaderboard, players can increase their chances of playing in the monthly finals. Succinctly, the daily events will be streamed on the platform’s Twitch channel. But there will be no casters at the events.

Compared to their daily counterparts, the Axie Origins monthly tournaments are bigger and better. Thanks to the eSports grant program, the reward pool for the monthly events has also been expanded. While that is great news, it has its own perks too.

Like the former, the Axie Origins monthly tournaments organized by E4E will now feature 64 players. These players will be chosen randomly and on invitation bases only. However, players can increase their chances by hitting the top spots on the leaderboard.

Furthermore, the spots on the leaderboard will be finalized on the last daily event of the month. After that, E4E will invite the top 64 players for the final showdown and the chance to win big. Upon invitation, games will be played on the eSport server, where runes and charms are unlocked, but mystics are banned.

The Axie Infinity Origins monthly finals will accommodate the selected top 64 players. And they will participate by invitation only. The monthlies will be streamed live on the platform’s Twitch channel and “in a second language on another streamer’s channel.”

Also, the monthly finals will remain in their usual Single Elimination format. However, runes and charms are unlocked here. They will be available on the eSports server, capped at Epic.

Similarly, no mystics are allowed during the course of the event. Nevertheless, players are sure to enjoy the experience at the finals. Additionally, there are 10 Axie pools compared to the daily tournaments.

To ensure the seamless flow of events in the tournaments, E4E has released a few guidelines. These will inform players about what to expect and what not to. Also, it covers information regarding network issues and exclusive rights.

● Double Checking: E4E emphasized on the need for players to double-check their check-in statuses. This way, they will be sure that everything is set and they are good to go.

● Network Issues: While network, disconnection, or technical issues are expected, players will be the judge in such matters. However, the proof is required before decisions can be made. Even with that, the winner is free to choose whether to replay or not.

● Moderator’s Decision: This is necessary in a situation where a remake happens, but there is a mutual dispute. A mutual dispute is one in which there is no clear winner between the players. Should such occur, the moderator’s decision will stand.

● Positive Vibes All the Way: The Axie Infinity Origins daily and monthly tournaments are organized to bring the web3 gaming community closer. As such, players are expected to keep up the positive energy. There must be no offensive or foul language during the events to avoid being banned from all E4E events.

● E4E Exclusive Rights: The organizers of the Esports 4 Everyone events are at liberty to disqualify any player that does not act well. For instance, if a player is found making derogatory remarks about another player, he can be disqualified. Hence, players should maintain healthy competition and sportsmanship.

● Starter Axie Bonuses: According to Esports 4 Everyone, Starter Axies are allowed. In fact, the platform will reward the first player for winning a tournament with Starter Axies only. While the reward is undisclosed, it is said to be a special one.

As announced, there are attractive rewards attached to both daily tournaments and monthly finals. For the dailies, the prize pool is 4 AXS. This is equivalent to making $100 every day.

Additionally, the monthly finals will feature a prize pool of $3,000 worth of AXS. Also, should a player grab a place in the top 16 spots of daily events, he will earn QP points. To sign up for the tournaments, players should visit Community Gaming and E4E’s Discord channel.