FC Barcelona Releases Its First NFT Based on Cruyff! 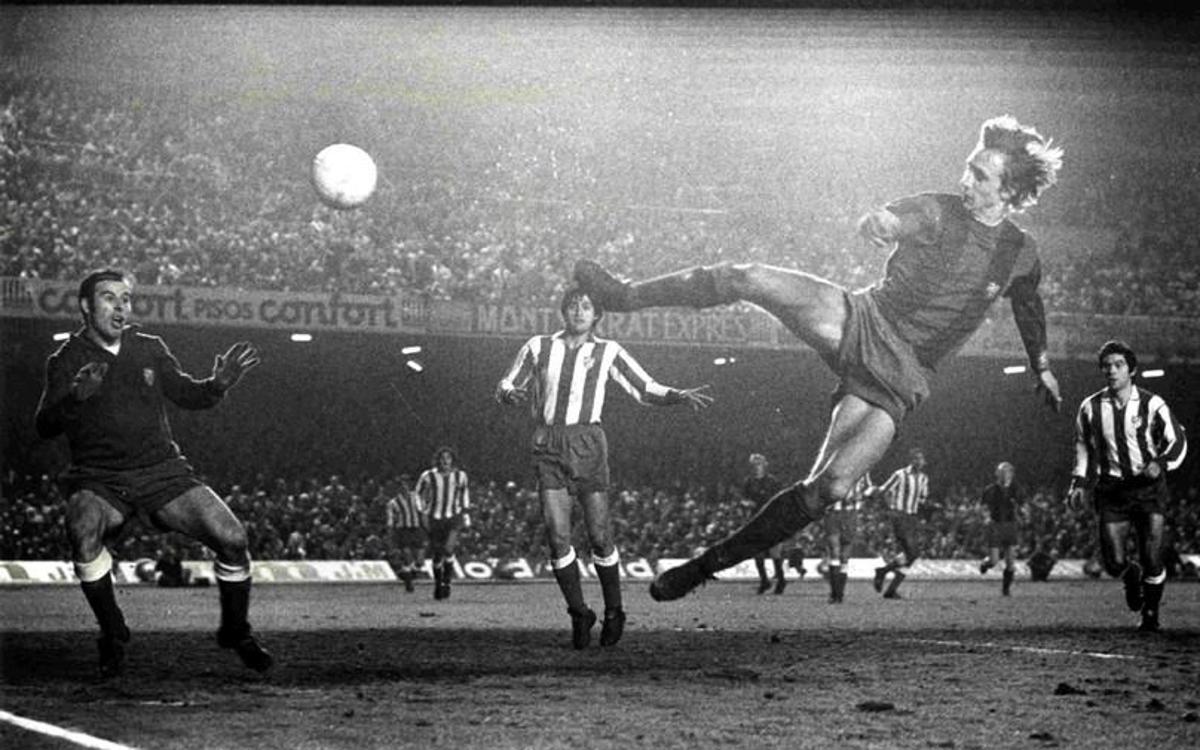 In recent NFT news, there’s a big bomb dropping for football fans. FC Barcelona, one of the biggest clubs in the world, has released its first NFT collection, with the auction having left the runway. The live auction will be held at Sotheby’s in New York on the 29th of July. The auction is going to be a hybrid one, where even online users will be able to participate if they can’t make it to the Big Apple. Let’s dig a bit deeper about the NFT piece itself!

The NFT is being called, “In a Way, Immortal“. It’s a collection of 5 total assets, but it’s technically derived from one, beautiful 47-second long animation. The collection features the video, along with 4 other still shots taken from the video itself. The 1-of-1 NFT collection is based on the legendary footballer Johan Cruyff, who’s seen as an immortal figure for the Spanish football club. Being one of the best NFT pieces out there, it only seemed fitting to dedicate it to a player like Cruyff.

The entire animation attempts to recreate one of the most iconic moments in the La Masia Club’s history. Cruyff scored an almost impossible goal against Atletico Madrid, another Spanish club, in the year 1973, embedding the moment in Barcelona’s history for eternity. To cherish that very memory, this NFT will go to one lucky bidder out of the auction. The entire collection was crafted with the help of World of Cruyff, an organization that pays tribute to the player.

This is how Barcelona describes the moment:

Johan Cruyff’s “Impossible Goal” against Atletico Madrid in 1973 is forever revered as one of the greatest moments in FC Barcelona history.

You can tell that this very instance is a significant one for not just the club, but also for the fans as well.

The main purpose of this piece though is to create a strong connection between the club and its fans. Whoever does receive the “In a Way, Immortal” NFT piece, will be entitled to numerous club benefits for FC Barcelona. The marketing by the club is also oriented in a way to express a close bond between the NFT-owner and the club.

In the promotional video by FC Barcelona, this is what’s said:

Welcome, we’ve been expecting you.

This is shortly followed by a shot of a grand door with the iconic FC Barcelona emblem on it. Clearly hinting at the fact that the door to the Barca World will open for whoever wins the NFT.

In a way, it also creates an even more intense bidding war between the fans, as everyone will do whatever it takes to acquire the 1-of-1 piece. When money isn’t an issue, who wouldn’t want exclusive benefits to their dream football club?

Perhaps the biggest reason to buy the NFT piece for a Barca fan would be the VIP benefits that come along with it. The club will make the holder of the NFT the official Barca Digital Ambassador.

This title will come with its own grand list of benefits and exclusivity. For starters, the holder will have access to Meet and Greets with players and other iconic club members. Moreover, they’ll also have rights to play at Camp Nou itself, Barca’s official stadium for those who aren’t football fans. The club will also arrange visits to the club academy as well, which is known for talents like Lionel Messi, Andres Iniesta, and Pep Guardiola.

A Piece of Art

With the recent passing of Cruyff, it was vital to make something that is perfect down to each inch. And, that’s exactly what the club has done. With a super team comprising of various Hollywood-based directors and artists, the work of art took a whopping 10,000 hours to complete. On Sotheby’s official page for the auction, you’ll see a gracefully fitting description of each of the four still shots in the collection.

The Late Johan’s son, Jordi Cruyff, also had a few words to say about the mesmerizing NFT collection:

‘’The NFT “In a Way, Immortal” will be forever linked to my father’s legacy. He would have been fascinated to see that one of his most beautiful goals with FC Barcelona has been the inspiration to create this unique piece of digital art that we hope will be enjoyed, admired and remembered forever.”

Increasing Involvement of NFTs in Sports!

It isn’t a surprise to see sports catching up with the rest of the world in the NFT space. As a matter of fact, this Barca NFT isn’t even the first in the footballing world. Man City has shown their involvement in the web3 space a long while ago in fact. The English football club based in Manchester even has a virtual stadium in a metaverse. Apart from that, there are NFT cards that feature Man City players, with iconic moments on the back of each card.

Furthermore, there are other major NFT collections in the sports industry. The NBA has its own collection, called The Association. It also features player NFT cards, but they change dynamically based on team performance.

Having said all this, it also makes sense to have NFTs involved in sports. There aren’t many fields that have a loyal fanbase as sports teams do. Even with the FC Barcelona collection, fans will go head-over-heels to acquire the NFT collection. You’d rarely find that elsewhere. Nonetheless, it’s great to see the reach of NFTs extending to realms we didn’t expect before. Moving ahead!