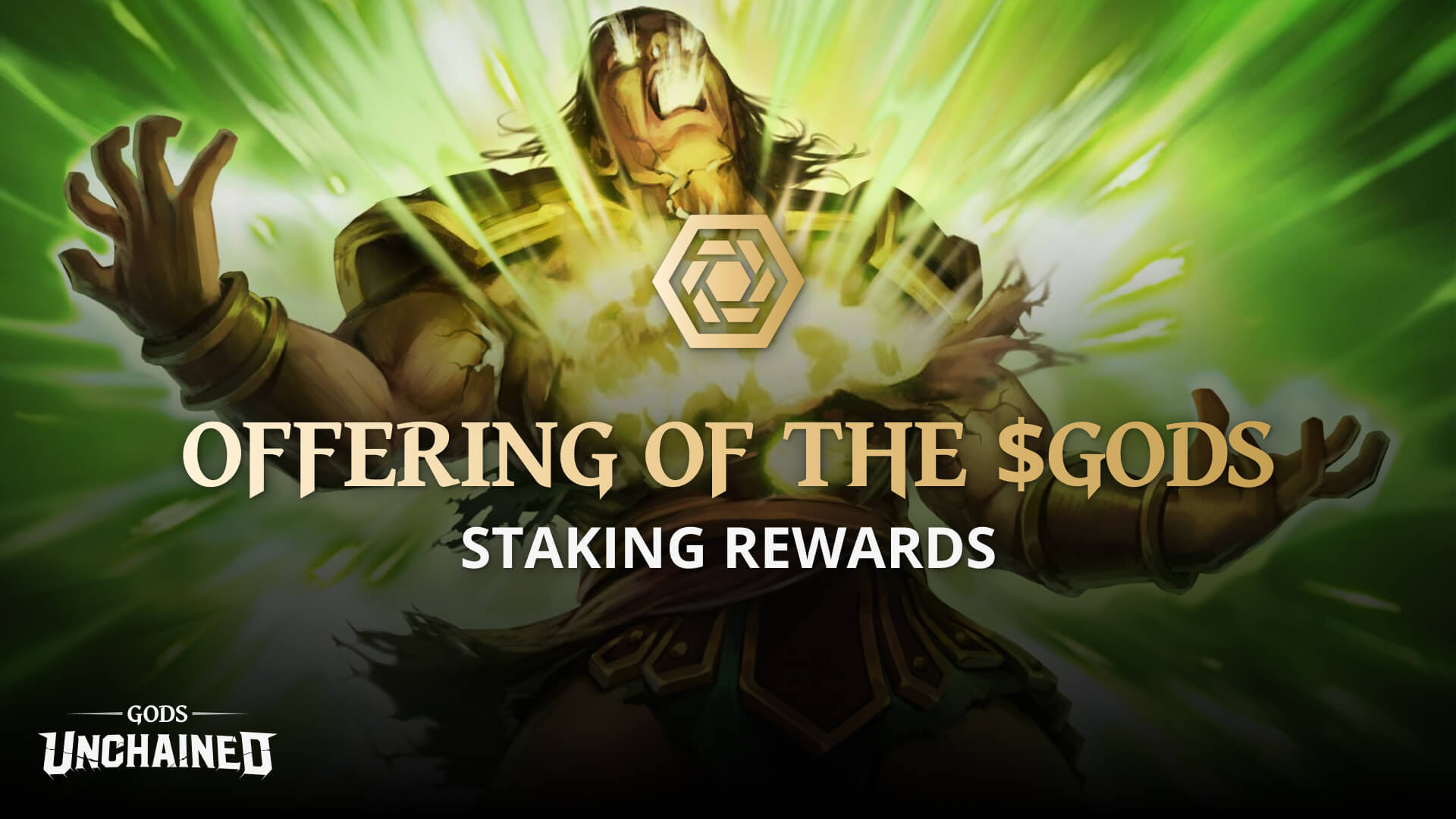 Gods Unchained has announced its August offering rewards are now available for players to claim. “Mortals” can collect $𝐆𝐎𝐃𝐒 staking rewards by competing in the play to earn (P2E) token event, Weekend Ranked, with a total reward pool of up to 35,000,000 tokens.

Previous events have seen players earn 21,023,997.95  tokens, and only those who have fought to the top of the Weekend Ranked leaderboards will be able to claim tokens.

The Team at Gods Unchained aim to be the best Web3 game that reimagines traditional game design, tests new frontiers of the game economy and paves the way for new gaming mechanisms made possible by blockchain technology.

Each week if mortals hold $GODS tokens on the Immutable X platform, they are eligible for rewards.

ICYMI:
👉Hold $GODS on IMX
👉Link IMX to GU
+
👉Play 1 ranked game OR
👉Forge OR
👉Purchase packs OR
👉Trade any GU NFT on the IMX platform (any marketplace)
🔮https://t.co/gViScM75ty pic.twitter.com/vNovs9eW2U

$GODS currency is the native ERC-20 token of the Gods Unchained universe, and Mortals can use it to create NFTs, purchase packs from the Gods Unchained marketplace and additional rewards. These tokens also represent voting power, enabling players to participate in governance proposals influencing the game’s destiny.

Token holders participating in governance initiatives while actively staking can earn rewards from the poll in $GODS tokens. Through gameplay, tokens can also expand the Gods Unchained economy, which players can acquire by completing campaigns.

Players spend $GODS tokens to fuse game cards into NFT, which they can mint onto Immutable X. Cards are then tradable on Ethereum layer 2, giving gamers complete ownership over their digital assets.

$GODS gives players the power to vote on the future of Gods Unchained. The game developers believe players should contribute to the game’s future and be integral in setting the course as the NFT game expands.

The game calculates rewards each week that you meet the eligibility criteria. If you miss meeting the requirements in a given week, you only lose out on rewards for that specific week.

Players can control eligibility for the upcoming Rewards.

To be eligible, a player must:

Plus, one of the following criteria:

Each reward period will have a specific number of $GODS available in a pool, and each player receives a percentage of the $GODS in that pool relative to the size of their $GODS holdings for that period.

The ratio of P2E rewards is calculated based on the minimum amount of $GODS a player has held in that reward period as a portion of all the $GODS tokens held by eligible players in that same period.

Soon, the team are releasing an epilogue to Season 1: Champions Rise – the conclusion to the climax of the significant expansion release Mortal Judgement. They’re also experimenting with various Web3 launch tactics, such as capping the number of sales, limiting the number of mints, or making it a time-bound launch.

However, for now, we must wait and see.

Cosmetics will migrate from the current Ethereum L1 to Immutable L2. It’s a complex task and has taken developers time to deliver, as players have been enquiring when this move will come for some time. Gods Unchained should successfully migrate all Cosmetics by the end of this cycle. Once complete, it’ll be easier for the team to release more content and accessories (Chests, Trinkets, Boards, etc.) directly on Immutable X.

Developers are utilizing the new PTR for a balance update so that the team can receive, and act on, quality feedback. They’re evaluating using PTR much more, even for the regular patch or balance updates.