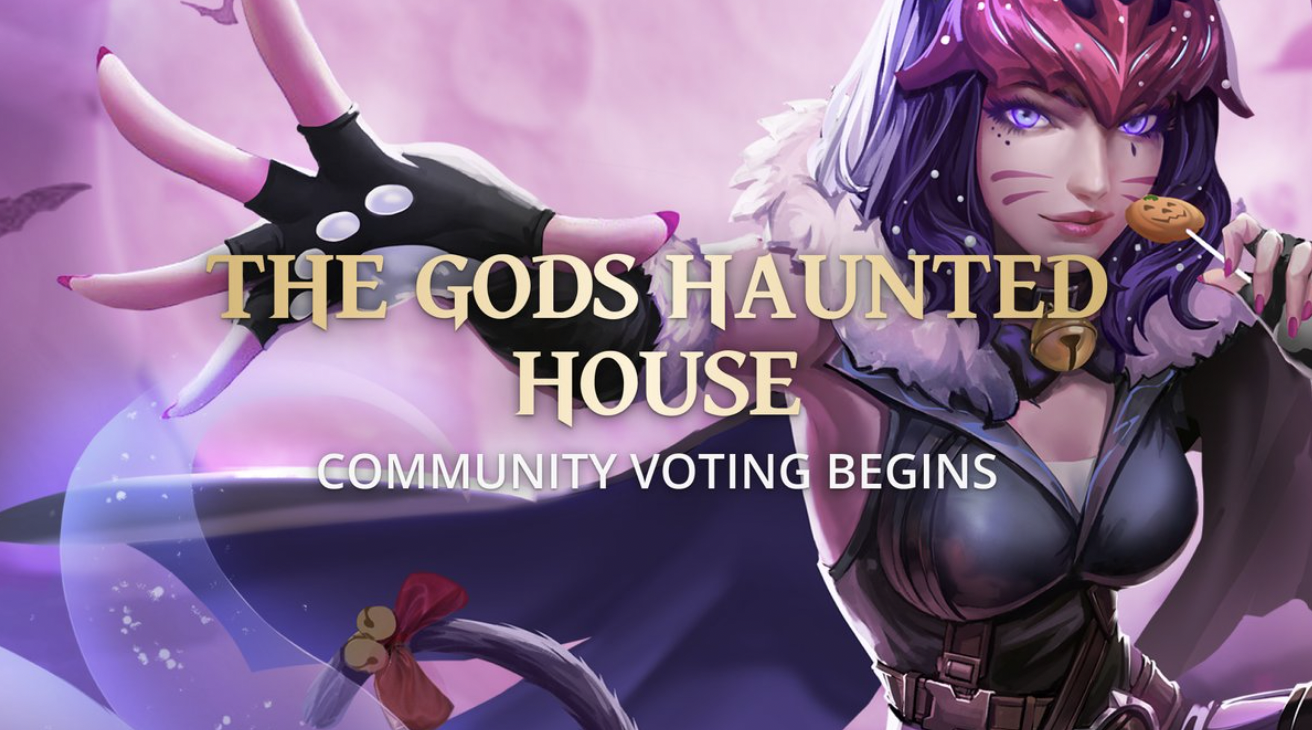 Today the official Gods Unchained Twitter account announced that the time has come for Community Voting to begin for users’ favorite ‘The Gods Haunted House’ submission.

The submissions are featured in the Gods Unchained Discord server in the art channel.

Don’t forget to vote quickly as winners will be announced by November 14th!

What is ‘The Gods Haunted House’ Submission?

The Gods Unchained team released a detailed Reddit post that outlined all the details for the Haunted House art submission content. Read on as we break down the key details.

You can participate, regardless of your level of creativity; you don’t need to be a professional artist to be eligible to win some of the 6000 $GODS the team is giving away.

What was the prompt?

The submission had to have a Halloween theme and contain a character or circumstance from the Gods Unchained cards or tales.

The characters from Gods Unchained are all relevant. The Gods or Champions are included in this. Whether it is Grim Reaper Elyrian or Cat Girl Ludia.

How did Users submit and what were the rules?

Users have to utilise the hashtag #SPOOKYGU on Twitter to share their works with the Gods Unchained crew by tagging @ GodsUnchained. You have to specify the category you’re submitting for, or the staff will decide how to arrange the submissions.

The following rules have to be followed in order to avoid disqualification:

The Gods Unchained team will evaluate each entry based on 33% ingenuity, 33% originality, and 33% visual appeal. Therefore, in order to produce Gods Unchained yet SPOOKY, developers had to use their most innovative Halloween concepts.

The community can now vote for winners on Discord using emotes in the #art channel after the Gods Unchained crew has narrowed the field of candidates down to 10 in each category.

What are the 3 Categories for ‘The Gods Haunted House’ Submission?

There are 3 categories in which you can vote for your favorite community-created artwork in the Discord server:

What are the prizes for ‘The Gods Haunted House’ Submissions?

The winners will be declared no later than November 14th.

How does the actual Gods Unchained team create their designs?

In an article on the Gods Unchained website, Christiaan Gerritsen, the art director, provides an inside look at the aesthetic method their painters employ to bring the playing cards to life. The amazing Yan Kyohara’s BeastFury Shaman drawing was showcased in the article.

Gerritsen describes how the design team painstakingly chooses which new cards should be introduced to the game before beginning to produce the art for Gods Unchained. The choice to add a new card is difficult since it needs to suit the existing set in a balanced and complementary fashion. Gerritsen starts creating the art after the game team completes the specifications for a new card.

The artist will proceed to draw and paint after obtaining the brief. Following that, there is a back-and-forth between the director and the artist. Gerritsen’s responsibility at this point is to offer feedback and counsel to make sure the artwork will express the desired message. After much back and forth, the artwork is finally completed.

Initially intended to be a spell, BeastFury Shaman evolved into a creature throughout the design phase. The brief Gerritsen gave Yan Kyohara was: “a druid warrior with a burning spectral green panther head snarling behind him. Green jungle background.”

Yan Kyohara explained his process even further: “When conceiving the Beastfury Shaman card, I tried to bring more personality to the common tropes around the theme. I did some sketches to explore the possible features of the character and ended up with a more easygoing, young, and funny kind of Shaman, which is my personal twist on the trope. It was a pleasure working on this card for Fuel Games!”