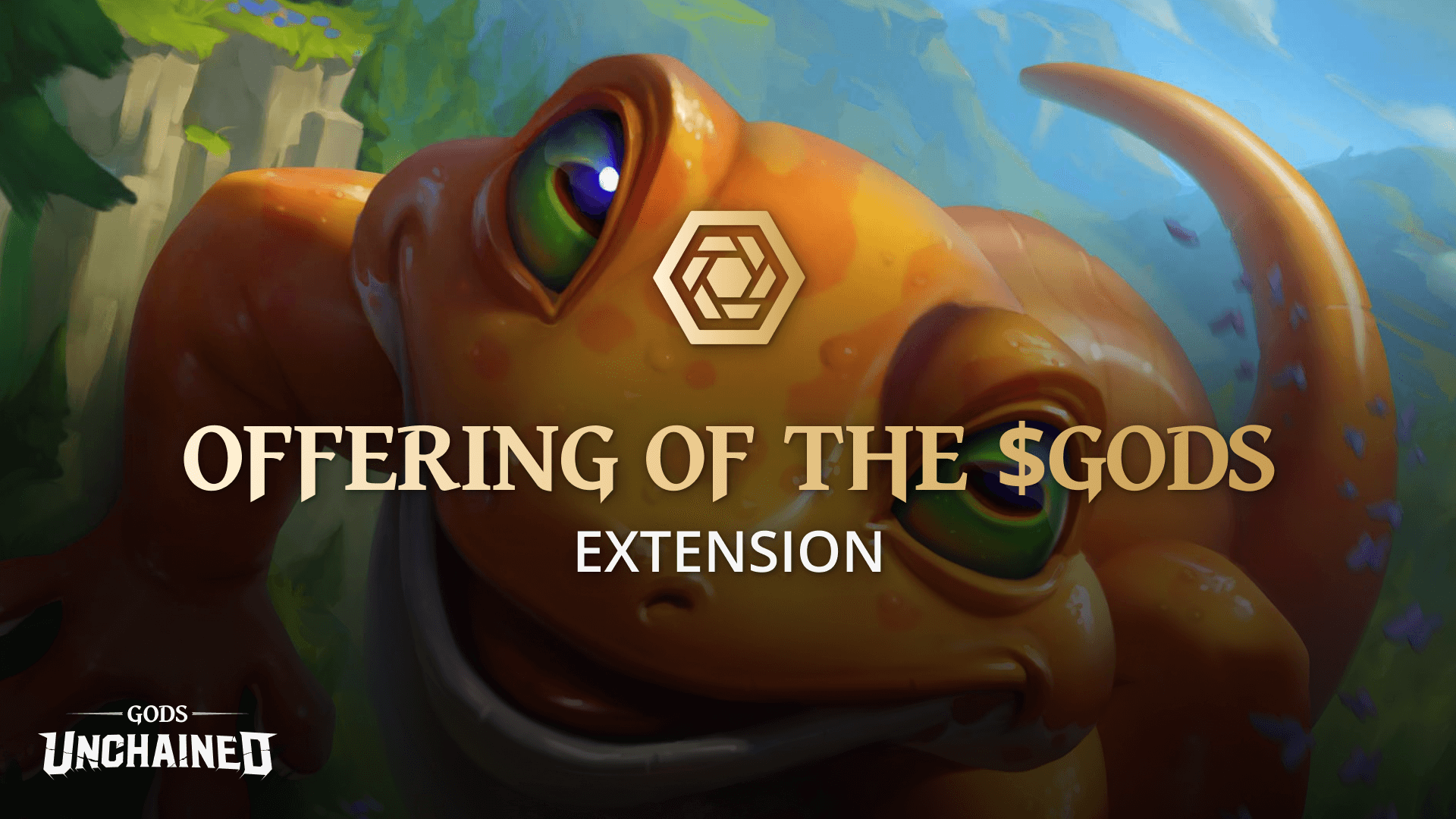 Gods Unchained extends its manual staking program again. The scheduled date moved from November 9, 2022, is now set to March 1, 2023. The P2E platform opted for this move in a bid to reward active members of the community. They intend to increase the number of participants receiving the $GODS tokens.

Sequel to its chain of success, the platform seeks to iterate its reward structures for the Offering of The $GODS. Players should obtain $GODS on IMX for the next four months to become eligible and claim rewards.

The manual staking program is being extended once again from 9th Nov 2022 – 1st Mar 2023✨
Why? Our priority – reward active members of the community & we'd like more participants to receive $GODS tokens
🧵👇 pic.twitter.com/BUhFcXmlBj

The staking program is a significant milestone in Gods Unchained’s history. It is a reward system for players that is both industry-leading and game-centric. The $GODS token gains greater utility by adding a staking mechanism like the Offering of the $GODS.

Players who participate in the wider Gods Unchained ecosystem get rewarded in proportion to the number of tokens they retain. This special approach uses tokens that aren’t truly present in conventional goods.

As a web3 game, Gods Unchained chooses to develop distinctive experiences for its community. This includes returning $GODS tokens to active players as an appreciation for their loyalty and active participation with the platform.

Players’ actions, including using the Forge and buying Expansion Packs, generate the prizes for Offering of the $GODS. When the developer’s incentives align with the community’s, the efforts to distribute value to the community remain practical.

It is crucial to note that rewards are broken up into weekly snapshots to process their calculation and understand eligibility. Calculations take place weekly for players that satisfy the eligibility process. Should a player fail to fulfil the eligibility criteria in a week, he will miss out on that week’s rewards.

This method ensures players get compensated for the times they hold onto their tokens. This includes times they chose to use them to purchase items in-game.

Rather than employ a strategy that captures community members who continuously retain their tokens, GU seeks to capture and reward. Rewards will still be given to players for all other weeks they satisfy the requirements.

There are two separate components to Offering of The $GODS: Surprise and Ongoing Rewards. Surprise rewards account for 33% of the total $GODS token. It spanned from December 1, 2021, to June 12, 2022. It took snapshots weekly and required players to claim rewards on the Gods Unchained website.

The Ongoing rewards account for 67% of the total $GODS token. It spans from June 13, 2022, till the end of the program and has a monthly delivery of snapshots batches. It takes snapshots weekly and requires players to claim rewards on the Gods Unchained website.

The criteria were applicable retrospectively for the Surprise Rewards. It allowed the distribution to consider players who satisfy the requirements and are considered Gods Unchained citizens. This is notwithstanding, even if players can regulate eligibility for the forthcoming Ongoing Rewards. In essence, Gods Unchained accurately captures what a GU player expects.

To obtain eligibility for rewards, a player must hold $GODS tokens in an IMX wallet. In addition, they should link their Immutable X wallet with Gods Unchained. Also, the Gods Unchained community should remember to play a role to qualify for eligibility. These roles include player, minter, purchaser or secondary market buyer/seller.

Calculating $GODS shares a similar technique to calculating rewards in Weekend Ranked. Each participant will receive a portion of the $GODS in the pool. This will be according to the size of their $GODS holdings for that reward period.

The bare minimum is what Gods Unchained uses in calculating. This is because it’s the most accurate indicator of how many tokens a player kept during the reward period. God Unchained does not use average holdings to calculate rewards. This is because it is unfair to reward wallets for storing significant amounts for brief periods.

The Staking Program: What Gods Unchained Seeks to Achieve

Gods Unchained intends to ensure its community feels appreciated and recognized for its dedication and commitment to the game. This is regardless of whether they as either ardent veterans or rookie players just starting to engage with the economy.

However, the P2E platform wants to refrain from disbursing tokens arbitrarily. It intends to provide systems that reward and encourage all its active players to hold a percentage of their $GODS. It seeks to ensure the community is confident in its decision to leave a positive mark on the game industry.

With The Offering of the $GODS, Gods Unchained hopes to encourage players to keep their $GODS tokens on Immutable X. In addition; it seeks to bring tokens from the Ethereum network back to Immutable X.

As more tokens get retained, the benefit to the game’s economy is higher. This initiative compensates devoted players proportionally based on how much of the held $GODS supply they hold on to.

Gods Unchained will strike a good balance with this. Players will choose where they get the most value from their $GODS tokens. This could be through utilizing them to enhance their collection, playing Gods Unchained more, or keeping them while playing.

Gods Unchained is by far a contender for one of the most popular P2E web3 games in the market currently. The NFT-based card strategy game is built on the Immutable network.

Gods Unchained is a free-to-play tactical card game allowing players to own their in-game items. Players strategically outsmart their opponents by constructing decks that can counteract several approaches in the competitive play the game emphasizes.

The game’s native GODS token is a payment method through which players can earn. Due to their ability to be sold for GODS and conversion into fiat money, rare cards have an exceptional worth.

Along with other NFT and cryptocurrency-based games that play-to-earn, the game is rapidly gaining popularity. The game debuted in 2018 when it made it sold its first mythic card. Since then, $80 million worth of cards have been sold, and $15 million in Series A investment has been raised.

Gods Unchained developed from a simple concept to a fully functional NFT game with a substantial user community. It achieved this feat in less than four years. On its Discord channel, the game has so far been able to draw in about 84,000 users. Comparatively speaking to other blockchain-based NFT games, this is a sizable amount. Gods Unchained has a bit over 100,000 followers on Twitter.

However, social media reach and engagement are only a minor component of what makes a project successful. The number of users actively playing P2E games is the ideal litmus test. Gods Unchained also performs admirably on this metric.

However, NFT sales have greatly increased. According to CryptoSlam research, the total NFT sales for Gods Unchained assets topped $16 million in October. In the game’s history, this month saw the biggest monthly sales.

The statistics from CryptoSlam also reveal that lifetime NFT sales have topped $82 million. Also noteworthy is the fact that the game’s debut season just ended.