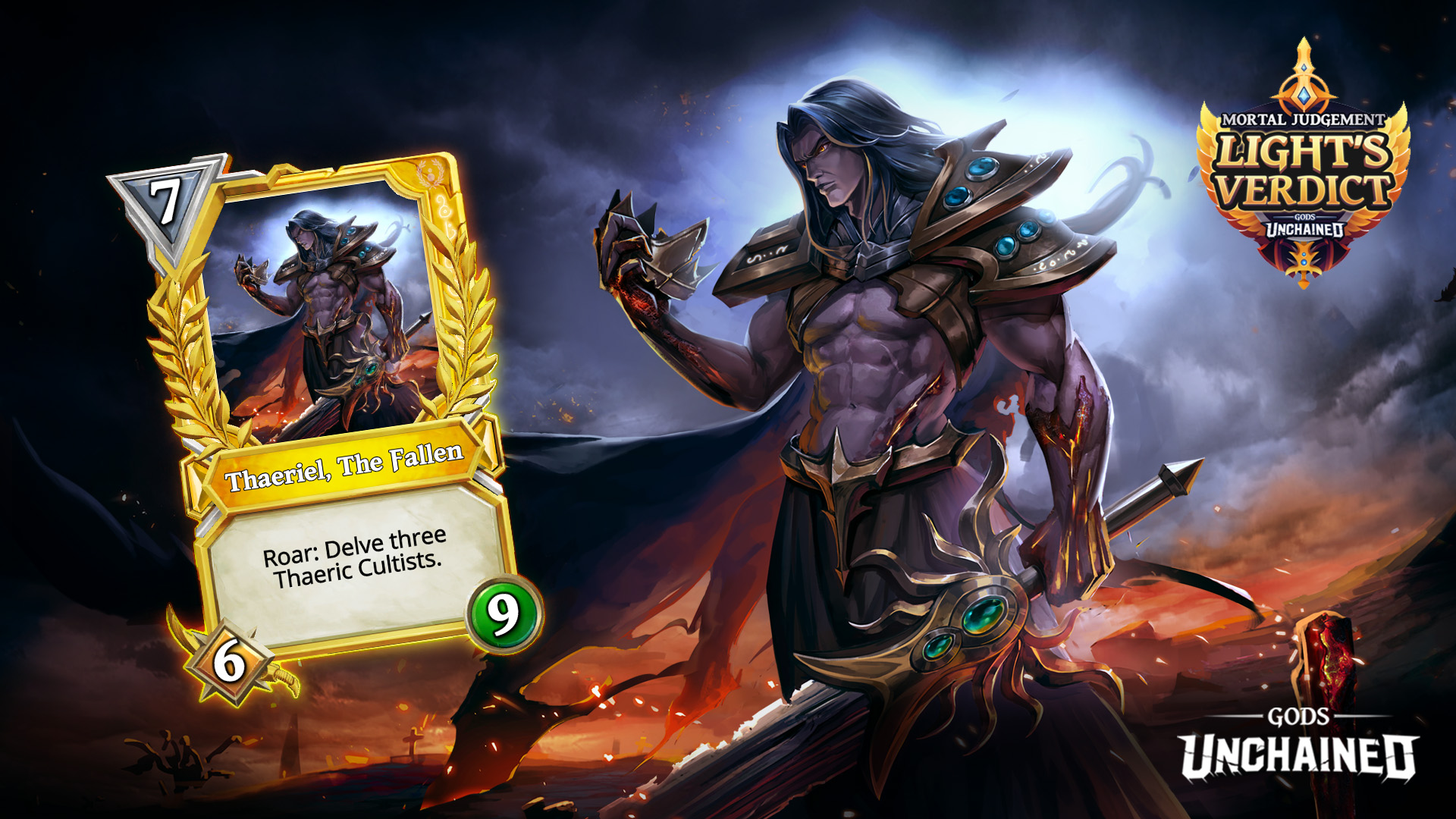 The final three Gods Unchained Light’s Verdict cards are here and we have all the details!

Light’s Verdict is an Epilogue Expansion Set that ties up all the major plot points of several Gods Unchained characters in Season 1 while setting up the stage for Season 2.

There are twelve new cards in this limited edition set. Six of the cards conclude the stories introduced in Mortal Judgement and three of the cards constitute powerful Creature cards with highly valuable in-game utility. They will be compatible with any deck because they are neutral.

The remaining three cards will reveal a story to advance the story’s plot. The three cards depict the fall of Thaeriel, the God of Light, and the ascension of Champion Lysander as the next God of Light.

A video shared on the expansion set’s page depicts an overview of the journey so far.

The set will be going live on September 28, and the twelve cards will only be available for a limited release window of 14 days here.

This will be the final expansion card release for Season 2 of Gods Unchained, so if you want to get hold of the deck, make sure you do so in the two-week period.

For an exclusive sneak peek and overview of the final three cards in the Light’s Verdict set, see below!

The first card in the final trio is the Martyr of Whiteplain.

The Martyr of Whiteplain is a creature card of epic rarity. It’s also neutral, so it can be used in any pack.

If you have this card in your void, you can summon this creature after a friendly creature dies.

The lore behind this beautiful card tells of sacrifice for one’s homeland. It refers to the Battle of Whiteplain where soldiers and commoners fight together to hold off the invaders.

The Martyrs offer hope in the darkness. They stand defiant and find ways to push on so their people can survive.

The second card in the set depicts Thaeriel, the Fallen. Thaeriel is a fallen god forced to roam Eucos as a mortal. His scars remind him of the light that was taken away from him.

A big part of the lore explored in Season 1 centres around Thaerial the Fallen’s story.

And the third card in the set is another Neutral card of Epic rarity. It’s a creature card depicting the Blade of Whiteplain.

It allows players to draw a card once per turn as long as a weaker enemy creature is destroyed.

What can we expect from the Gods Unchained Light’s Verdict deck as a whole?

There will be 12 cards in the Light’s Verdict deck, of which four will be legendary and eight will be epic in terms of rarity.

Most of these cards were revealed over the last couple of weeks by Gods Unchained partners and members of the team.

The twelve cards are as follows:

There will be additional perks for those who purchase a set of Light’s Verdict cards. For instance, they’ll have a much better chance of grabbing the mythic Omox, the Mad card.

Our sources say there’ll be a 20x drop rate increase for Omox, the Mad.

Omox, The Mad is a neutral mythic creature card that allows players to obliterate their hand and replace it with nine random 9 mana creatures and set their cost to 1.

Also, there’ll be an exclusive collector’s reward available. Collectors will be able to grab a Lysander’s Spear Trinket. Players can shine fuse their Light’s Verdicts card to upgrade.

We asked Chris Clay, VP and game director of Gods Unchained, what he thought the biggest successes were for the team in this past season. Chris told us that the main highlights included the release of $GODS, the game’s migration to L2 on Immutable X, the launch of Daily Play & Earn last month, and the new GameStop Pro partnership that was announced recently.

Chris said: “So much has happened throughout the development of Gods Unchained during Season 1. Immutable started by launching the first multiplayer game on the blockchain back in 2017.

“Since then, we have been obsessed with redefining the gaming industry by bringing digital asset ownership to all players.

“We believe that games should give back to the community, and this is why we have created a model where players can earn value, utility and ownership from engaging with and supporting our games.”

Speaking about the recent GameStop Pro partnership, Chris told Play to Earn Diary: “As someone who grew up being dropped off at game stores while my mom went shopping, it’s exciting to be able to partner up with Gamestop in onboarding millions of players into the world of true digital ownership in games.”

We asked Chris what Gods Unchained’s fans can expect from the game in Season 2. He said:

Well, we had to try!

Still, though Chris remained tight-lipped about specifics, it’s exciting to hear that we’ll find out more about the fascinating lore behind Gods Unchained.

And if the gorgeous artwork and intricate backstory surrounding the last three cards in the Light’s Verdict pack is any indication, there’ll be lots to look forward to in the new season too!