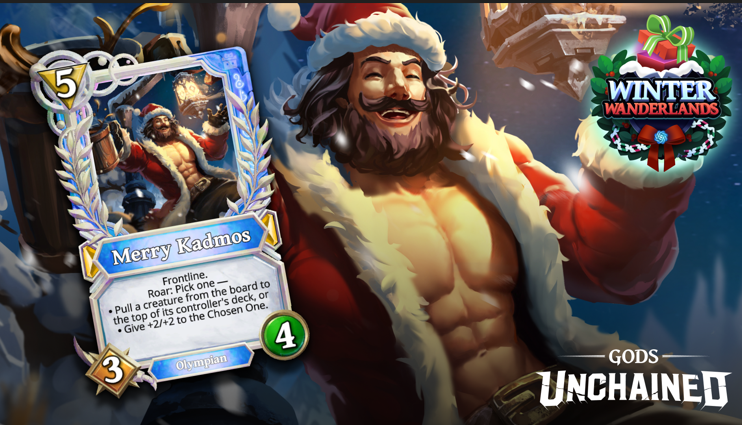 Gods Unchained, the blockchain-based gaming giant, has just announced their first seasonal-themed card set, Winter Wanderlands. As the first set of its kind in Gods Unchained’s history, it will bring something special for all gamers – from passionate collectors to passionate PvP competitors who love Gods Unchained’s fast-paced and strategic gameplay.

Designed to embrace the spirit of the upcoming holiday season and invoke a special festive flavor with unique assets and cosmetics, Gods Unchained’s Winter Wanderlands set is sure to liven up game sessions in style.

“The new set will be a truly special edition, and we wholeheartedly invite the Gods Unchained community to join us as this festive story unfolds, and bear witness to this unique narrative that — for the first-time ever — places the champions in a different world outside of Eucos.”

The set will go on sale on December 14 for a limited time only. Sales will end on January 11, 2023, so if you’re interested in this festive card set, make sure to get your hands on it while stock lasts!

What’s the new Winter Wanderlands set all about?

Get ready to deck the halls because the Gods Unchained team is excited to announce their latest mini-set: Winter Wanderlands!

This festive set will include 20 cards, all with a winter theme. You’ll be able to find new limited edition cards unique to this season, so be sure to collect them all! Plus, the set will include exclusive, limited-edition collectables that players can use to make their in-game experience even more personalised.

For lore enthusiasts, the mini-set will also offer a standalone festive story focused around the Goddess of Deception, Ludia, and Orfeo, her Champion in Gods Unchained’s world.

The set will offer something for everyone, with new limited edition cards being unique to this season. Hardcore players will find new ways to complement their battle strategies by expanding their card roster, while dedicated collectors will be able to hunt down new cards unique to this season. The six legendary champions themselves — Lysander, Neferu, Pallas, Orfeo, Selena, and Valka — will make an appearance with unique festive cards inspired by these key players.

So bundle up and get ready to explore the Winter Wanderlands!

Winter Wanderlands: What’s in the deck?

So what exactly can Gods Unchained players expect in the new 20-card deck? The cards will act as a tool to guide us through the various interactions between the Christmas-themed characters in their first journey.

The pack will contain six super valuable chase cards with lots of in-game utility comparable only to the likes of Martyr of Whiteplain and the Blade of Whiteplain.

But that’s not all! They’ll be 14 more cards that will be able to work with the chase cards to make them even more desirable.

The legendary creature cards include:

There will also be two exclusive in-game trinkets that players can get their hands on.

If this sounds awesome, make sure you get your hands on it! The team is only selling these for a limited time, and there is only a limited number for sale too. If these are not sold out for any reason, they’ll be forfeited. This will be a limited-edition set that you’ll want to get your hands on before the deadline. So don’t miss out!

Gods Unchained is about to make this winter even more magical! Immutable is celebrating their new Winter Wanderlands card set release by hosting a series of Collaborative Community Events, starting with “Unlocking The Candy Chain”.

Players will be teaming up to pull off a special feat and when all links of the Candy Chain are broken, each participant will get their hands on an exclusive card called “Unexpected Gift”. So break out your warmest sweaters, because Gods Unchained has some much-needed winter fun in store.

The Gods Unchained developers will also be holding an exclusive lore-focused event, with players encouraged to dive deep into the game’s story. Who knows, you might even walk away with some nifty rewards – the perfect incentive to participate! Make sure to follow Gods Unchained on Twitter and Discord for more information, and prepare yourself for a journey of discovery (and maybe even a surprise or two!).