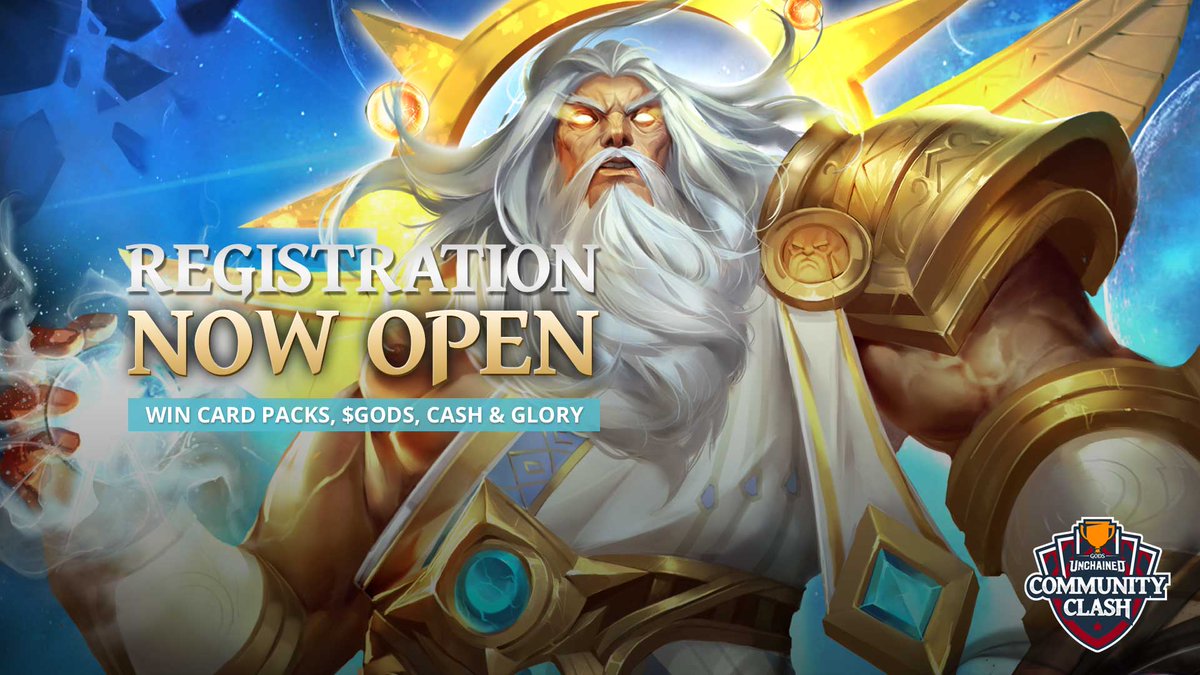 What is a Community Clash?

These community clash events have proved instrumental in developing the game’s grassroots scene over the past few years. With an aspiration to continue growing the game, Gods Unchained aims to be a competitive ecosystem with many opportunities.

The community clash tournaments give players the opportunity to step into a higher tier of competitive gaming with a platform to compete. This gives veteran players a great opportunity to earn more $GODS tokens, too.

Each event has different prizes, and each ranking has better prizes as per the position rank. So, if you rank 1st place, you can win $300, 300 $GODS tokens, three shiny packs, five leg packs, ten epic packs, and 20 rare packs. For lower places, these winnings will decrease.

In a tweet, Gods Unchained announced that the community clash-sponsored tournament is available for registration, with registration portals now open. This is incredibly exciting, and with the other 512 players allowed to play, it’s best to register as soon as possible!

In this community tournament, there is over $8000 worth of real cash to be won, as well as $GODS tokens. As part of the GUStakes Finals, the entry fee for this tournament is 15 $GODS. Registration for this exciting tournament closes October 21st at 12 pm EDT.

The tournament is part of the GUStakes Summer Series, the team finale for GUSLabs. This is a competitive tournament with four matches per round and a huge prize draw for the winner. The tournament starts Friday, October 21st, 5 pm, and is sponsored by GUStakes, Stenosis, Gods Unchained, Polygon, and Shapeshift DAO.

With a prize draw of $1,800 and 300 $GODS for the first-place winner, this tournament looks to be one of the most popular yet. GUStakes are providing over $3000 USD, and the rest of the overall prize draw will be provided by Gods Unchained. Each round will last a day, leading up until October 30th.

When it comes to game restrictions, there are a few that players need to be aware of. Here are the ‘allowed’ and ‘not allowed’ cards for the tournament.

As recommended through the Gods Unchained discord:

“When starting your match, TRIPLE CHECK that you have chosen the right deck and that it doesn’t have any restricted cards in it. You can now use the “Deck Checker” tool on the website in your match details to further confirm that your deck is ready to go!”

How to Earn Money in Gods Unchained

The Immutable-based game Gods Unchained is one of the most popular play-to-earn games in existence right now. Players adore the game due to its fantasy elements and the fact that it tunes into the nostalgia of card games. With hundreds of events and earning opportunities, Gods Unchained remains popular.

Last month, the game announced two global esports tournaments with $70k in prizes. These tournaments promise to bring excitement to the game’s community, with the Gods Unchained Light’s Verdict: Showdown event taking place at the end of September.

By competing in regular tournaments and daily play, you can earn a lot of money simply from playing the game. The game uses NFTs to represent Gods cards, with different categories of rarity. The rarer your card, the more valuable it is.

Gods Unchained is always adding additional ways to earn through exciting tournaments, and exclusive card collections. In addition, Gods Unchained has recently released an update concerning the circulation and supply of $GODS, resulting in a one-off increase in supply.

These tokens are pretty valuable, and you can earn large amounts through staking pools. Staking rewards are distributed to all players who are active stakers, taking tokens from the pool and awarding them to players.

Of course, the tournaments are probably the best way to earn money and $GODS tokens. If you’re a pro player, you’re more likely to own better cards, landing yourself higher in the tournament ranks. Players can also earn expansion packs for their cards simply based on their performance in tournaments.

Gods Unchained is a great card-based play-to-earn and free-to-play game with various opportunities to earn and compete. The community clash team finale has some amazing prizes; if you’re not registered, you only have a few days left!