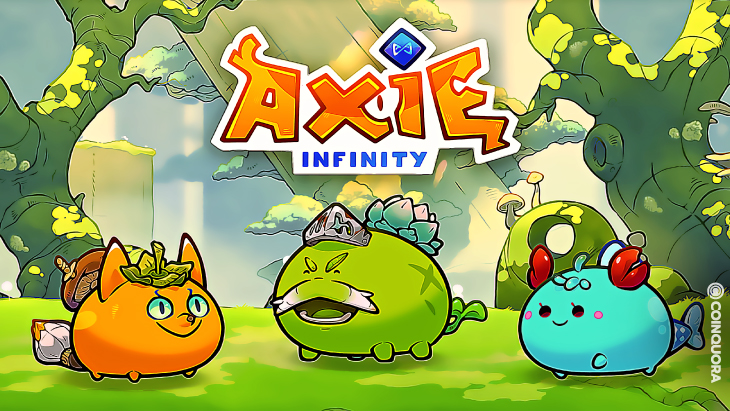 Sky Mavis has announced that Google Cloud is joining its growing list of validators for the Ronin Network. The Axie Infinity developer believes that the partnership with Google will not only help secure the Ronin chain but will also help it scale sustainably in the long term.

The new partnership was announced at Axie Con, a three-day event that brings together the Axie infinity community worldwide. This year, Axie Con was hosted in the Spanish city of Barcelona.

The partnership with Sky Mavis will allow Google Cloud to become a third-party enterprise validator for the Ronin chain. In essence, Google will be fully responsible for running an entire validator node on the network.

The cloud service will guarantee the security, efficiency, and overall management of the node to the benefit of Ronin users around the world. Also, Google Cloud will be required to deploy its vast tech resources and expertise to monitor validator traffic, uptime, downtime, and other metrics it may see fit.

Sky Mavis is confident that the partnership will bring more value to the Axie Infinity community. After all, Google Cloud is an established entity that has the necessary background to fully secure the Ronin Network.

Also, Sky Mavis has the opportunity to leverage Google Cloud’s infrastructure to help accelerate the expansion of the network. We are also learning that Sky Mavis will adopt Google Workspace as its main collaboration platform.

The developer says that in the past few months, it has significantly expanded its team around the world. This has been done to accelerate the development of new products. Sky Mavis also plans to add 100 more employees to its Vietnam office over the next one and a half years.

The company believes that Google Workshop provides the right tools to help its local and global talent collaborate and share ideas for Axie infinity.

Other Network Validators on Ronin

Although Google Cloud is a high-profile catch for Sky Mavis, it is not the only validator in the fray. In fact, an update released last month showed that Ronin has already secured 17 node operators. Sky Mavis plans to have at least 21 validators in the near term to help secure the network.

Why The Addition of Google Cloud Is a Big Deal?

The addition of Google Cloud comes after the Ronin network suffered one of the biggest hacks in crypto history. The extent of this breach remained relatively unknown in fact, it was reported that it took the security team at Sky Mavis days to figure out something was wrong.

In the end, over $600 million was stolen from Axie infinity wallets. The Ronin Network was shut down for a few days to assess the damage. It became clear that the hackers had, in fact, managed to breach five out of the seven validator nodes on Ronin.

This massive breach reinforced the need to create and deploy more secure and reliable network validators. As a matter of fact, immediately after the hack was contained, Sky Mavis began scouting for new validators and would add several in the months that followed.

Google Cloud is the latest in this list, and it won’t be the last. Although Axie Infinity has recovered somewhat from the hack, it will take time before overall confidence in the network is fully restored.

The Ronin Network: The Future of Axie Infinity

When Axie Infinity launched, it was an Ethereum-based decentralized application. However, due to network congestion and high gas fees, the P2E game felt that it needed a more scalable chain that would support future growth.

Sky Mavis decided to launch a new EVM sidechain called Ronin. Axie Infinity then migrated to the Ronin Network, and it will remain there in the future. However, Ronin is not just about Axie Infinity.

In fact, Sky Mavis wants other developers, including the Axie Infinity community, to create exciting new games on Ronin. The network believes that it has the right attributes to support a broader ecosystem of web3 games.

Sky Mavis has also launched the Mavis Hub, a P2E gaming launchpad designed to bring more projects to the Ronin Chain. Eventually, Ronin could evolve into a major web3 ecosystem.

Axie Infinity: The Ups and Downs

Rated as one of the most successful P2E games so far, Axie Infinity has not escaped its share of ups and downs. For instance, the migration to the Ronin network was a major highlight. However, the $600 million hack earlier in the year was perhaps the biggest setback in the game’s history.

Also, Axie Infinity is not where it used to be a few years back. The game has seen a sharp drop in active users in recent months. The AXS token has also fallen sharply from all-time highs. However, things are not that bad.

After acknowledging that Axie Infinity had major sustainability questions, Sky Mavis began rebooting the game under the title Axie Infinity Origin. The goal was to retool the in-game economy, improve the gameplay further, and give players more power in decision-making.

Axie Infinity Origin is yet to hit the success reached by the original game. But it has so far attracted a lot of new players.