How to Play and Earn in Ember Sword 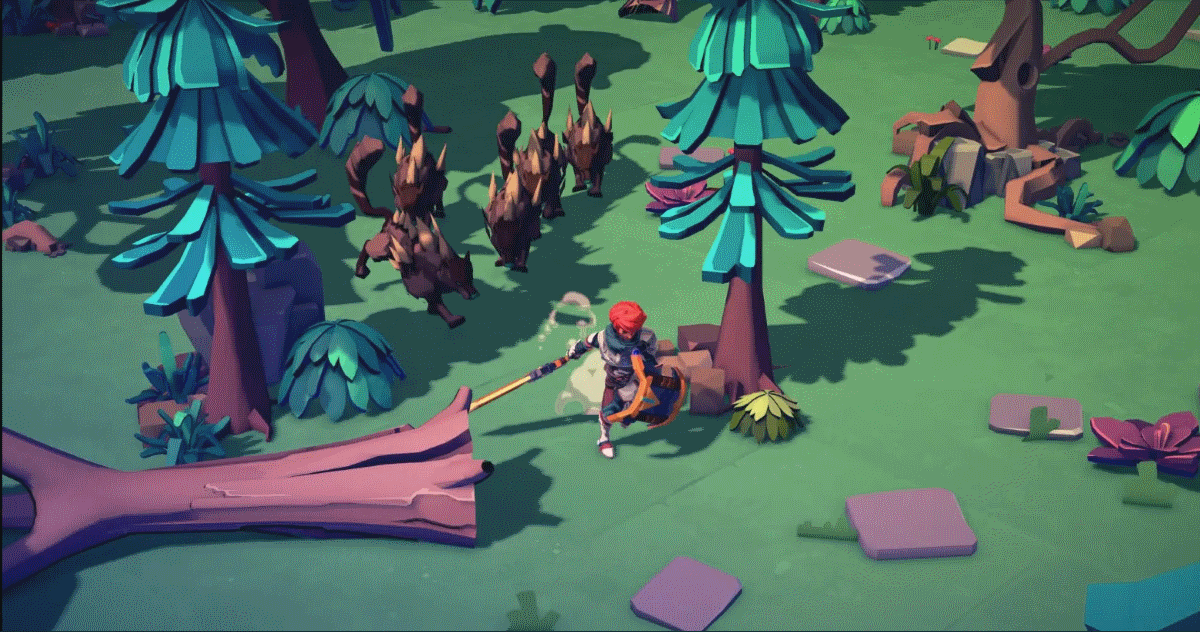 Ember Sword is a play-to-earn MMORPG by Brightstar game studio. The ultimate version will run on PC first, followed by a mobile cross-play and leverage the Immutable X network. The game is still in development.

We are very excited to announce our partnership with ImmutableX, the leading Layer 2 scaling solution for NFTs enabling secure minting and trading! To learn what this means for the community and us moving forward, read our new blog post:https://t.co/GsDiBLle8k pic.twitter.com/RNQz8ofHoc

This article will delve into how to play and earn in Ember Sword’s final game when it’s ready.

The game takes place in a dystopian fantasy universe with a fast-paced combat system. In the beginning, you build your character and choose a home nation.

Your aim is to reach a level of a highly-talented merchant by performing professions, collecting rare resources, and fighting against monsters and bosses.

Every time you join the game, you can start with a new weapon. You don’t have to use the same all the time. There’re three types of weapon categories you can choose from: melee, ranged, and energy. You’ll find several choices under each category. Similarly, there’ll be three types of armor: Heavy (plate), Medium (leather), and Light (cloth).

While building your character, you can mix and match these gears to create your playing style. The team management strives to make many weapons, gear, or other equipment visible on your character. For now, we know that the following equipment will be visible: head, chest, gloves, legs, boots, shoulders, capes, and hats.

The world of Ember Sword, known as Thanabus, is made of four nations. The first nation, Solarwood, provides life in the woods. Dusceron is for those who wish to escape to the desert. Jungles surround Sevrend nation, and Ediseau is a tundra.

Each nation has 3 types of territories: Kingship, Wilderness, and Outlaw. Every territory has unique resources.

How to earn in Ember Sword: Caravan trading

Your home will be in one of these, and you can gather resources found in your territory. You can play the role of a traveling merchant by participating in caravan trading.

The gameplay allows you to sell the resources you collected near in home nation to other nations. The way to do this is to launch a caravan trade from the nearest city to the Outlaw territory, which is a free-to-play region for all players. But be careful! It is more dangerous than the other territories.

Another twist is the vulnerability of small caravans. These are subject to attack from thieves. That’s why you must collaborate with other players to protect your goods while traveling.

In the Wilderness and Kingship zones, you can battle against bosses, monsters, and beasts. Play-to-earn mechanics include dungeons, crafting, and resource gathering. You can join the battles alone as well as in teams in this mode.

However, you must be the first player to kill the bosses at random locations to earn the rewards. You receive a limited-edition card illustrating your victory over that boss when this happens. To unlock a collectible, you need to gather all cards in a related collection.

The team announced that the rewards in PvP mode would be higher. The PvP battles take place in the Outlaw territory. There are more challenging monsters than those in the PvE mode. Also, the resources are rarer. This mode also deploys the guild feature that enables you to team up with your friends to fight other real players.

If you die in the PvP mode, you lose most of the gear you used in the battle. This mode is also skill-based (see below), which means that there’s no way to pay to win. You must develop the necessary skills to win the end game; having great gear is not enough.

The reward system gives the players who win the battle limited-edition cards. These depict the details of each battle you win. Once you collect all cards required to reach the final battle, you can unlock a collectible.

Both PvE and PvP collectibles are tradable for the game’s native token, EMBER. It’s an ERC-20 token. Players can use it to buy land plots, collectibles, and other items inside the game.

How to earn in Ember Sword with collectibles

Card collectibles that players earn in PvE and PvP modes are not the only collectibles in Ember Sword. Other items like skins, pets, and avatars are also collectibles.

All collectibles are limited-editions. The team will distribute different collectible types every month, and players will acquire them by participating in PvE and PvP activities, similar to those explained above.

Players will be able to buy them from others if they miss their initial release because the same collectible type will not be distributed again.

Collectibles don’t have any impact on the gameplay. That means they won’t help you win the game. On the other hand, as in the case of the card collectibles, you can sell every collectible item to earn EMBER tokens.

How to play Ember Sword: Skills and professions

The progression in the Ember Sword PvP game is skill-based. You’ll increase your levels starting from zero all the way up to 100.

There’re different types of weapons and gear that enable you to perform these professions. You can increase your level by participating in the related activities using the same weapon over and over again.  Increasing your skill level will allow you to equip better gear and collect more resources.

The Ember Sword reward system drops loots to the ground during gameplay. If you’re playing around, you’ll have a period of time to pick up the loot. In case f team plays, the system will decide which player gets the loot. In the final game, each loot will have a utility.

Owning lands doesn’t bring any pay-to-win advantage. However, landowners will receive a share of the revenue produced in the estate your land plot belongs to. 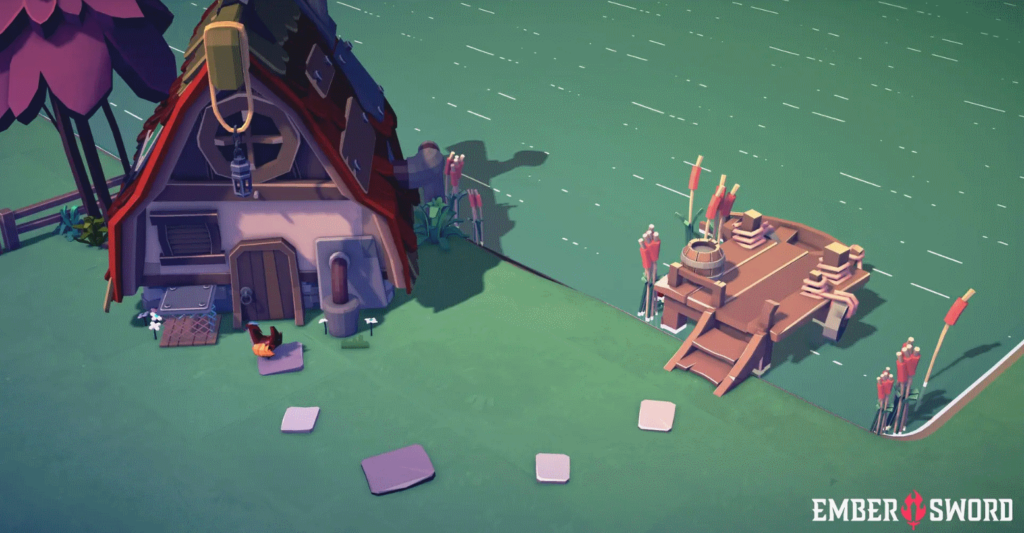 Regular plots: 1×1 land plots which are the foundations of the Ember Sword lands. Potential traits include rich mineral deposits, rare monster spawn, entrance to a cave, small house, and campsite. Perks include a percentage of the revenue generated, title of sir or lady.

Settlement plots: These are also 1×1 land plots. The additional benefit is the ability to place buildings. They can function as resupply stations, for instance. Placeable buildings include small player housing, small guild house, and small player store. As in the case of regular plots, you receive a revenue percentage; the titles are baron and baroness.

Towns: Their size is 2×2, equaling 4 plots. You can build more functional buildings in towns, such as refinement stations, crafting buildings, medium guild houses, and exchange for trading game items. The titles given are earl or countess.

City: These are the centers of trading where players can move gathered resources to other nations by building a Caravan trading post. The largest virtual buildings of Ember Sword are found here. In addition to everything in Towns, you can build large guild houses and portals to transport. Their size is 4×4, equivalent to 16 land plots. You receive the Duke or Duchess title.

Ember Sword sells the land plots in a series of sales events. Each nation has 40,000 land plots, so the total number of land plots in Ember Word is 160,000.

The first NFT drop for land sales was the land plots in Solarwood nation. At the moment, you can only purchase them through the secondary market on OpenSea. At the moment of writing the article, the lowest price for a regular land plot is 0.135ETH.

How to earn in Ember Sword as an artist

Artists will be able to submit designs that can function as collectibles, such as skins, avatars, or animations. To this end, the development team plans to launch “The Artist Workshop.” The community will vote on the designs, and the winning designs will be added to the Ember Sword collection of collectibles.

As an artist who created the collectible, you’ll receive a commission every time players trade your artwork for EMBER.

How to play in Ember Sword Technical Test

Ember Sword is executing a test run at the moment, and it’s open to owners of the badge and land NFTs.

Basically, the test version allows players to explore the world and participate in crafting, mining, and woodcutting. Crafting includes cooking and smithing. In smithing, you can craft items with stats. You can also harvest resources on farms; these include food items like carrots and pumpkins.

While playing, you can chat with other players. However, this version of the game is an online demo, and it features just a limited play area, and only a few gameplay loops are included.