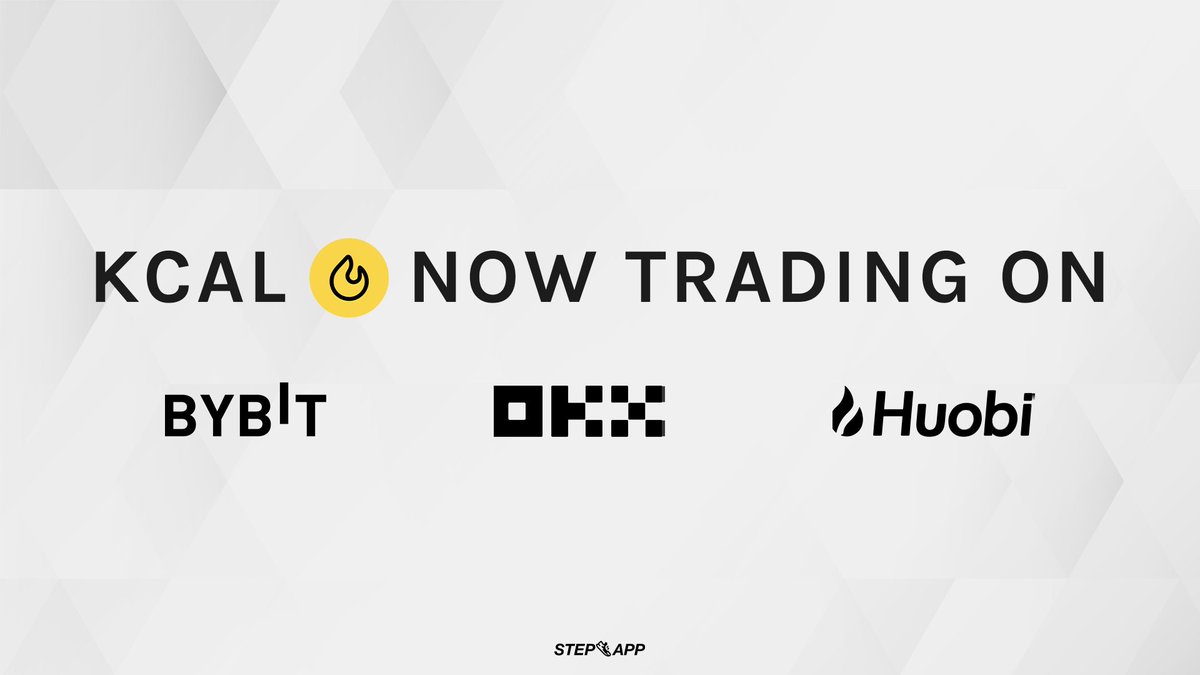 Users can now trade KCAL on ByBit, OKX, and Huobi Global on Step App. Time to trade! Let’s find out more about this news and how it all works.

KCAL is the move-to-earn app Step App’s native currency. FITFI tokens act as governance tokens, whereas KCAL tokens are used for several things. KCAL can be used for minting SNEAKs, and can be earned whilst running and staking SNEAK NFTs.

All SNEAK NFTs must be staked to earn KCAL, and this earned KCAL is issued in epochs of 10 days. Unstaking before KCAL is claimed burns the pending KCAL.

In terms of Step App’s KCAL distribution, there is a maximum supply of 5,000,000,000 (five billion tokens). When it comes to the KCAL token, it is distributed to various elements of the game.

KCAL trading has now begun, with options to trade on ByBit, OKX, and Huobi Global. Also, KCAL deposits opened at 9 am UTC yesterday. On Huobi, the KCAL spot trading will open when the deposit volume meets the demand on market trading. Similarly, KCAL withdrawals on Huobi Global opened at 10 am UTC today.

You can now trade $KCAL on @Bybit_Official, @OKX and @HuobiGlobal 🎉

It is now time to trade, and here you will find the links to trading on ByBit, OKX, and Huobi. This allows you to trade your KCAL on trusted cryptocurrency exchanges, widening the opportunities for players using Step App.

This news brought mixed opinions, especially on Twitter. Some users were pleased, stating that they were trading right now. However, for the most part, other users had negative comments and burning questions.

Looking at some of the negative comments the news brought, some users were confused and annoyed about the price of KCAL, and how it changed so much in a matter of minutes. Of course, this is just the nature of the crypto market, and users should always seek financial advice where possible.

However, besides a few negative comments, users were mostly curious about how they could trade and claim their FAT points in exchange for KCAL. This was a popular question, with over six users asking the same question. For this reason, we’re expecting Step App to announce more details about this at some point in the future.

Of course, with how the crypto market looks now, many users are wondering if Step App’s FITFI token is a good investment. With a price prediction from CoinCodex, the current forecast for Step App is Bearish, as we’re currently in a Bear market.

Of course, it will depend on your portfolio composition, investment goals, and risk profile. Additionally, it is quite early to tell how great the investment is, as we’re in the early days still.

The FITFI token first came onto the open market back in April of this year. At the time, its price was around $0.12. At the end of April, Step App announced that the token would be available on the ByBit exchange.

As soon as this was announced, the price increased, closing the month at $0.4885. Just one month later, it hit a high of $0.7346. Afterward, the UST stablecoin became de-pegged, causing LUNA to collapse and leading to a crypto crash. Just in mid-May, FITFI plummeted to $0.08271.

Once Usain Bolt was announced to be the face of Step App, the price started to increase slightly. However, we see that the price is still pretty low now, at $0.03854. From Currency, long-scale predictions are estimating the token may be worth $0.29 in July 2025. So, we’re not looking to see a massive value in the token at this point in time.

The KCAL token is used as the game token, and you can earn it by running and moving your body. You use the token to equip yourself with a pair of Step App SNEAKs, and once you have these, you can start earning this token.

This token is more valuable, so it takes longer to earn it at the moment.  The KCAL token began trading yesterday, and at the point of writing, the token is worth $2.1 USD.

How to Play Step App

Step App is one of the biggest growing move-to-earn apps in the FitFi sector. FitFi refers to the merger of fitness and finance.

Step App is said to be the future of fitness, with the incentive of earning cryptocurrency in exchange for movement. Of course, you’ll need to invest in a sneaker NFT in order to start earning.

Once you have your NFT, you can walk and run, earning FAT points and KCAL tokens. The more you get and the more you move, the more passive income you’ll be able to make from Step App.