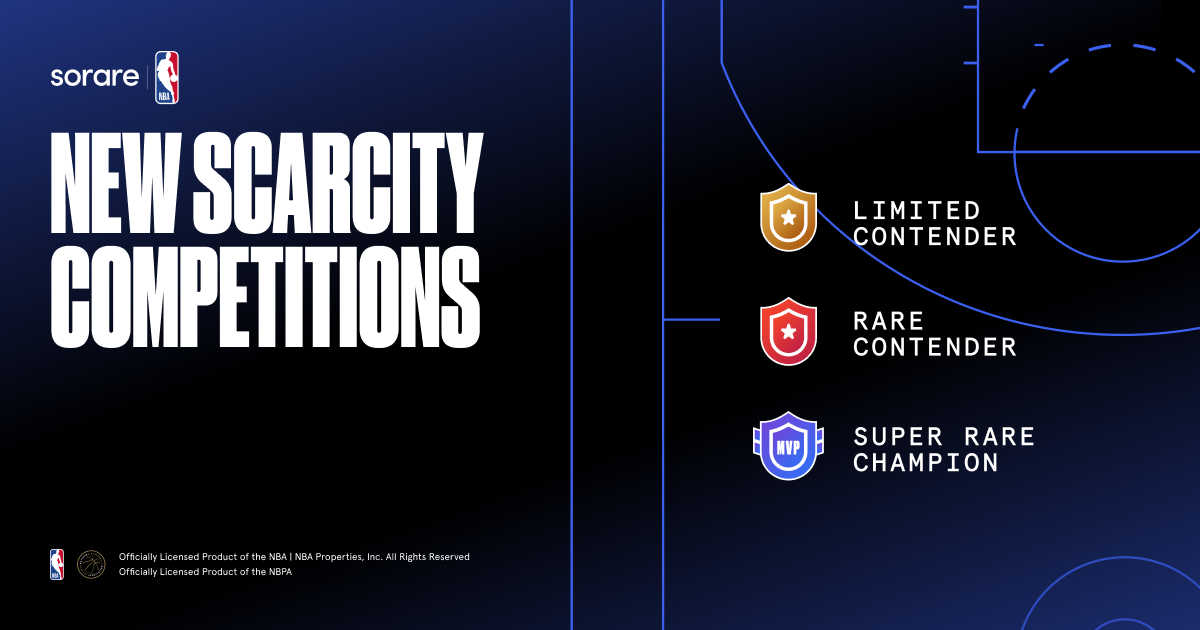 The Sorare NBA beta, which was launched this week, is about to have its inaugural gameweek over the weekend. This will be the first time NBA fans and Sorare users will compete and get a feel of the beta.

However, we are learning that in the first gameweek, only the Common Contender and Common Champion competitions will be available. But things will heat up significantly in the second gameweek.

The Sorare NBA team has announced that it will roll out new scarcity competitions that will feature limited and rare cards. There is also a plan to launch Super rare competitions, which will come later.

Sorare NBA: What Are Scarcity Competitions

As the name suggests, scarcity competitions simply refer to contests that feature rare and limited cards. According to the initial plan by Sorare NBA, three competitions will fall under the scarcity benchmark.

However, you can, for now, still enter with three rare cards and two limited cards. Sorare NBA says it will monitor Rare Contender entries over the coming weeks and adjust the eligibility criteria as we move forward.

As such, the compilation of cards needed for the competition may significantly change in the future.

The third and final competition is the Super Rare Champion. Like the two before, participants will need super rare cards to get in. More on this later.

Why Scarcity Competitions Are Launching in Gameweek 2

Sorare NBA notes that it actually wanted to have these competitions available right from the inaugural gameweek. However, the NFT-powered fantasy sports game acknowledges that players are still building their teams and finetuning their lineups.

It, therefore, makes sense to launch scarcity competitions a week later when everyone will presumably be ready for the full action.

Also, Sorare NBA is now in its beta. There are still a lot of things within the NFT game that need to be monitored. It is, therefore, possible that the developer team will opt for a phased rollout to ensure the ecosystem remains balanced.

The Super Rare Champion will be the crème of the crop as far as scarcity competitions are concerned. Unlike Rare Contender and Limited Contender, this one will be available in Gameweek 3.

However, Sorare NBA will open up the competition starting October 24th. This will give players a chance to build up their teams well in advance. Eventually, the goal is to limit Super Rare Champion to five super rare cards only.

But since we are still in the beta phase of Sorare NBA, some exceptions will be made. In Gameweek 3, users can enter the competition with three Super Rare cards and two rare cards. It is also worth noting that points in the competition will be capped at 120.

Sorare NBA: Building Up to The First Week

Sorare NBA launched its first beta earlier in the week. This was a big milestone for the platform, and we covered the story here in detail.

Naturally, we were all looking forward to the first gameweek, and a lot is coming. For starters, normal common card competitions will be on.

Managers will earn points, too, and they will finally be able to play Sorare NBA for the first time. It is also important to remember that this is the third in a line of sports fantasy games by Sorare.

The first one, which has so far been a success, is Sorare soccer. Secondly, Sorare MBL launched a few months ago and is already attracting over 300,000 users.

The addition of the NBA means that Sorare now has three of some of the biggest sports in the world. It also means that the web3 fantasy sports platform is building its credibility further. In the future, it will be much easier to attract more sports, players, and competitions as well.

Sorare is one of the most disruptive platforms in the world of fantasy sports. The web3 project is leveraging the power of NFTs to bring true ownership in this area. However, it is not the only platform that is reinventing fantasy sports.

DraftKings, one of the biggest web2 fantasy sports platforms, has also made forays into NFTs. And while it is not using Sorare’s model, DraftKings has made NFTs a core part of its service.

According to data by Technavio, the fantasy sports market will grow by around $6 billion between 2021 and 2026. The incorporation of web3 into all this will likely accelerate this growth in the near term.