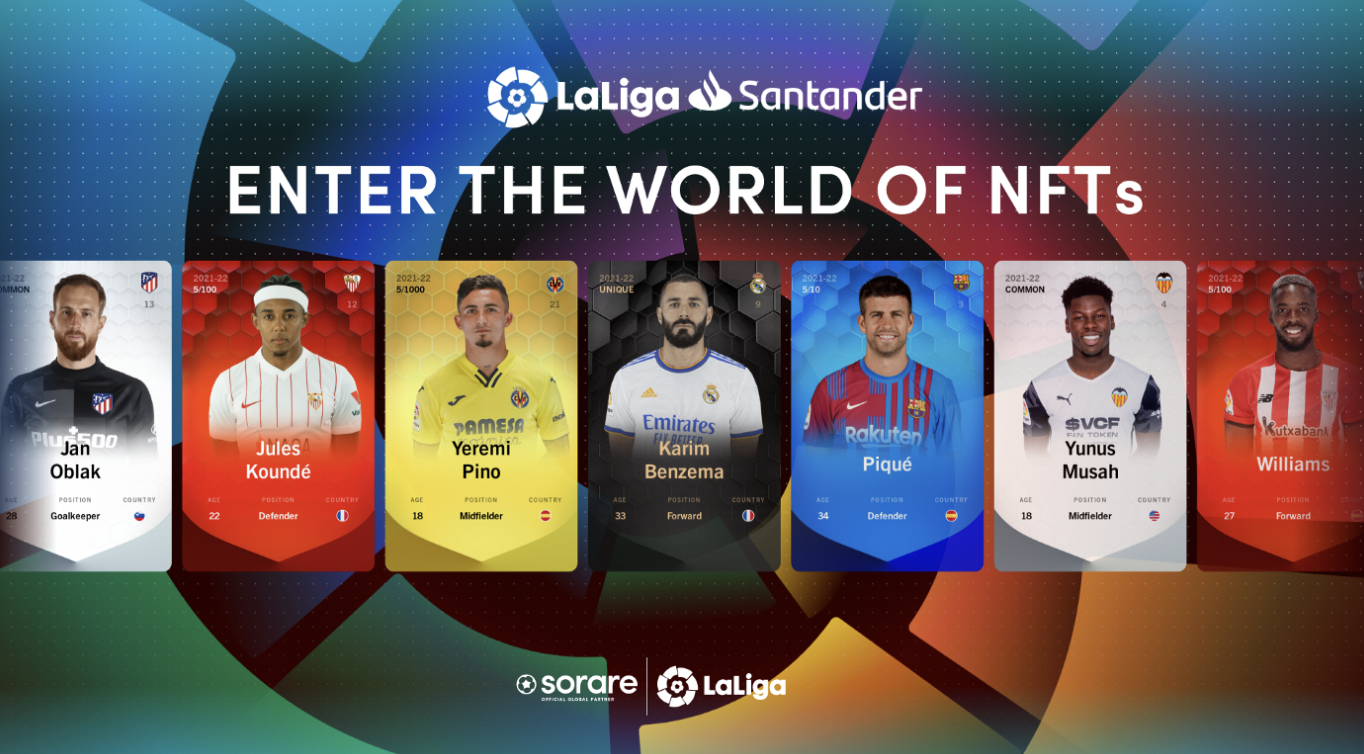 All 22 teams in the Spanish second division are now part of NFT global fantasy football for the first time. Sorare has now added the full LaLiga SmartBank, also known as the Segunda División, after adding LaLiga Santander early in the 2021/22 season and releasing an Android version.

This is an exciting time for fans of Sorare and Spanish football, since there are a lot of chances to scout and trade players in a league that isn’t well-known outside of Spain.

As Sorare put it back in August, “A lot of players get their start in the European second division and we are excited for Sorare Managers to scout for new and emerging talent.” Here’s what you can expect from the Sorare Segunda División.

As reported in LaLiga Expert, Sorare announced on Wednesday that Segunda División cards are now available to everyone. This follows the organization’s controversial decision to permit second-tier teams from the “big five” European nations to use the platform recently.

All 22 teams’ cards are now available for purchase in LaLiga SmartBank. Numerous of the top first-edition cards are currently being auctioned off. They are acceptable in all Global All-Star and Global U23 competitions, the new academy, and the majority of specialist and underdog competitions.

Additionally, a new European division for the second tiers in Spain, England, Germany, France, and Italy will be introduced later this year.

With the addition of LaLiga SmartBank, Sorare managers will have more ways to scout players and a bigger pool of players to choose from. From this weekend on, these players should also start getting into the reward pools.

If you aren’t on Sorare yet but follow the Segunda División or one of its teams, this could be a chance to use your knowledge of the league to your advantage and get a leg up in the fantasy football tournaments on Sorare. Head over to our Sorare beginner’s guide if this sounds like you.

What kind of league is the Segunda División?

The Spanish Segunda is distinguished from other leagues around the world by its tightness and frequent use of defense. The typical number of goals scored per game is almost never high. On Sorare, you shouldn’t anticipate to encounter many all-powerful attacking stacks because there aren’t typically that many one-sided games.

Still, there are usually a few teams that stand out as the best, and the financial benefits for teams that have just been relegated are often big. At the bottom of the league, it’s a bit of a mixed bag, with clubs like Real Zaragoza and Malaga that used to be big in LaLiga but now seem stuck at this level.

There are also a lot of small clubs from the provinces and a few island teams, like the small UD Ibiza. This year, FC Andorra, which is owned by Gerard Pique, a Sorare ambassador, has brought Spanish second-tier football to the tiny Pyrenean principality for the first time. Oh, and Villarreal’s B team is there, which makes the whole thing even stranger.

Who should you root for?

As a general rule, you won’t go too far wrong if you bet on teams that have just been kicked out of this league. Only Huesca failed to finish in the top three in their first season back in La Liga after being kicked out of the Primera.

This season, the three teams that just dropped from the top division are Levante, Granada, and Alaves. After being surprisingly relegated on the last day of last season, Granada is the bookies’ favorite to win promotion this season.

They are led by former Middlesbrough and Nottingham Forest manager Aitor Karanka. They’re off to a good start, having won 4 of their first 6 games, but Eibar beat them 4-0. Eibar should be a contender again after missing out on automatic promotion by just a few minutes at the end of last season.

Is anyone else you should root for?

Levante and Alaves should also do well now that they are at this level. Levante kept players like Jorge De Frutos and José Campaa this summer, so they still have some top-level talent on their team.

Alaves, on the other hand, has made a lot of changes to its team and seems likely to take the defensive approach that helped new coach Luis Garcia lead Mallorca to promotion two years ago. The Basque team is in first place after six games, so he’s off to a good start.

Las Palmas looks like the other team that has a very good chance of going up. Under Garca Pimienta, they play a more open style of football and lost in the playoffs last season. Sporting Gijon and Real Oviedo, both from Asturias, and Tenerife, the runner-up in the playoffs last year, also hope to be in the mix.

But the Goalkeepers are really good!

Anyone who has been playing esports NFT games and Sorare for a while knows how important it is to find a good goalkeeper at a good price and how hard it can be to do so. That’s difficult, especially with Rares, as common cards are no longer permitted in the well-known Global All-Star threshold tournament.

If you are looking for a goalkeeper, the addition of the Segunda División should be good news. Early edition cards may sell for a lot, as is often the case, but once prices level off, there should be a tonne of excellent options in a league where clean sheets are common, even for some of the weaker teams.

At the time this was written, LaLiga SmartBank 2022/23 averaged just 2.12 goals per game, and 8 teams kept clean sheets in at least half of their games. Burgos, a team that wasn’t expected to do well, hasn’t given up a single goal yet this season. Their four 0-0 draws and two 1-0 wins have put them in the top six.

In 17 of his last 21 games, their goalie José Caro has scored 60 or more goals. Soraredata says that over the last 40 games, he has been the best goalkeeper on the whole platform (minimum of 20 appearances).

That’s for a small team that was one of the favorites to go down at the start of the season. Even though he won’t be able to keep up this kind of great play for the whole season, it shows that it should be easy to find a reliable goalkeeper who scores a lot of goals in this league.

Advice for the Sedunga Division

The Sorare Segunda Division announcement isn’t the only important partnership for the Ethereum NFT game in recent days, with Sorare joining forces with Plan A to go net-zero.