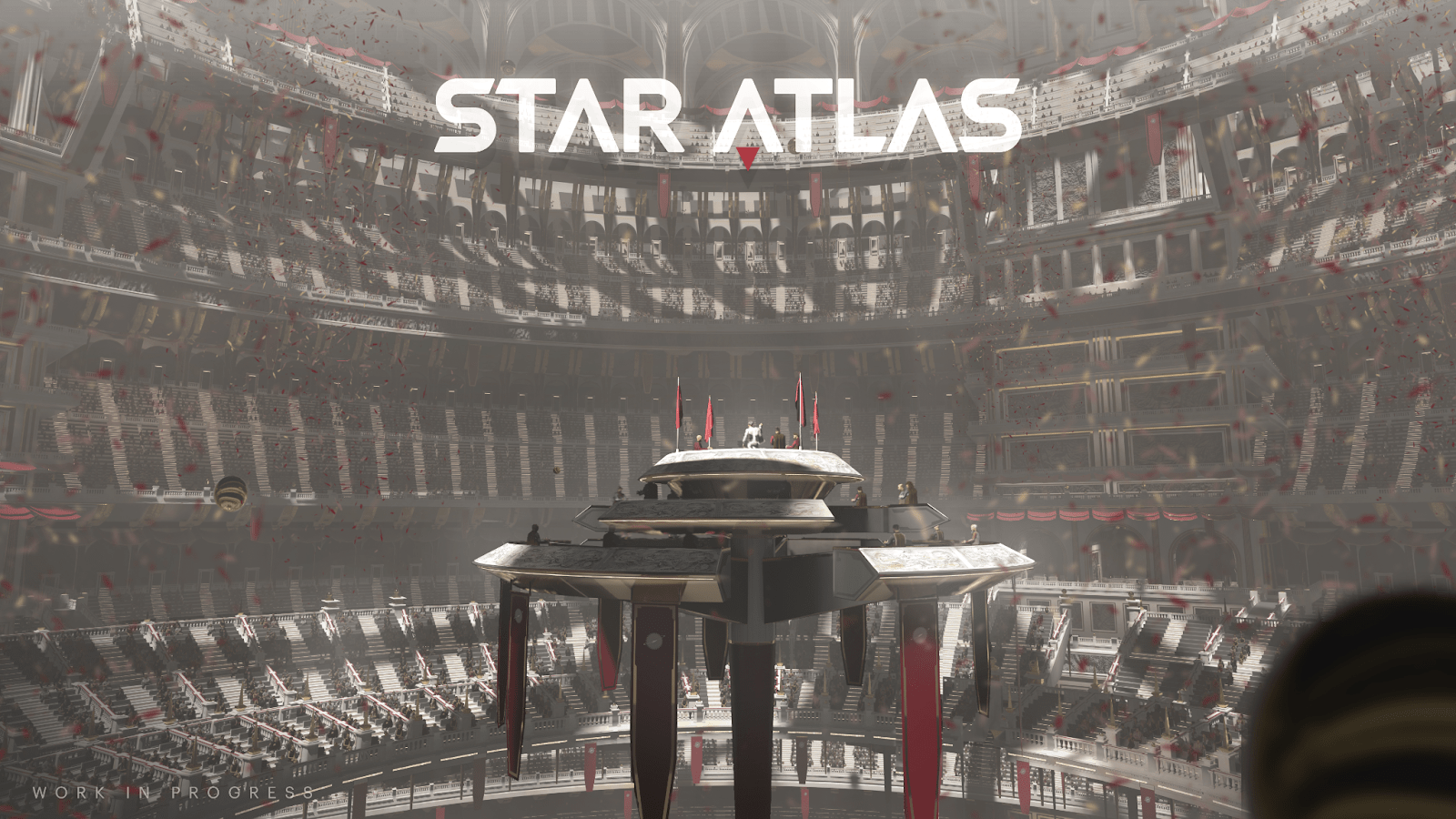 Star Atlas is a play-to-earn (P2E) game that was launched last year, and ever since it has received nothing short of extreme popularity. Some consider it the best metaverse project and some simply love its gameplay. Similar to most play-to-earn games, Star Atlas requires an initial investment to get things started. Once you have all the requirements, you’re ready to earn a real profit! But, what’s the initial cost, and does the amount you earn justify the initial investment? And finally, our thoughts on life amongst the stars, its gameplay and ultra-high-definition graphics.

Continue reading below to get answers to all these questions.

Origins: What is Star Atlas?

Star Atlas is a multiplayer play-to-earn game that is played directly on your web browser. IIf one game could give a vivid example of the metaverse, it certainly would be Star Atlas. Immerse yourself in the spectacular living of the metaverse and experience the future, all while earning great profits. Star Atlas is shaping the future of video games with an immersive virtual universe where players are rewarded for the time spent exploring the deepest regions of outer space.

Star Atlas players can experience the next generation of real-time graphics using Unreal Engine 5’s Nanite which allows for cinematic quality video game visuals. Whether you enjoy their gameplay or not, one thing is for certain – you will not be disappointed by the cinematic graphics of Star Atlas.

Created on the Solana Blockchain, Star Atlas has targeted a much broader audience for its gameplay. So if you might catch yourself saying ‘well I’m not a gamer’, Star Atlas still might be for you! While we are on the topic of gameplay, let’s cover it briefly in case you want to start right away!

Star Atlas has a few requirements to get you going, such as:

Firstly, you need a Solana-based wallet, for which you have plenty of options like Phantom, Solflare, and Sollet.io. From there, you will have to send small amounts of Solana to your new wallet. You can send a small amount of Solana like 0.1 SOL from any third-party crypto trade centre that supports the SOL-based transaction. Just beware when sending Solana to your wallet you choose SOL as your transaction network.

With the one-time setup out of the way, now it’s time to choose your Faction. What’s a faction? New players have to choose a faction and start in a faction-secured safe zone. This enables the player to explore all the basic functions of the game except destructive based gameplay loops such as rescue, combat and salvage.

Star Atlas is undoubtedly the future of metaverse gaming. Emerging from the applications enabled by blockchain, real-time graphics, multiplayer video games, and decentralized financial technologies. Star Atlas uses blockchain technology using the Solana protocol to establish a largely serverless and secured gameplay experience. As in most play-to-earn crypto games, non-fungible tokens obtained and traded within Star Atlas create an economy that replicates the tangibility of real-world assets and ownership.

What’s interesting is the built-in deflationary mechanisms of Star Atlas, where materials used to craft items get destroyed when they construct a new item.  Star Atlas also becomes more challenging when you leave behind the safety of NPC populated towns and travel into the deep beyond. The survivors however come home with greater rewards. 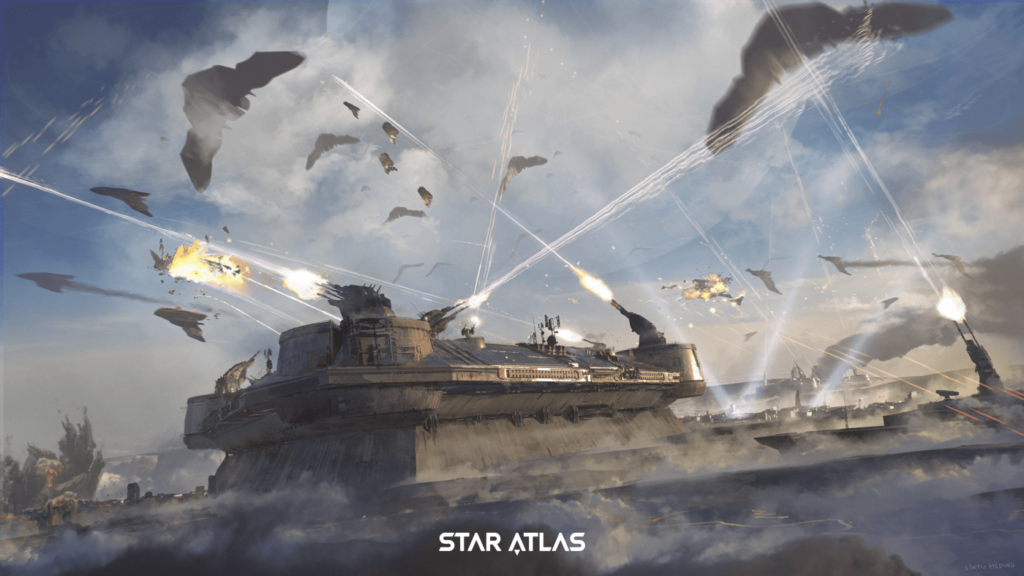 As mentioned above, to get started in Star Atlas you need to own at least one spaceship to be able to send it on missions and earn money. Each spaceship enlisted for a mission will be rewarded in ATLAS (in-app utility token) each day, but it will also have maintenance and resupplying costs. Currently, there are four types of resources that an enlisted spaceship requires: Fuel, Food, Ammo, and Repair or Toolkit.

ATLAS and POLIS are the two main utility tokens of Star Atlas, where ATLAS is the payment token used for transactions and exchanges, and POLIS is the governance token. ATLAS is the form of currency/income in the game. The market dictates the price at which the buy-side perceives the value of the production of in-game assets. The currency is inflatable. The monetary mass grows at roughly the same rate as the in-game economy.  A key concept in understanding how Star Atlas economy works is knowing the production system of the land.

The game’s galaxy consists of regions, solar systems, and planets, with a basic land parcel. This represents partial ownership of a planet’s territory. Production buildings lie on the land. In addition, land ownership is a must to participate in some of the governance levels, using POLIS. All land in the metaverse is subject to Land-Value-Tax, incentivizing owners to use it rather than simply holding it. This applies specifically to the production within the Star Atlas economy.

In order to partake in this activity, users need to make an initial investment using ATLAS or equipment. Basic resources (NFTs) act as input to maintain the mining output. Mining yields resources, which are then used to trade or create in-game assets to allow users to carry out their jobs and produce value within the in-game economy.

Star Atlas is not only revolutionizing the gaming industry but is certainly ahead of its time. An exciting combination of real-time graphics coupled with a variety of ways to earn makes it a top choice for crypto-lovers. Basing the Star Atlas universe in a Grand Strategy multiplayer genre creates engaging, long-term gameplay as factions battle it out in a universal spacescape under a constant state of flux. The pioneers of the virtual gaming world such as Ultima Online and Everquest created a world of possibility that was unimaginable a few years ago.

However, not allowing players to trade in-game virtual currencies opened a void for the likes of Star Atlas to fill. The virtual currencies market exploded with the popularity of World of Warcraft. Trading gameplay time for money was practical. Hence companies sprung up specifically to sell in-game tokens. But virtual currencies had their own limitations. With the game’s inception, entered a new era of gaming designed specifically for blockchain technology. Star Atlas is out to revolutionize the gaming-metaverse industry by using a wide range of mechanics. We’ll cover these mechanics in great detail below.

While the early generations of online games focused more on gameplay and less on economics, the second generation focused on the opposite. Star Atlas compromises on neither. Highest quality of gameplay with highest possibilities of earning! Now that’s a winner. So all the space fanatics, virtual game lovers and long-term supporters of cryptos, Star Atlas will not disappoint you.