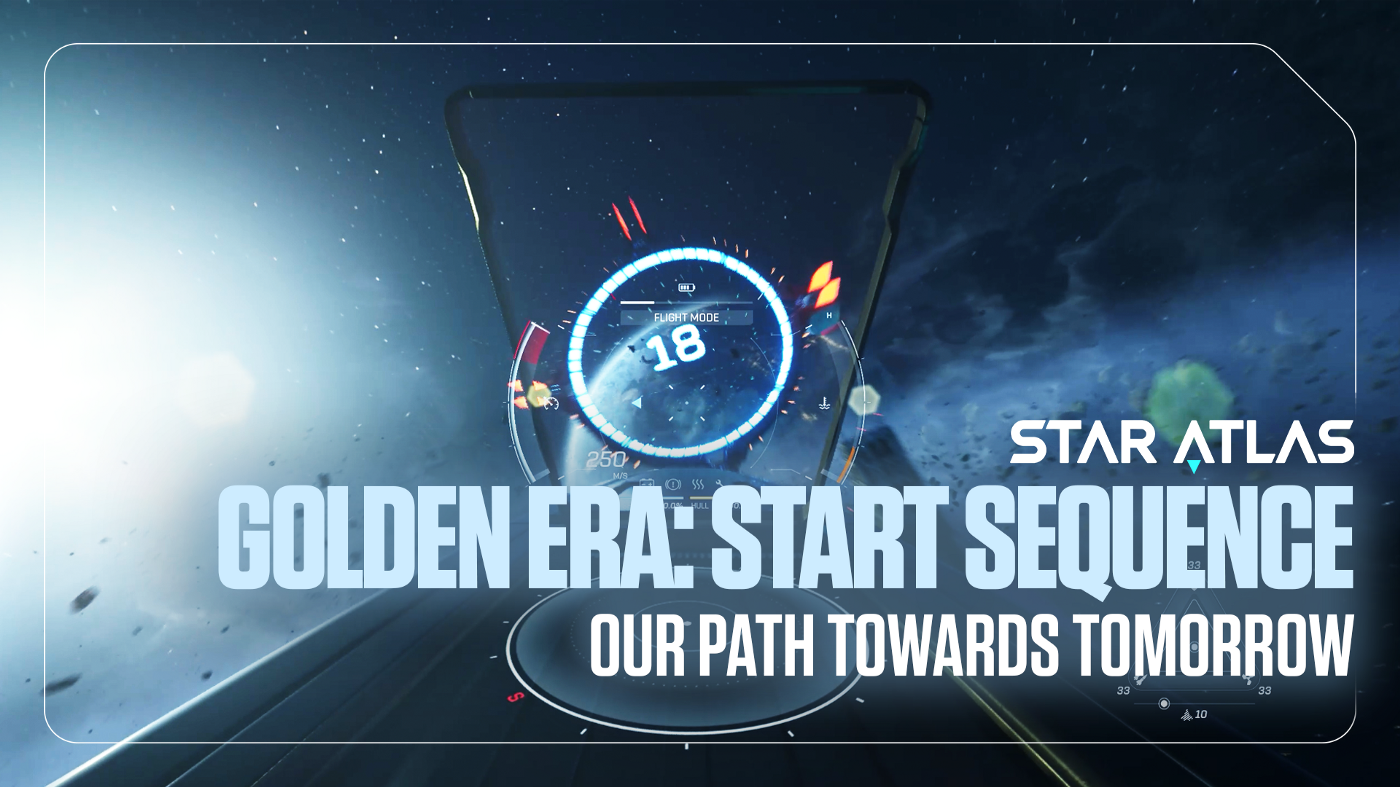 Today, Star Atlas makes the most important announcement in its history. The grand strategy game announces the launch of the Golden Era Start Sequence. Fans and community members will enjoy more than space exploration, territorial conquest, political domination, and living amongst stars.

Players can expect a game manual to prepare for the game in the coming weeks. However, in the meantime, they can positively contribute to developing the P2E platform and perhaps the galaxy. The announcement came via Star Atlas’ verified Twitter handle.

The initiative entails the primary purpose of Star Atlas to provide players with a solid foundation in the metaverse. The initiative will take strategy to the next level and secure a stronghold for players to develop a playing field. The plan will keep fans updated on the condition of external funding initiatives. More so, it will include an invitation from the Star Atlas community to the upcoming DAO community consultation.

One of the most important announcements in the history of Star Atlas – the Golden Era Start Sequence – is here!

Learn how to support us, plus much more!

The upcoming in-browser game module, the Star Atlas Golden Era, will be the first part of the game manual. The module will focus on the game’s economic elements.

The following are things to expect in the golden era start sequence accordingly.

A limited-time reducing discount campaign will give customers special commemorative skins. In addition, it will feature a mint of three titan ships.

A unique ship collection will be available through a time-limited discount promotion. Purchasers will also receive special commemorative skins. The current owners of the assets will receive another ship via airdrop as of the date of this release.

It will include important assets featuring claim stakes, mining drills, power plants and other resources. These assets will be required for SAGE mining activities that will follow after the introduction of the main net.

Click here to review more on the start sequence asset catalogue. Players should note that all sales will be in USDC.

The external funding initiative has ATMTA as its subsidiary. The subsidiary will focus on three essentials: the Solana Foundation Grant and blockchains in Layers 1 and 2. Lastly, there will be high-level negotiations with several venture capital firms, including funds for cryptocurrencies and gaming.

Earlier, we mentioned an upcoming DAO community consultation. The function of the Star Atlas DAO is primary. The community will get together to highlight how the galactic economy will become stable with active participation on their part. In addition, this phase also entails the timeline and details of all other initiatives.

The first section of the Star Atlas golden era game manual debuted on November 19. Therefore, explorers can get a detailed look and perspective into the upcoming game.

The Golden Era Start Sequence: Behind The Curtain

Every Faction, DAC, organization, and captain will attend the most important event in the galaxy’s history. This follows the signing of the Treaty of Peace by the Council of Peace. The leaders of the three main factions, MUD, ONI, and Ustur, have agreed to move on with an aggressive plan. The plan is to stabilize the civilized galaxy as underlying tension and open conflict expand throughout the medium-risk zone.

The COP agreed to launch the plan by auctioning off deep space research equipment at drastically reduced one-time promotional prices. The COP undertook this action to unite the whole Star Atlas community.

Since the Convergence War, a small stockpile of other unique ships lay dormant in secret Council harbours. In particular, the Council’s Titan Class ships—the galaxy’s fiercest predators—will be up for bid in this exclusive auction. The stockpile will also be made available at discounted prices.

Following this multi-week auction, the Council of Peace will sell some interests in planetary claims. The interests, including land and private quarters on the Central Space Stations, can house any species in the galaxy. This will give owners an exceptional opportunity to place their homes in prestigious areas across the entire globe.

The Council will summon the inhabitants of the stars to take a stand. They will launch the Golden Age of space exploration as a wave of dark emotions will threaten to destroy order.

Part 1: The Flight of The Titans

Part of ATMTA’s sales plan focused on a unique class of assets known as simply “the titans” is now public. It is part of the multi-pronged campaign to secure short-term cash for developing the Star Atlas project.

The word “titan” evokes respect and awe all around the galaxy. These enormous beasts of metal and destruction can destroy whole fleets and even worlds singlehandedly. They will undoubtedly impose order wherever they choose to go in this vast universe.

Each faction will only choose from one titan model as part of the current promotion. The estimated number of minted titan ships will rise to 18 subsequently. Click here to check the titan division and base price of titan ships per the four-week discount plan.

Most importantly, each Titan ship will generate ATLAS within SCORE at the VWAP of five million USDC. Additionally, each Titan purchased will entitle the owner to a special commemorative ship skin, signifying involvement in this momentous occasion. This plan will likely go into effect on November 21, 2022.

Part 2: The Harbors of The Convergence War

“Our Path Towards Tomorrow” will focus on ships whose total supply sales are under 1.5% of their mark. The lore of the galaxy refers to this fleet as the surviving pieces of the captured armament. The factions employed them during the Convergence War.

Some users will, however, participate in a unique acquisition scheme that includes discounts and airdrops of personalized skins. This will depend upon them choosing ships from this category during the sales event.

Star Atlas will airdrop one bonus ship of the same kind for each ship purchased based on a snapshot. This will satisfy the people of our community who purchased these ships at their original price. This plan will commence on November 21, 2022.

Part 3: The Claim Stakes and The Colonization of the Galaxy

The third section of Our Path Towards Tomorrow deals with another development in the Star Atlas Start Sequence plan. It entails the sale of claim stakes, the equipment required for the exploration and settlement of the metaverse.

Claim stakes are tangible items that must be brought to a planet to stake a claim to a plot. Claiming a planetary plot bestows the owner access to extracting available local resources. Claim stakes will be offered in 5 tiers: Common, Uncommon, Rare, Epic, and Legendary.

These elements of extraterrestrial infrastructure will be helpful as soon as SAGE launches on the Solana mainnet. Claim stakes will be crucial to extracting resources from planets and producing engaging economic gameplay loops. Production will involve using mining drills and power plants.

During this release of Star Atlas, it will be possible to buy space stations, mining drills, and power plants. In the middle of December, all information on these sales prices, supplies, and duration will be available.

There is one thing all races and factions can agree on. That is the sensation you get when you step foot on your property for the first time. This is especially true if the blockchain enables you immutable and guaranteed ownership rights.

The news of Star Atlas’ first-ever land claims offering will excite many explorers. Players will be able to construct homes with cargo storage space inside the station. Moreover, they will improve their ability to create resources and customize habitation, including command terminals, pet houses, and landing pads.

Tranches (groupings) of plots will debut with a discount of 10% on the entire amount of land available. At the end of each wave, these reductions will no longer be valid. Instead of buying a specific property, players will buy the claim to a certain type of plot. When the properties are finished, the selection procedure will start.

The cosmetic land claims will have six layers. Depending on the parcel size, these will be given the labels T0, T1, T2, T3, T4, and T5. Every plot in this release will come with a building, structure, or hab. This will be despite future land being provided unimproved and habs being acquired individually.

The ATMTA actively seeks funding from other sources despite the bear market and challenging macroeconomic conditions. Any MUD venture capital business, investment fund, or other prospective funding partners should understand that now is an exceptional time.

ATMTA is optimistic about the future of the Star Atlas ecosystem, defined by breakthrough software solutions. An example is F-Kit, a passionate and committed global community and immersive game components like ships, surroundings, and interior spaces.

The Star Atlas team is pursuing financing options in the Solana Foundation awards grants, among others in the Web3 space.

The Role of the Star Atlas DAO

The Star Atlas DAO is the ultimate embodiment of the Star Atlas community and has considerable funding. It is responsible for receiving a portion of the galactic marketplace’s fees and selling resources for SCORE.

Here, Star Atlas looks to gauge public interest in this subject. Star Atlas deliberates on operating solely upon creating the framework to allow the community to participate.

The initial release of Star Atlas’ WebGL deep strategy game SAGE is almost complete. It plans on making it available to the general public in the first quarter of 2023. Explorers, through the manual, will understand how the SAGE galaxy’s economy functions.

The document delves into several topics that the Star Atlas community may find interesting. Resource management, fighting, leveling up, and resource management transfer from SCORE to SAGE will pave the way for future interactions.

The Star Atlas Golden Era battle has already begun, as previously mentioned. A shrewd captain will make the most of the brief time left for preparation. He will learn as much as possible about the intriguing and strategic gameplay mechanics now unveiled to the community.