Star Atlas Releases Its Second State of the Economy Report 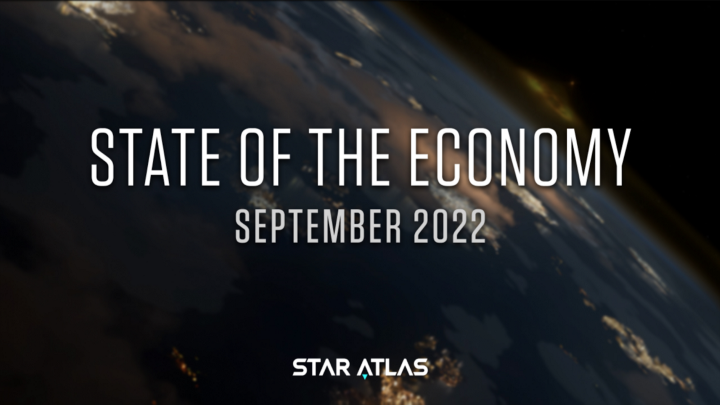 Star Atlas, the famous Solana-based play-to-earn game, has released the latest edition of its detailed report known as State of the Economy. The report was released yesterday, September 30, 2022, as the second of many to come. As always, the new edition featured a comprehensive explanation of happenings within the Star Atlas Economy.

The report aims to keep the Star Atlas community members in the loop of issues surrounding the platform’s economy. This way, members can stay updated and share their views about various activities and trends in the Star Atlas metaverse. Also, this report contains highlights as well as a detailed rundown of important events.

Notably, the first State of the Economy report was released in June 2022. The report unveiled quite a number of firsts, including Star Atlas’ first introduction of the labor force. In the same vein, this report shows how well events in the first report have transitioned and the way forward.

The second Star Atlas State of the Economy Report is now available! 📈🚀

This quarterly publication provides an overview of:

September 2022 – Star Atlas unveiled the second edition of its quarterly report, State of the Economy. The report provides members with a comprehensive economic view of the popular P2E game’s ecosystem. It highlights how the massive fall in prices continues to affect Star Atlas as well as other projects.

Majorly, the bear market has impacted the gaming metaverse. Star Atlas’ native tokens, ATLAS and POLIS, also experienced changes. ATLAS, for one, experienced a surge in its total emissions. Furthermore, the Star Atlas ships have surpassed POLIS and ATLAS in terms of prices.

Undoubtedly, events from the first report affected projects and prices. For example, ATMTA, Inc., developer of Star Atlas, announced that it would be adjusting the prices of primary market ships. This was immediately followed by massive ship sales within six days of the announcement. Interestingly, this might mean more ship purchases in the future.

“Despite challenging market conditions, including substantial headwinds in the global macroeconomy, we are pleased to report a modest decoupling within the virtual economy of Star Atlas,” said Co-Founder of Star Atlas and CEO of ATMTA, Inc., Michael Wagner, who added that “SCORE continues to maintain the stability of ship markets, while growth in the labor force broadened across all ship classes, a welcome change from the previous report.”

In addition to the information provided above, the report also unveils data across other categories. Over the last three months, the aggregate ATLAS wages per day grew by 4.4%. Similarly, the overall market value of Star Atlas ships went up by 5.9%.

Things went south for ship prices and the average wage per ship as they fell by -8.5% and -9.5%, respectively. Also, the overall employment rate per ship declined by -0.44%. On the brighter side, the labor force recorded an impressive growth of 14.3%.

Summarily, July witnessed the most recognized growth in overall wages. This was a result of members’ increased acquisition of higher-class ships. It accounted for the increase in the average ATLAS wages, taking it up by 5.8%.

As citizens are very vital to the metaverse’s sustainability, Star Atlas has taken the time to gather adequate data. Over the last three months, 12,591 new members were recorded, while 1,635 became residents. However, a total of 4,802 members left the Star Atlas metaverse.

While the platform’s metaverse houses androids and aliens, citizens also play huge roles in the ecosystem. For example, they influence about 22.2 of the total wealth flows. Also, they are the larger percentage of the POLIS token users, meaning they hold a greater portion of the metaverse’s political authority.

Considering the previous report, the labor market seems to be moving towards a reasonable high. However, unlike the first quarterly report, there is more accurate detail about what the market looks like. Above all, the labor force has experienced significant growth, and it is worth commending.

“Kudos to the Econ team as they continue to adapt their reporting – including adjusting the definition of who qualifies as a citizen with the addition of POLIS locking – to stay relevant as the Star Atlas ecosystem evolves.”

A 14.7% growth was recorded for XXS ships, being the highest pool growth in the period under review. Next is the Capital ships labor pool, which grew by 12.8%. Additionally, average net wages per ship went up for Large class and Capital ships, with Capital ships having a net wage growth of 15.3%.

In the period under review, XXS small ships’ tax rate remained at 23.7%, making it the highest effective tax rate. Commander Ships continued to stay behind with a tax rate of 13.8%. Similarly, the lowest tax rate was held by Capital ships at 12.9%.

Notably, the Ship Commission on Remote Expedition (SCORE) is the “primary source of ATLAS emissions” into the metaverse. Between June and August, Citizens and Residents claimed about 505.54 million ATLAS tokens in gross employment earnings. That is a daily addition of 5.495 million ATLAS tokens.

The platform is expected to generate more revenue, especially with the recent influx of new members. Also, with the release of a demo version of Epic Games, more fans are expected to join the ecosystem. In turn, this means more revenue.

What Is Star Atlas?

Star Atlas is a next-gen play-to-earn gaming platform that combines the power of stellar blockchain technology and decentralized finance with massive multiplayer mechanics. It is a strategy game that encompasses territorial relationships, politics, and metaverse experience.

Housed on the Solana blockchain, the platform offers an engaging gaming experience as well as cinematic quality visuals. By using Unreal Engine 5’s Nanite, the action-filled video game takes players through breathtaking gaming experiences. Additionally, the Solana network ensures smooth and secured gameplay, as it supports about 50,000 transactions per second.