What Really is Starlink?

Starlink is a virtual mix of real-world market activities. Other than these, the game revolves around the exploration, discovery, creation, and maintenance of in-game assets. The metaverse was created with a long-term goal in mind. “Live it like your alternate life”. This metaverse has several in-game activities, games, themed events going on to reflect that selling statement. The possibilities of organizing, controlling, and LIVING this second life among the stars are immense. Do you remember “Ready Player One”? Movies and concepts like Ready Player one are enough evidence that the concept of living alternate lives has become a point of huge interest among market enthusiasts. And, linking that model with a Play to Earn base, running on a 3D engine, is somewhat, a dream come true.

Not Just a Game

So, till now, we have been able to conclude that Starlink is not a game. Starlink is a metaverse that offers a wide variety of in-game activities, INCLUDING gaming, trading, heck, even clubbing. What’s impressive is that the metaverse has a “Play” option. And through this option, you can open yourself to not just a lot of games, but also to a lot of TYPES of games. You will find yourself playing RPG games, racing games, trading card games, etc. ALL under the umbrella of Starlink, yours truly.

The winnings that you make from these games and the experience that you gain from every activity in the metaverse will impact the metaverse itself. Your winnings will enable you to spend and invest in other facets of the metaverse, than just gaming. You can’t predict the aggregate impact of each activity, but this impact would surely create multiple resulting activities. And all these activities need a steady mode of exchange and store of value, and that is where the mechanics of the token comes in.

A little about Mechanics

We have firmly established that Starlink is a metaverse and not just another P2E game. The metaverse looks at a cryptocurrency-based economy. This cryptocurrency would be recording, enabling every single transaction that normal currency in the real world enables. These would include trading between players, financing modes of entertainment being supplied by other players in the game, basically, everything that you would expect the US dollar to do.

The metaverse allows a PVE gameplay. There are various missions and adventures that players can embark on within the game. These journeys are not just fillers but something that make the appeal of this metaverse even stronger, as it attracts more game time and boosts more reinvestment. Other than these PVE offerings, the metaverse also offers PVP models of gameplay such as battleship racing, shooting games inside spaceships, and even strategy conquest of rival worlds and their spaceships. And so, it becomes really difficult to describe the game mechanics of such a title.

Starlink is the kind of metaverse where there is really no defined route to determining the mechanics of the game. The mechanics evolve constantly as the community decides what more to bring into the game. This is what is meant by a TRULY decentralized metaverse. Where every component is being determined by the players investing their time, money, and efforts into the game.

The central space station hub will be the origin of each player’s gameplay. This station, along with several other space stations in the metaverse will also be the meeting points of players playing the game. Here, these players can make meaningful relationships, build teams, make rivalries, whatnot. Other than these space stations, there is a wide variety of shops, educational facilities, and areas of entertainment in and around the metaverse. As the metaverse expands with time, the developer plan to bring in more recreational outlets associated with these space stations. 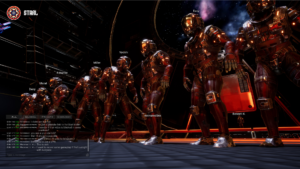 Starlink serves gamers with decentralized mechanics and an ever-evolving metaverse. How does it serve crypto traders? By enabling trading, maintenance, and competition of in-game assets. This part of the game is what determines whether a game is a P2E game or not.

$STARL is the token that is used as a medium of exchange in Starlink. $STARL is an ERC-20 token, which means it is one of the more pronounced tokens made by Ethereum. The coin can also be traded as a cryptocurrency in Ethereum’s blockchain for real money. There are roughly 10 trillion of these tokens in supply. Unlike many other tokens in the market, $STARL has been completely released in the game and there are no later inductions planned. Several other competitors in the market have the habit of introducing token unlocks to their offering, which disrupts the supply of the token sometimes.

How to Earn in Starlink

The P2E model in this game is fueled by ownership of a very diverse set of assets that are available to create, modify and trade in the game. A vast majority of these assets have their own dedicated NFTs. This gives these assets instant, real-world monetary value as players can later trade them for real currency. Moreover, these assets can be modified with a whole load of cosmetics available in-game. This way, base NFTs can add value to themselves, and become NFTs with a higher demand rating.

The one aspect of NFT trading that Starlink really counts on is the sale and purchase of Satellite NFTs. These satellites give an Annual Rate of Return to their owners.  These returns can be a great resource for ensuring a steady income of the $STARL token. Along with that, these satellites differ in terms of their altitude from the surface of the Earth. This determines their APR (annual rate of return) as well as the many in-game benefits they give to their owners. Such as travel benefits, income benefits and etc.

The Team Behind Starlink

Starlink has a very committed team sitting at the wheel. The team has a strong set of ideas on conducting a shop that would ensure longevity and integrity in-game. These ideals are evident in the team’s approach to decentralizing everything. To build a game that is more community-centric than any other. To follow the path of previous successful titles that were able to transfer their values onto their offering with the utmost conviction.

The team has a set of really talented moderators in the engagement team that study and dive deeper into the responses of players so that the ideal player-friendly ecosystem can be sustained.
Moving on, Starlink has a very impressive Artist guild that works on the designing of NFTs, GIFs, in-game cosmetics, and a lot more.

Starlink is one of the more sturdy metaverses in the industry that have been able to generate a lot of hype on social media. The game has a whopping 77.3K followers on Twitter, an incredibly active 2,000 members on their Discord server, and a quickly growing 1000+ followers on Instagram. Other than these, Starlink has one of the most active and loyal bands of 2000+ Redditors on its Reddit page.

The work that Starlink is doing is exemplary. There is no one that can deny that. Moving towards a metaverse that is purely decentralized and totally dependent on player response demand is a BIG gamble. You never know where the tides are going to turn next. So, all you can do is giddy-up and straighten your side of the balance.

Having said that, the game mechanics of Starlink is really impressive. There is a huge scope of economic activity as it is being triggered by literally every play in the game. This model can surely prove to be one of the more profitable P2E models in the industry. But, the commitment to take community centrism and response as the main guiding principles of the game’s science is risky! Surely, if the developers are able to cope with the demands of the community, Starlink may be headed for a massive valuation.