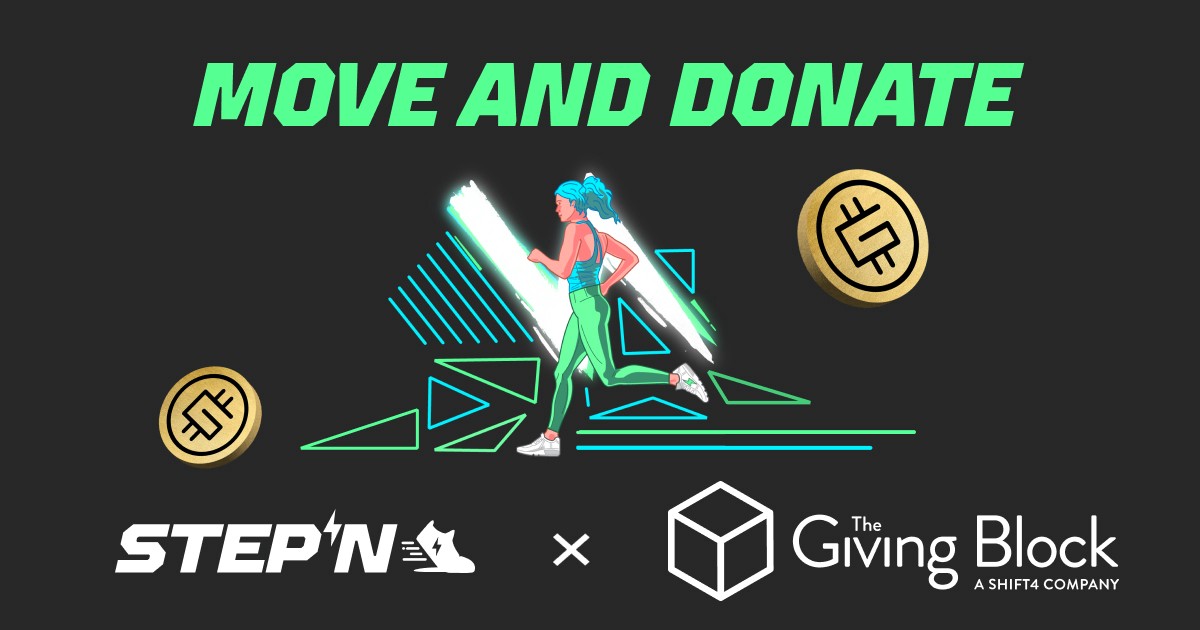 STEPN has activated the proposed charity project following its recent partnership with The Giving Block. The partnership was structured to allow STEPN users to donate GMT tokens to support charity. By so doing, they can give a helping hand to people in need all over the world.

According to The Giving Block, it is possible to give to charity through cryptocurrency means. With the project now live, users will be able to contribute to a tax-efficient philanthropic system. Notably, they will be given to various non-profit organizations (NPOs), which will eventually fund several causes around the world.

While STEPN is concerned with global welfare, it believes that its community members should be involved. To achieve this, the move-to-earn platform has deployed the GMT earning feature for users with Level 30 sneakers. This way, they will be able to donate their tokens for the greater good.

Move and Donate ⚡ #STEPN GMT earning is live, enabling users with level 30 sneakers to earn $GMT and donate to thousands of NPOs around the world through the leading Crypto Philanthropy platform @TheGivingBlock 🌏

Currently, the $GMT token earning feature is live on the STEPN app. However, it is open to all users, provided that they have Level 30 sneakers. This way, users can enjoy satisfying rewards from one of STEPN’s engaging features.

Following its collaboration with The Giving Block, users can have a positive impact on numerous global causes. At the moment, the platform urges its members to get up, move, and donate – to the world.

Giving Is Good for You!

From a layman’s view, among several activities for healthy living, giving is ridiculous. However, according to experts, giving keeps you healthy. But how?

Giving is classified as prosocial behavior, a behavior in which you show concern for other people. And the most common act of giving is a donation or prosocial spending. While some may see prosocial spending as a wasteful investment, it actually makes a positive mark on your overall well-being.

Spending on others boosts your mental and physical health, having effects like boosted mood, happiness, and stress reduction. Studies have revealed that prosocial spending is responsible for healthy cases of increased self-esteem, low risk of inflammation, and depression control.

Also, giving creates an avenue for you to increase your social interactions. With that, it reduces loneliness, which studies confirm to be as dangerous as smoking. Research shows that individuals aged 50 years and above, who engaged in volunteer services for about 2 hours per week, have a tendency to live longer.

Philanthropy Has Taken A Hit

While all these benefits are desirable, truth be told, philanthropy is currently going down the drain. Now, a greater percentage of people, especially Americans, are no longer considering charity giving. In fact, about 20 million Americans had already stopped giving to charity between the years 2000 and 2018, as reported by Vox.

But when you look at the brighter side of giving, it is worth it. This is evident in the way our psychological and physical systems earn rewards – by default – when we help others by giving.

With the increasing cases of depression, self-isolation, and low self-esteem, there is a need to change our ways. As such, it is never a bad idea to switch to charity giving, especially with the positive effects it brings.

Since it began operations, STEPN has been focused on “purpose over profits.” By sticking to this plan, the platform offered users an engaging move-to-earn gaming model over the last year. Fortunately, it has succeeded in positively reshaping people’s minds about active living.

STEPN is equally committed to promoting people’s overall well-being all over the world. The platform encourages physical health by ensuring that people stick to valuable fitness routines. Through the STEPN app, it revolutionizes the world of fitness tech by rewarding users for exercising.

Speaking on mental health, the fitness platform gets users outside their living rooms and their bodies active. According to studies, a fun-filled fitness routine often causes a great deal of satisfaction, which boosts your mental well-being. A major project in this context is the Burger Burn challenge held last month.

Similarly, STEPN supports social health by promoting healthy connections. By creating a community of users, the platform fights loneliness which skyrocketed during the COVID-19 pandemic. To further promote health, it has launched challenges, including September’s Best Running Friends Forever.

With just a single donation, the initiative will allow donors to give to multiple NPOs. This eliminates the stress of donating to multiple organizations manually.

Also, donors can give based on their desired causes, including mental health, poverty alleviation, technology, environmental protection, arts & culture, and lots more.

The Giving Block provides donors with a tax-efficient donation system while promoting global crypto adoption. Should donors give out a portion of their digital tokens, they can assist their preferred causes and simultaneously improve their health.

At the moment, STEPN is pumped about the partnership mainly because it provides two functions. Firstly, the philanthropic aspect of the GMT token is now an added utility. That is, GMT holders can impact the world with the power of their tokens.

Also, the process of donating comes after earning, which does not happen without active movement. This means that, while donors earn, they get health benefits in addition to feeling good about giving. STEPN looks forward to seeing many donors sowing good seeds into charity.