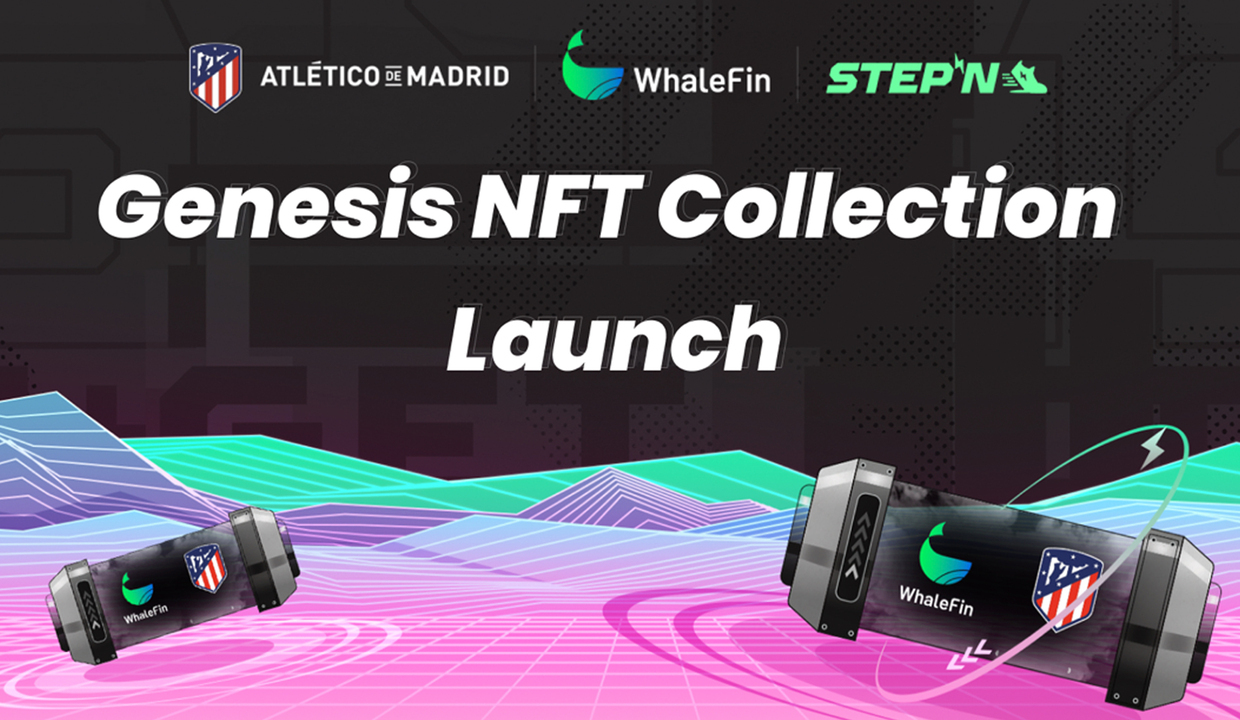 The unique NFT sneakers will be compatible with the popular STEPN move-to-earn game. They will also come with some exciting real-life perks and raffles for fans of football.

Some of these perks have already been announced. They include exclusive access to physical Atlético de Madrid merchandise, a VIP experience at an in-person game,  and WhaleFin NFT airdrops.

“This launch is an extremely meaningful event for us as it is the first time we issue co-branded Genesis sneakers with which real-world perks are associated.

“We believe this is a major stepping stone for us to continue bridging externality into the application!”

8/ This launch is an extremely meaningful event for us as it is the first time we issue co-branded Genesis sneakers with which real world perks are associated. We believe this is a major stepping stone for us to continue bridging externality into the application!

The exclusive STEPN NFT sneaker partnership collection will feature a total of 1,001 sneakers. They will be distributed among different rarity levels. Fans will be able to purchase common, uncommon, and rare ‘soccer boots’.

The sneakers will be ‘digitally hand-drawn’ and inspired by Atlético de Madrid’s trophies, players, and stadiums respectively.

The first stage of the launch will see a total of 200 sneakers released. Of the 200 sneakers, 180 will be ‘common’ sneakers, 19 will be uncommon, and there will be just one exclusive pair of rare sneakers up for grabs.

Interested M2E gamers and avid football fans can register their interest via the Whalefin website here. They will have the opportunity to purchase their sneakers via the Whalefin app from August 26 this year.

Why is the STEPN NFT sneaker partnership significant?

This new release marks an important development in STEPN’s journey. Not only will fans be able to acquire new NFT sneakers, but they will have real-life applications outside of the crypto space as well.

Merchandise, including signed jerseys, will also be on offer for owners of the NFT sneakers. STEPN has hinted that there will be ongoing perks for owners which are yet to be announced.

“This partnership with WhaleFin and Atlético de Madrid will bring a unique experience to fans around the world and it is a first-of-its-kind partnership for STEPN.

“Through this partnership, our goal is to connect the world of exercise to the web3 space and by providing tangible real-world rewards for the fans who hold a Genesis collection NFT.

“The launch of this collection is a pivotal step in our roadmap to unlock both the value of collectability and utility from NFTs and we see a huge potential to help our partners to better engage their audience with our product.”

This is another step toward making NFTs more appealing to mainstream users. Many P2E and NFT fans understand the intrinsic value of collections like these. But pairing them up with physical perks makes them attractive to a wider audience.

And this, in turn, could make STEPN even more appealing to mainstream fitness fans.

7/ We at #STEPN will pay for 20 Common sneakers, and raffle them as community rewards to give back to our loyal users. We want to thank you for staying and growing with us over the past few months.

STEPN launched these community rewards to thank its ‘loyal users’ for staying and growing with the company over the past few months. Accordingly, the raffle is a way for the lifestyle app to give back to its community.

STEPN’s fanbase is massive for a project of its type. The lifestyle app has more than 680,000 followers on Twitter alone.

What is a Genesis sneaker on STEPN?

All Genesis sneakers have a ‘G’ mark for identification purposes.

Genesis sneakers are long-term sneakers that will come with perks in the future, according to STEPN.

Popular YouTuber Barndog created a handy explainer video delving into the Genesis sneaker collections on STEPN and exactly what it means to own a STEPN Genesis sneaker.

What is Atlético de Madrid?

The club has more than 720,000 Twitter followers at the time of writing and created its own announcement about the new partnership on Twitter.

In a statement, Íñigo Aznar, the Chief Commercial Officer at Atlético de Madrid said: “This strategic alliance with WhaleFin opens a new world of possibilities for the club and for our fans worldwide.

“Exploring new ways to connect with our fan base and with communities like STEPN allows us to discover innovative possibilities offered by Web3”.

The new partnership comes with exciting perks for football fans and fans of Web3 and NFT gaming alike.