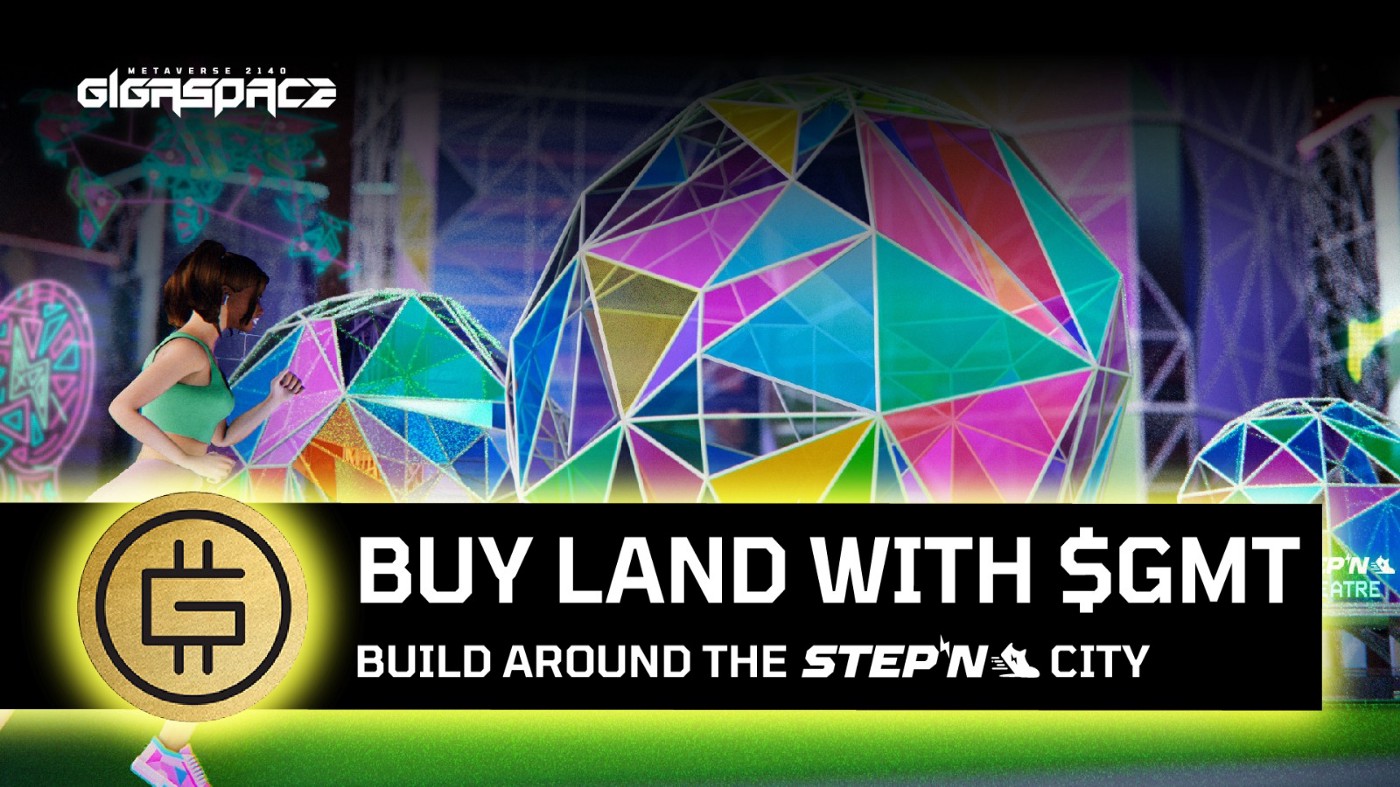 As a leading web3 lifestyle platform, STEPN is not new to partnerships that are beneficial to members of its community. For instance, the platform collaborated with The Giving Block towards the end of September to support charity. While STEPN uses these collaborations to create awareness about M2E projects, it is equally a welcome idea.

In the same vein, STEPN has announced that users can now purchase land NFTs on GigaSpace with their GMT tokens. This is good news, as users will be able to build on the GigaSpace metaverse. According to the announcement, the mint is scheduled for November 8. 2022.

With this, STEPN GMT holders can become Land owners with just their tokens. By extension, they can become city owners when they build on their lands. As announced by GigaSpace, GMT holders will be getting exclusive offers.

GigaSpace took to its Twitter handle to announce that it is already accepting STEPN GMT tokens for its upcoming Land NFT public sale. Following the acquisition, buyers will be able to build around the STEPN city in its metaverse. According to a release from the platform’s Medium handle, it shares the same vision as STEPN.

The web3 platform seeks to bridge the gap between web2 and the world of web3. And it hopes to achieve it – or move a step further towards it – through the SPACELAND sales. Furthermore, the GigaSpace Land NFT public sale is open to all GMT holders, and there are no other requirements.

“We share the same vision with STEPN – building a bridge connecting Web2 & Web3. Being a strong believer in STEPN, we’re offering $GMT holders an exclusive entry price point to buy a SPACELAND and build around the STEPN City.” – GigaSpace

Are you ready to build around the STEPN City in our metaverse? 🛸

As mentioned earlier, the GigaSpace Land FT public sale will hold on November 8, 2022, at exactly 12 pm. Interested buyers are expected to use the Metamask wallet only, as that is the only wallet supported for the sale. Additionally, the blockchain on which the Land NFT sale will hold is ERC-20.

The STEPN City on GigaSpace

While it is still under construction, GigaSpace hinted that the much-anticipated STEPN City will be a sports-themed city. In it, there will be various structures, including shopping malls, stadiums, and community spaces. This way, STEPN users and fans can connect with each other in a better and more immersive way.

Also, the STEPN City will be home to various community events courtesy of the platform, brands, and independent creators. Apart from that, there will be various STEPN goods up for sale throughout the city. So, members of the STEPN community are sure to get unforgettable experiences.

“The STEPN City will be a sports-themed city that includes buildings and facilities such as stadiums, shopping malls, and community space, where fans and supporters can buy STEPN merchandise, initiate community events, and interact with each other in a meaningful way.” – GigaSpace

Currently, the GigaSpace metaverse development team is working to make the STEPN City a dreamland. In the meantime, fans are welcome to “purchase the SPACELAND around the STEPN City.” This way, they can develop their communities “while benefiting from the high traffic from STEPN.”

Any Updates on STEPN City?

The GigaSpace metaverse architecture team released a few updates regarding the STEPN City on the platform’s metaverse. Firstly, the team has started doing some city planning as part of the development. This is to utilize the land in a better way that contributes to the overall look of the city’s interior and exterior.

As part of the planning, the STEPN tower will be located in the center of the city as a landmark. Then, structures like the stadium, shopping mall, maze, and community space will be built around it.

What About the STEPN Maze?

Some time ago, members of the STEPN community suggested that the STEPN city has a maze. According to them, the STEPN maze will be a lot of fun. And it will help players earn more rewards due to the fun-filled movements.

Consequently, the GigaSpace team decided to buy the idea and build a maze for walkers and runners. To spice up the experience, the team included missions in which players can earn energies and other rewards. This is opposed to the traditional idea of finding paths only.

In September, STEPN and GigaSpace signed a partnership deal for the anticipated STEPN City. Also, both platforms will be working closely to bring the web3 idea to the global spotlight. Interestingly, this is in line with GigaSpace’s mission, as it dubbed itself a Web5.0 metaverse.

STEPN is a popular move-to-earn platform that combines the power of social life and gaming with decentralized finance (DeFi). On the platform, users are rewarded in crypto when they engage in fitness activities like running. STEPN tracks the movements in their NFT Sneakers and credits their wallets with tokens.

By collaborating with GigaSpace, STEPN seeks to give more engaging experiences to its users. Furthermore, GigaSpace states that the STEPN City will be opened in phases after the platform’s alpha launch. From the amazing structures to the events, the city is expected to hit the headlines.

“The STEPN City is currently under development and will be available in phases after GigaSpace alpha launch. Our objective is to provide a virtual space where the fans from around the world can gather easily, not limited by geographical barriers.” – GigaSpace

GigaSpace is a metaverse creation platform focused on building the world’s first Web5 metaverse. It hopes to achieve this goal by creating strong connections between web2 and web3 worlds.

Additionally, the platform is committed to spreading the gospel of Web3 projects. As a result, it has entered strategic partnerships with quite many brands. Among them are Interference, Kabrita, Empyrean, Brandoville, Q-pets, Madworld, UCOLLEX, Gym Aesthetics, ENERGYWATT, Animoca Brands, Alfa Logistics, and Artaverse.