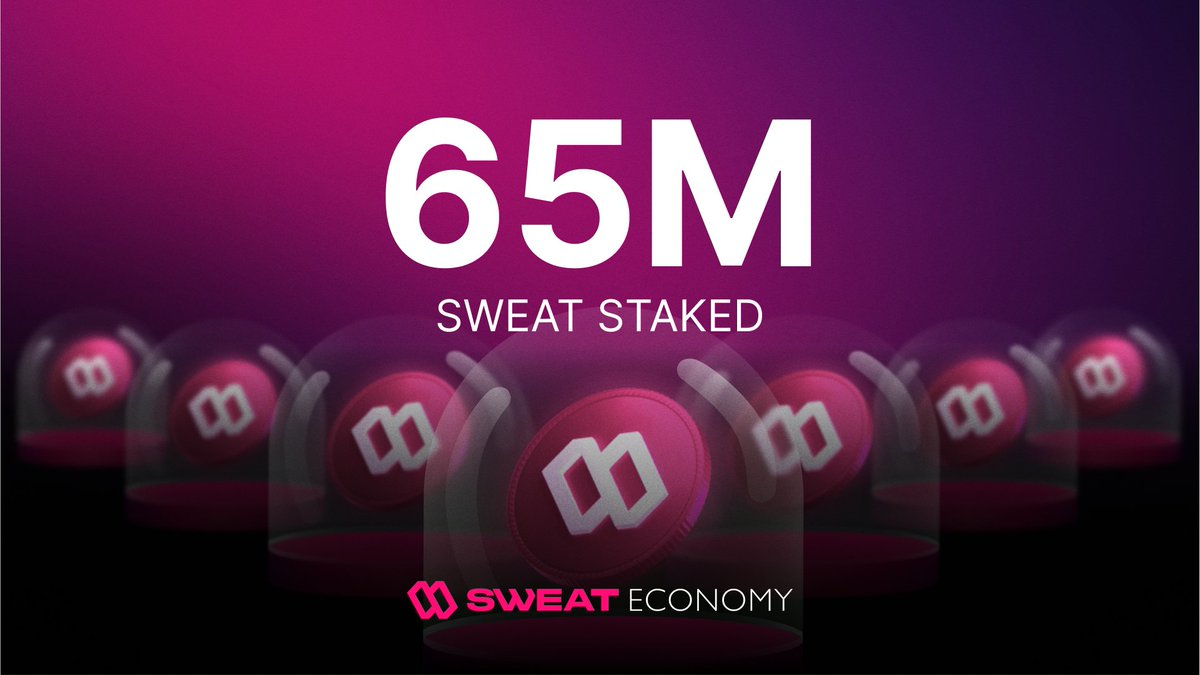 Over the last few weeks, Sweat Economy has recorded quite a number of successes, with its fame spreading across over 115 countries. Thanks to its amazing projects, the platform has proven that it owns a seat among the best move-to-earn projects in the world.

Today, the Sweat Economy has hit a huge landmark – a total of 65 million SWEAT tokens have been staked in the SWEAT Wallet. The announcement signifies the platform’s satisfaction with how things are going. While it seems like a merry announcement, in the real sense, it is a step ahead for the company and its community of users.

Recently, Sweat Economy launched the Staking Rewards program in collaboration with NEAR protocol and the popular DeFi platform, Ref Finance.

The launch was well accepted by users who went to function as liquidity providers. With the program coming to a close, it is important for Sweat Economy to let its users know how well things are.

Before this huge achievement, the Sweat Economy has been making positive improvements. One is its increasing popularity. As of now, the SWEAT Wallet app has claimed the top spot as the No. 1 finance app in 51 countries. Also, it is among the top 5 finance apps across 115 countries. Not only that, but it also is the most downloaded application across 8 countries.

Happenings Before the Landmark

Prior to the recent announcement, Sweat Economy has been doing great exploits in the Web3 space, especially with its Staking Rewards program.

Just yesterday, it announced that to mark the end of its Staking Rewards program, it will give away 6,000 Amazon Gift Cards to its loyal members. This way, more users were able to join and stake. Staking on the SWEAT Wallet was the only requirement to become eligible for the giveaway.

Similarly, the platform launched a reward program to commemorate the 2022 FIFA World Cup scheduled for Qatar. Following the program, winners were selected with mouth-watering prizes.

Additionally, Sweat Economy offered its users a 400% annual percentage yield (APY) on their stakes. The users – who are expected to stake their SWEAT tokens – were promised 12% APY by Sweat Economy. However, positive changes happened and now, users get 400% APY as their return on investment (ROI).

How Will This Landmark Affect Sweat Economy’s Future?

Although it is unclear what the future holds for Sweat Economy, a brighter future is anticipated. For a project that achieved 65 million stakes on a newly launched app, remaining at the top of its game is practically possible.

Also, there are projects undergoing testing and running, which are promised to give users more engaging experiences

Coupled with an exceptional team of developers running Sweat Economy, it has also partnered with quite some functional protocols. If all goes well, these partnerships will improve Sweat Economy’s services.

Furthermore, the landmark signifies the interest of many users in the project. With this, more users will join the platform. Another point to consider is that Sweat Economy makes its utilization easy and user-oriented. This is because of its transition from Web2 to Web3.

On Sweatcoin platform, users earn Sweatcoins for running, jogging, or walking. With the switch to Web3, stats show that most users joined the Web3 version of Sweatcoin without extra help. This proves how interactive the platform is. Currently, there are over 120 million users on the platform.