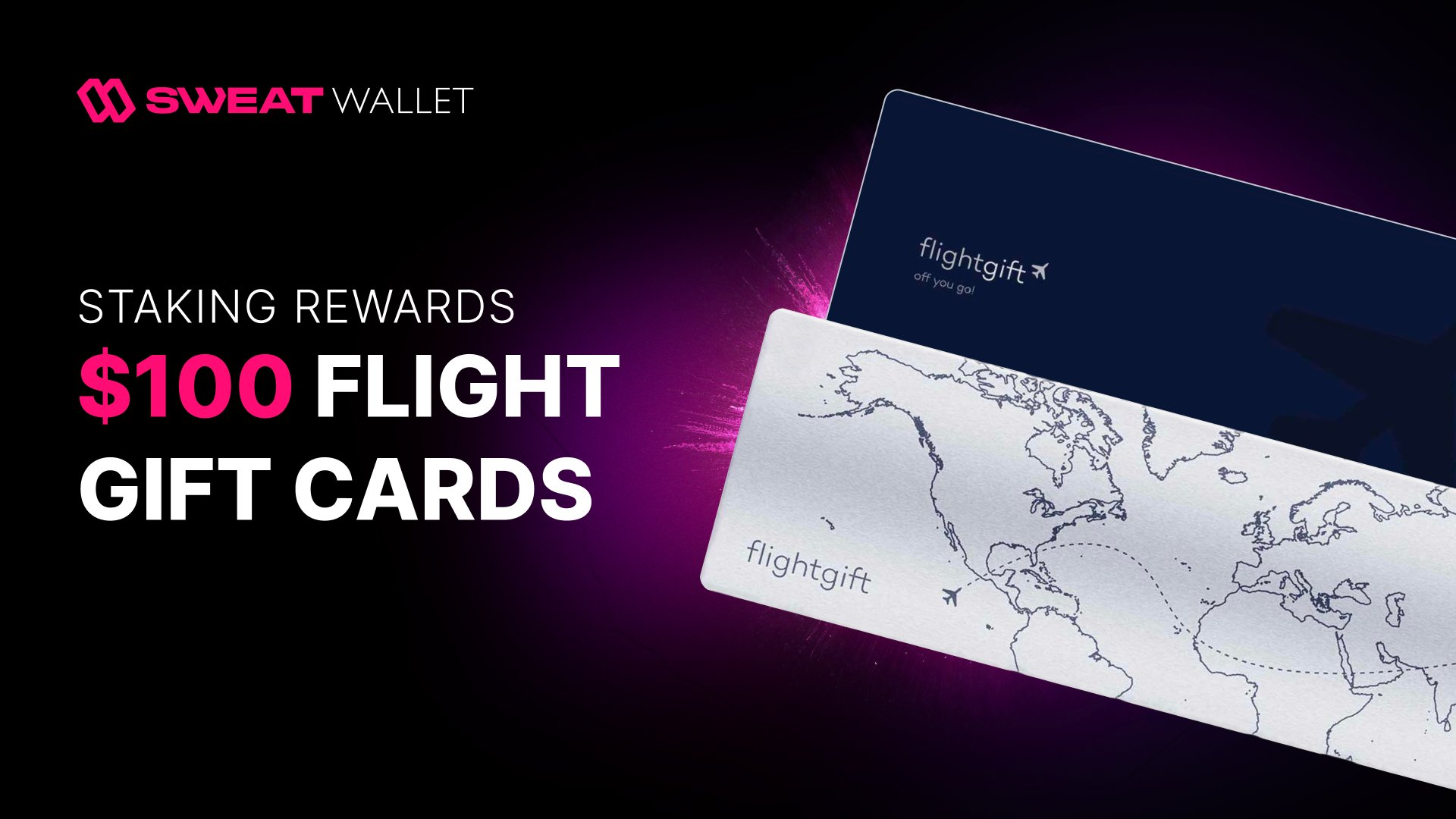 Sweat Economy is back with another round of rewards, and now, it is time to SWEAT around the world. The popular M2E platform has announced its plans to give out flight gift cards to its users. Like the previous giveaways, this is also part of Sweat Economy’s Staking Rewards program.

Since it began operations, Sweat Economy has been all about its users, prioritizing their experiences in the web3 space. As such, it will be giving out 300 flight gift cards to 300 lucky winners. Each flight gift card is worth $100 and can be used on all major global airlines.

✈️SWEAT around the world! ✈️

Live now: 300 flight gift cards worth $100 you can use on all major airlines worldwide💧 pic.twitter.com/AEK7Zx5Yen

As announced, Sweat Economy will be giving out 300 flight gift cards to 300 lucky winners. However, the popular M2E platform did not disclose whether there are specific procedures to follow to maximize winning chances. Notably, it is part of the platform’s staking rewards.

Notably, Staking Rewards giveaways from Sweat Economy are offered to SWEAT token stakers. As such, users can maximize their chances of winning by staking their SWEAT tokens in their SWEAT Wallets. This way, they are sure to be on the good side of the reward list.

With each flight gift card holding a worth of $100, users can use them on all major airlines worldwide. This is part of Sweat Economy’s plans to give back to its users, especially SWEAT token stakers.

Members of the SWEAT community are one energetic family that contributes largely to the success of the platform. This is evident in the way the SWEAT Wallet hit the top spot among the best financial apps. Currently, there are more than 120 million users in the SWEAT community, with a good percentage being stakers.

As expected, the announcement sparked mixed reactions from community members. While some were impressed by releases from Sweat Economy, others were unsure of their chances of winning. In view of that, here are random comments from users with regard to the update:

@simonladd3 emphasized how Sweat Economy is concerned about its community. He further went on to say that the rewards program can help in popularizing the platform beyond local levels. He said:

“Not only does Sweat love to see its community chase that sweet sweet SWEAT where you live, we want to see you spread the word of SWEAT internationally with this amazing prize of $100 of flights! So, where will you be SWEATIN if you win? Eat sleep SWEAT. #healthiswealth”

Not only does sweat love to see it's Community chase that sweet sweet SWEAT where you live, we want to see you spread the word of SWEAT internationally with this amazing prize of $100 of flights ✈️!

So where will you be SWEATIN if you win ?

Another user, @RedOark, who seems to be thrilled at happenings surrounding the Sweat ecosystem, commented:

“$Sweat is getting interesting by the day.”

Additionally, @AhmetYidz4646 – in his opinion – explained that the flight gift cards are worth $100 each. He claims that the price is low compared to his dream of traveling round the world. However, he commended the platform for a nice start by saying:

“Low reward for my dream of traveling [round] the world but not bad for a start. Thanks a lot @SweatEconomy, I love you. I believe that I will walk my dream with you.”

What About the Staking Rewards Program?

With the Staking Rewards program, users were able to earn more rewards by locking their tokens in a liquidity pool. They contribute their tokens into the SWEAT-NEAR pool and get higher profits as ROI. Furthermore, Sweat Economy organized the program in partnership with DeFi platforms, including NEAR protocol and Ref Finance.

Following the launch of the Staking Rewards program, Sweat Economy did not relent in hitting the headlines. In September, the platform launched its rewards program to celebrate the 2022 FIFA World Cup with users. Quite some rewards were attached including free accommodation and trip to Qatar, and free match tickets.

Also, the Sweat Foundation introduced a 50% policy for buying and burning of SWEAT tokens. By participating, users can earn 50% of profits when they burn their tokens. This way, the total supply is reduced, and the worth of SWEAT is increased.

Sweat Economy: So Far, So Good

Today, Sweat Economy is one of the most popular M2E platforms – in the world – that rewards its users. It plays a pivotal role in revolutionizing the crypto and web3 space by combining movement with decentralized financial techniques. This way, users can earn while immersing themselves in the move-to-earn space.

The platform has recorded quite many successes, especially after the launch of the SWEAT Wallet app. For instance, the app became the top-ranked financial app in 51 countries last month. Not only that, but the app also recorded a total of 20 million SWEAT token stakes in just one week.

With more than 120 million users on board, Sweat Economy has the potential to remain at the top for long. Also, the platform has collaborated with quite some platforms like Few and Far and Paras. This way, users can earn real value in form of cryptocurrencies and NFTs.