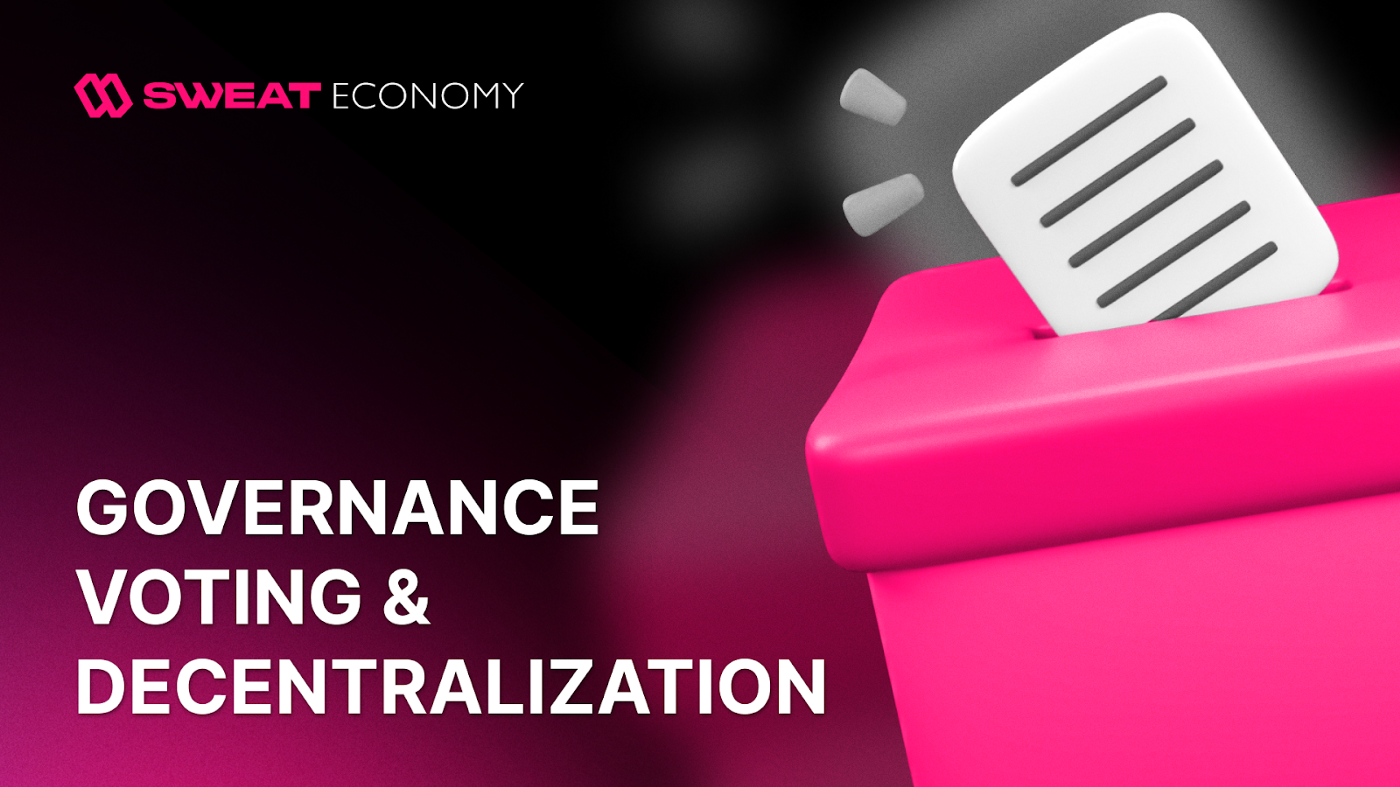 Sweat Economy, one of the most prominent M2E apps right now, has unveiled a detailed roadmap toward full decentralization.

The project has also revealed a robust governance mechanism that will gradually hand over the reins to the community over the months ahead.

Ultimately, Sweat plans to launch an open community where users are incentivized to share, create, and benefit from the Sweat Ecosystem.

The path to decentralization… 🗳️

💧We will gradually hand over decision making power to community

💧Starts with ‘Buy and vote’

According to the roadmap, one of the key steps towards full decentralization is the establishment of the Sweat Economy DAO. The DAO will work just the same way as any other DAO. Holders of SWEAT will get voting rights where they will contribute to key decisions about the project.

The Sweat team has acknowledged that building a successful DAO and moving towards a path of full decentralization won’t be easy. It will take time and a bit of fine-tuning before it’s finally done.

However, the move-to-earn app maintains that it intends to build a transparent and effective governance system.

The M2E platform also wants to make the DAO a key driver of the Sweat ecosystem, bringing community engagement to a whole new level.

The Sweat team has revealed the first decision of the Sweat DAO too. Holders of the SWEAT Token will get the chance to decide if the SWEAT bought back by the treasury will be burned or distributed back to the community.

The DAO will also be involved in ten other key decisions regarding the Sweat ecosystem. For starters, the community will decide what percentage of Sweat Economy’s revenue will be used in token buy and burn programs.

Also, the DAO will get to decide if and when the treasury will buy SWEAT and how to do it. Sweat plans to buy the coins, either discretionary or through automated processes. The community will need to decide between the two.

We are also learning that the DAO will be called upon to decide what to do with unclaimed airdrop tokens. The community could choose to have the tokens burned or distributed to new wallets.

Determining the Future of SWEAT

The Sweat Economy DAO is also expected to play a key role in shaping the future of the move-to-earn project. For starters, the community will get a much bigger say in determining minting difficulty for SWEAT.

Nonetheless, the Sweat team feels that such a decision should not be unilateral. Instead, any changes to minting difficulty will be decided by the community. There is also a plan to add an array of movement validators into the Sweat ecosystem.

Validators simply prevent cheating and will be essential in keeping the Sweat economy as transparent as possible. The community will get the chance to choose how these validators are deployed and how they integrate into the Sweat M2E app.

Finally, the DAO will also be involved in business decisions regarding Sweat. For example, the community will get the opportunity to decide how user data is monetized.

Also, the community will get a vote on future B2B partnerships and third-party product integrations.

Investments for The Future

The Sweat DAO will also maintain a treasury that will be used to make investments if need be. Right now, we don’t have any info on what kind of investments the Sweat team is considering. But it is likely they will all be based on building up the Sweat ecosystem.

All decisions by the treasury will also be subjected to a vote in the DAO. The DAO will also determine the scope of the Sweat treasury.

This means that the community will get to decide how far the money can go, which projects to fund, and the amounts of money to spend. However, the Sweat treasury deployment will likely come much later.

Transitioning Away from the Sweat Economy Foundation

For now, all decisions regarding Sweat Economy are made by the foundation. However, this will not be the same for long. As the DAO comes into force, the Sweat Foundation will actually be transitioned into a service provider.

In other words, the job of the foundation will be to execute the decisions of the DAO. This is not any different than any other crypto project run on a DAO. However, Sweat is just too big, and it will be interesting to see how the M2E project will juggle everything.

It’s also not clear how soon this transition will happen. From what we can gather, the foundation will continue to make decisions for the Sweat Economy until a fully functional DAO is in place. This could take months.