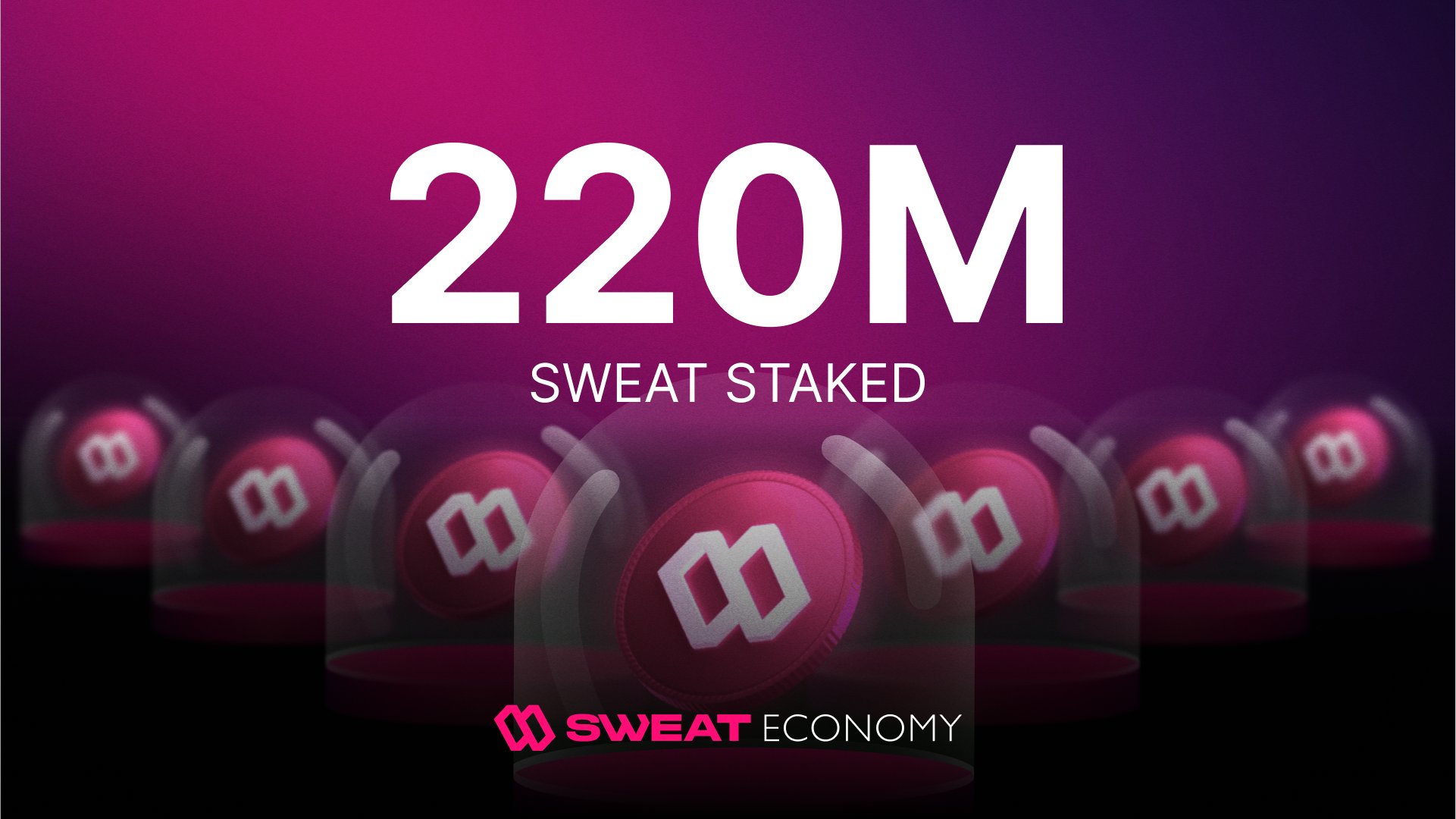 The Sweat team has released another staking update for its native token, SWEAT. According to the move-to-earn platform, nearly 220 million SWEAT tokens have already been staked in the Sweat Wallet.

This is almost double the number of SWEAT tokens staked from the previous update. The M2E platform sees SWEAT staking as an integral part of its ecosystem. The more users do it, the better.

Why is SWEAT Staking Growing

The growth of SWEAT staking is down to several key factors. Sweat Economy has been running a series of reward programs to incentivize staking within the sweat wallet. In fact, there is literally a giveaway every single week for Sweat stakers.

The M2E app has so far given away tickets to the ongoing Qatar World Cup. Stakers have also received concert tickets, signed football jerseys, gadgets, and so much more. But more importantly, Sweat Economy also offers both cash and crypto rewards for stakers.

In addition to this, SWEAT staking is designed to offer a more competitive pool. As of now, the Annual Percentage Yield is around 12%. But there are some pools that are offering way more than that.

In the few months since Sweat launched on web3, staking has dominated its success score so far. It is clear that the move-to-earn app is working extra hard to integrate staking as part of its overall M2E movement.

But why is this important? Well, to better understand the answer to this question, we ought to go back to the fundamental reason why Sweat Economy was launched. Although Sweat primarily wanted to be a move-to-earn app, the project also wanted to be a launchpad that transitions folks into web3.

This meant that in addition to the M2E aspect, Sweat Economy also worked on additional DeFi features that would make that transition into web3 much more fulfilling. Staking is simply part of these DeFi aspects within the Sweat Economy.

Expanding Utility in The Sweat Wallet

It is also important to note that all DeFi features within Sweat Economy are all fully integrated within the Sweat Wallet. This is actually an intentional move by the M2E app to expand the utility of the wallet.

Built on the Near Protocol, the wallet is designed to offer an integrated DeFi experience for people who are new to crypto. To this effect, the Sweat team has added an array of features here.

For example, just a few weeks after the app was officially launched, it announced a Fiat on Ramp program that allows folks to buy crypto using the Sweat Wallet. Sweat Economy, in fact, collaborated with some of the biggest crypto exchanges in the world to make this happen.

Initially, the plan was to make it easier for people to buy SWEAT in third-party exchanges within the Sweat Wallet. However, the Sweat team has slowly added support for other cryptocurrencies.

Venturing into NFTs and P2E Gaming

In addition to the DeFi aspects of the Sweat Wallet, the team has also integrated NFTs and a P2E casual game. The P2E game was also announced a few weeks ago, with the first beta expected to drop by the end of this year.

There is also talk of dynamic NFTs that will expand utility in the Sweat Wallet. Dubbed Sweat Legs, these NFTs come in different rarity levels. They will be needed to play the P2E game; in the future, the NFTs will also be a crucial aspect of the Sweat Economy universe.

The launch of the P2E game and dynamic NFTs is the clearest sign yet that the Sweat Economy project is not just about move-to-earn.

Although the idea of providing full web3 fitness remains at the core of its service, Sweat is pursuing a multipronged strategy that will ultimately ensure user retention and overall project sustainability.

Is Sweat Economy the King of M2E?

The M2E space is actually very new. For the best part of 2022, this sector was largely dominated by STEPN. However, it seems like Sweat Economy is slowly but surely earning its place at the top.

For example, according to the most recent update, Sweat Economy had already managed to reach 3.5 million active users. This is relatively higher compared to STEPN, which had about 3 million during its peak.

But what makes Sweat such an incredible project is the potential. Remember Sweat Economy is a web3 version of Sweatcoin, a web2 M2E app with over 120 million users. The only thing the Sweat team needs to do is to transition as many Sweatcoin users into web3.

This will undoubtedly make the app the hottest M2E project in the market. Besides, the fact that Sweat is also pursuing various web3 projects could help diversify its user base.