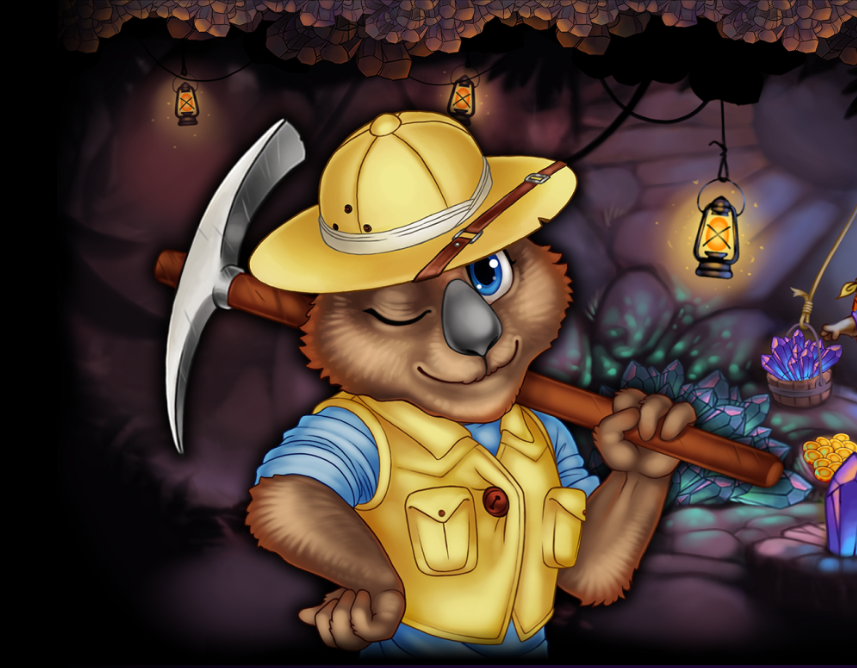 The Spielworks blockchain company is the creator of Wombat, which is an easy-to-use crypto wallet that allows gamers to earn extra gaming tokens on top of what they make inside the games. The platform also has its own play2earn game called Wombat Dungeon Master.

Wombat Dungeon Master is a multi-chain idle NFT staking game; it runs on both Eos and Wax. As of writing this article, it’s the 6th most played blockchain game on the Wax network per dapp radar’s data.

The gameplay of Wombat Dungeon Master

Wombat Dungeon Master is a role-playing game in which you play the role of a dungeon master. There are NFT treasures hidden in the dungeons, and your aim is to mine as many NFTs as possible through your wombats.

Wombats can explore the dungeons for 5 minutes, 1 hour, 6 hours, or a day. When they return, they can bring 3 types of rewards: experience points, materials (uranium, coal, iron), and every 24 hours, a chance to earn an NFT pack containing at least two game items.

You can use the NFT items you received as rewards to enhance your wombat to discover even more hidden NFTs. There’re 8 types of Dungeon Master items: light, digging tool, bag, hat, shoes, top, glasses, and amulet. Each type brings the NFT mining process different benefits. For example, Top items are good at increasing the experience points, while hats decrease the duration of the dungeon runs.

You can increase the items’ level by using the blending feature.

Moreover, players can trade the NFT items on marketplaces like Atomic Hub and Nefty Blocks.

As a first-time Wombat Dungeon Master player, you receive one wombat with standard statistics. Each wombat has the following stats, which directly influence the NFT treasures it can discover and mine.

You can increase your wombat’s level by sending it to more dungeon runs.

The treasure in the dungeons is comprised of NFTs that you and all other players have staked. Every NFT you stake has a different mining power which ranges between 1 and 10,000. The mining power influences your wombat’s dungeon run performance. In the beginning, a wombat can only use 10% of the mining power. When their level increases, mining power also increases. A level 12 wombat can, for instance, access 21% of NFT mining power.

What can you do with the materials?

Uranium, coal, and iron materials have a role in the crafting feature of the gameplay. Players can craft rare, valuable assets using this feature. For that purpose, they have to use crafting components known as wombatium.

It’s possible to blend the materials to produce wombatium. For instance, combining 50 Uranium with 1000 iron makes it possible to create one fairy wombatium. While you can’t trade materials, you’ll be able to sell or buy wombatium as NFTs in the marketplaces.

In the future, the Spielworks team will introduce more RPG features into the gameplay, for example, character progression.

The team’s aim is not only to develop NFT games but also to become a robust platform for other projects. That’s why they’re building an ecosystem where other projects can also thrive. Partner teams can access 1.5 million players, the Wombat wallet for simple handling of NFTs, and additional promotion opportunities.